The “entry thread” for my early 2022 to-do list. Posting nice pics of soaps to be chuffed about, once they're presentable. Regardelss if they have or haven't fulfilled their actual objective.

I won't start with the lard/vanilla/ZCS lollipop since it'll get some more weeks to eventually do something noteworthy in terms of discolouring. Finally, I gave it a hanger swirl. Without much of a concept, but IMHO it came out quite decent. My imagination sees a Hokusai-style surge approaching a steep coast (or an iceberg?) on a stormy day around 1912, recorded on a long yellowed b/w photograph.

“Titanic” because I have added what I thought was a titanic amount of titanium dioxide to the top layer, but it “sunk”: for one, the top layer is for some reason darker than the uncoloured bottom layer (what, then, should be the point of TD as a colour pigment???). And then, the TD didn't help the least to form glycerin rivers.
I cranked up water to 28% lye concentration, and put that kitten-love soap on a heating pad at 70°C for 24 hours. I even used nearly the same recipe as @KiwiMoose (except that I dropped the 5% avocado oil, and lifted rice bran oil instead). It was intensely gelling, and I let it cool as slowly as possible (average 4°C per hour) – but still not the faintest trace of glycerin rivers

The non-performance of the TD really surprised me. I have specifically bought new stuff in cosmetic quality. Have I got another crappy stuff? Looking very closely, I see that the TD has clumped – I've extra carefully pre-dispersed it in glycerol – somehow these droplets didn't like to be broken up?

Anyway, I just found out that the TD is indeed easily water-dispersible. So, it seems that this was another defeat in my quest for glycerin rivers, but this is likely not the end of the story yet…

Love the color! Surprised as all get out about the no glycerin rivers!
I adore black & white photos Why haven’t I made a B&W soap yet? Looking forward to seeing more!

LynetteO said:
Love the color! Surprised as all get out about the no glycerin rivers!
I adore black & white photos Why haven’t I made a B&W soap yet? Looking forward to seeing more!

Thank you! I'm very pleased by it too, though the choice of colours was kind of natural (OverzealousOwl wanted to squeeze too many objectives into one soap again

). The white for obvious reasons. The black was a reaction to the pure AC black that more often than not has a bit of a dirty and cold blueish-grey tinge. Counteracting this with the caramel worked quite well (and I had to add much less AC than would be needed otherwise).

Until you find time for doing one B/W soap for yourself, you can browse through the January 2015 challenge entries (the backstage thread is worth a peek as well).
Last edited: Jan 24, 2022

@ResolvableOwl How did you know my mind was spinning

loaf is set to be orange as 25g of Satsuma FO has been sitting in kaolin clay since yesterday.
Thanks for tip in achieving

black with use of caramel. Soap, photos, clothing just not as eye catching when it’s not a black black.

Yes. Quite sure there are some first “glycerin trickles” in the black parts, though it does look more grainy than river-y.
I have had caramel under similar conditions give a remotely leopard-like pattern: 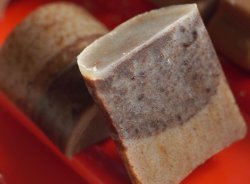 Pretty in its own way, but neither would I call it “glycerin rivers” proper, nor would I dare claim I could reproduce them. 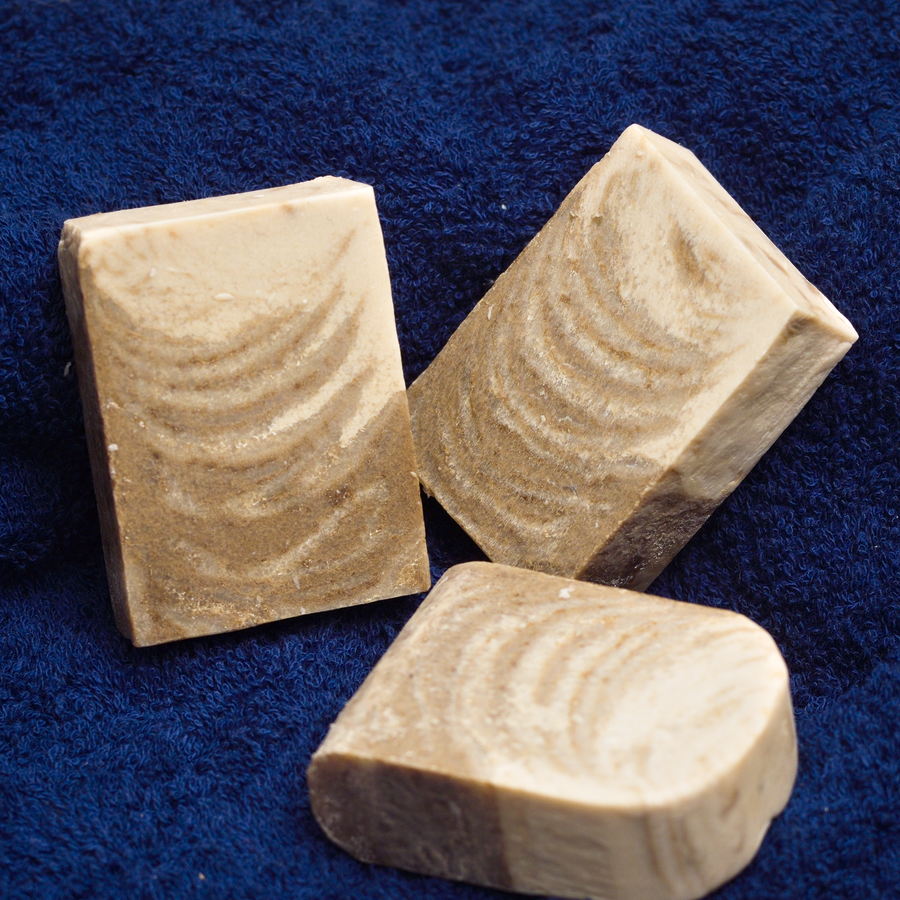 Caffè latte? Tea-in-first? Fir waldsterben? Yet another tiger-stripe-ish OPW? Things you have to sort out with your imagination. For me, meanwhile, it suffices, to say it in “Kiwiese”, to be quite chuffed!
This time I really overdid everything, in particular the titanium dioxide (I guess the wall-paint like colour of the suds want to tell me that a heaped tsp ppo is too much). Again paired with caramel colour. In my impression the caramel is even more affected from glycerin rivers than the TD.
I first added to the lye about a third of the caramel (looked like cola) and then the TD (looked like tea with milk), then the oils, and stirred it to light trace. Divided into two, and added the rest of the caramel to one half. Yes, the brown contains just as much TD as the cream! (just to underline that I definitely also overdid the caramel

To make the glycerin rivers stick out more (the tan lowers the contrast), I have also cut slices off the loaf with a planer: 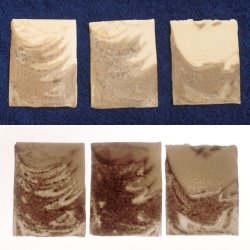 It is impressive how the batter “remembers” every step at which it has been divided and put together again in some way. Centimeter-scale “gaps” have built that consist of solid soap, though translucent and mostly free of any TD or knots of curdled caramel. Glycerin rivers are merciless how they enhance small differences in batter composition/treatment, and increase contrast. I like how these thin sheets highlight the “depth” that the rivers add to the patterns in the soap, that usually “sink” into thick bars.

Recipe-wise, this is my debut of the sLOVEnian tallow! Paired with macadamia and rice bran oil. Dual-lye (8% KOH) + sorbitol (+ the shorter-chain bubbly FAs from tallow) makes one hardly miss lauric oils – at least judging from the happy lather that went off the tools from cleaning.

The trimmings received an extra treatment: I kneaded them into something loosely similar to soap dough. Then (most roughly guesstimating proportions from memory) I added some 20%TOW MCT oil, and 80%TOW salt.
For the first minute or so, nothing interesting happened, except that the dough felt greasy due to the extra MCT oil. But then the salt “bit”, and the dough became firmer, and more and more brittle. By this time I had already shaped it. Just like leather-hard clay, it started to develop an intense gloss, and felt dry and no longer greasy at all! 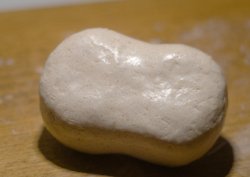 Better not speak about the colour (you know where it comes from). I literally could not have told the difference to clay at this point. I'm super excited how this dries up (if it crumbles away or stays solid, how it lathers/will compare to regular salt bars). That would be an easy, lazy short-cut to salt bars, with all artistic opportunities that soap dough is offering.

Caffè latte? Tea-in-first? Fir waldsterben? Yet another tiger-stripe-ish OPW? Things you have to sort out with your imagination. For me, meanwhile, it suffices, to say it in “Kiwiese”, to be quite chuffed!
Click to expand...

And I'm very chuffed for you RO!
Fantastisch!

Update on the soap from post #1: I've planed one bar into soap sheets (for further use as one-time/guest/travel soaps, totally not because planing is addictive). Wehn backlit, it's actually quite evident that there is going on actually a lot in terms of glycerin rivers in there; just with a bad contrast that makes it difficult to recognise when merely looing at a bar as-is. 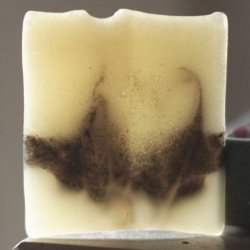