Hi everyone I'm Omar , a new soap maker and I love it , I started 6 months ago and I'm using HP only and just HP . I use Olive oils , coconut oils , castor oils , and tallow beef as a base for my soap .
Some times I add herbs to my soap and I use goat milk also .
I find this forum so helpful and rich with informations and I'm glad to be one of the members.
Thank you all

Hello and welcome! I usually do HP but this weekend did some CP as I didn't need to worry about a specific superfat. What is it about HP that claims your exclusivity?

Thank you
I like the HP cause I don't have to wait a long time curing process like the CP , I don't have that patience to wait 4 - 6 weeks .
The HP have some limits that make me thinking of using CP , especially when I use goat milk and some grounded herbs the hot lye burns my additives so I have to add them after my soap is gilled and make a Ph test to be sure there is no lye in my soap .
And some times it takes a lot of time to make one patch , the CP is much easier but also has its problems that makes me away from it .

These are 3 kinds of my soap contain goat milk and honey with oatmeal , sweet almond butter and grounded turmeric .
I made these for home use to try it with my family and some friends.
By the way I don't like to use colours or scents just pure as it .
K

Welcome to the forum, Omar!

Just a heads up, while HP soap is safe to use right away, it still benefits from a cure. I don't do HP, but some soapers here prefer to give it an even longer cure than CP, because more water is used.

Thank you
For my self I reduce the water and make it between 25% to 30% only when I use tallow beef I make it 35% .
And also after I cut it I leave it for about 1 week or 10 days before use it to let it harden enough .
S

I really hate that certain folks on YouTube put out bad information about HP not needing to cure. It really is not fair to folks trying to learn.

Aye, as above, if you give people soap before it is cured, you're doing yourself an injustice - hp soap is milder sooner but then it usually needs a longer cure to get the longevity.

Welcome to the world of Soapmaking Omar. As others mentioned, hp needs a long cure, really longer than cp. I cure all HP a min of 3 months usually more. Soap is not just drying out it is actually curing and benefits from the long cure such as mildness, lather, and longevity of the the bar. Good soap cannot be rushed :razz:

Hi
I'm not selling soap , I made it for my self and for some friends only .
For six months I only made about 15 kg soap , it start when I saw a youtube video about home made soap and I liked the process.
Every day from then I'm reading about it and how things work and still reading and learning .
Yes I need more information and more practice to be a soaper .
In my country there is no soap classes to attend , there for Uncle google is my teacher , youtube too , and your forum .
Thank you all for your informations and welcoming
K

You can learn everything you need to know between here and YouTube! No worries about not being able to attend a class, from what I've seen most of them aren't that great anyway

I'm mostly a CP girl myself, but I do HP when I'm making shave soaps or working with an ornery FO.

I agree with the others on HP needing to cure as long as CP (if not longer at times, depending). Unfortunately, there's a lot of misinformation out there on the interwebs that says otherwise, which makes it hard for newcomers to the craft to be able to discern truth from half-truths or outright myths.

If I really want to, I can safely use my water-discounted CP right away after unmolding, because it's my habit to fully gel it and it's always zap-free for me upon unmolding (as zap-free as cooking HP though the gel stage to zaplessness). But as I've found out time and time again after trying my soap (whether CP or HP) at different stages, it's nowhere near as pleasurable to use (or as long-lasting) as it is at 4 to 6 weeks down the road.

Of course, none of us means to say that that one cannot use their soap at whatever point they wish, but we just want to bring home the point that having a fully saponified and zapless soap on one's hands is really only just the beginning.

In other words, although the oils and lye have cleared their biggest chemical hurdle by becoming soap, several, slower, micro-processes are actually still going on inside the soap beyond that point that are gradually changing the crystalline structure of the soap- changes that work towards gradually increasing the soap's lathering abilities and that make the soap more mild and longer-lasting.

As many long-term soapers can attest to through their repeated experimentations over extended periods of time (even up to a year or more in certain instances), these changes just cannot be rushed.

I totally understand wanting to rush the process - especially when I was just getting started and didn't have cured soap overflowing ever surface. HP and CP soap really does improve with age. Just keep making it, have patience, and you'll have more than you know what to do with in short order.
S

My only soapmaking "classes" were this forum, a liquid soapmaking forum, and YouTube.

I'm so happy to be here , thank you very much all of you for all the help and info you are giving to me and to others , you are so generous .

Now I'm trying to make a facial soap for the second time with goat milk, honey and sweet almond butter the recipe is this

What do you think it's ok or need some adjustment???? 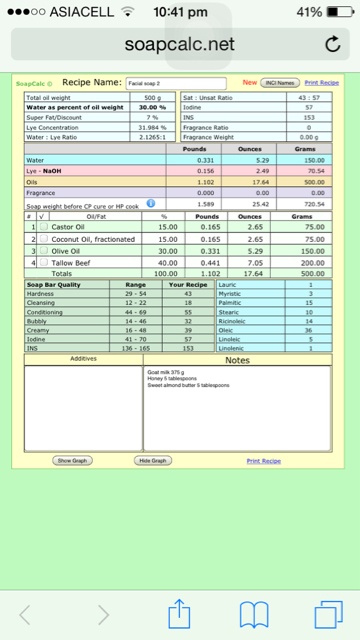