Luring me into HP land, aren't you?

Thanks for the photo update Dawni!

I can't see any discolouration of the lather, looking at the photo - nice!

SOOOOOO jealous of what your Dad brought you Dawni! Lovely!

I just realized the slight off color of the lather is probably from the charcoal, not the sandalwood.

@SaltedFig, thanks lol I know those phrases can't think why I didn't use them

Your soap is really beautiful. Please put it in the “win” column. The lather looks great for such a new soap.

Gotta love this forum that we want to see the most G-rated bathing photos! Soap only please.

Thankful to learn from you all.

Dawni said:
So, I figured since I have several from my dad to try, and some found locally, I'll start myself a series if that's OK with you guys

First one up, red sandalwood powder. In my research from the very reputable YouTube, and it's partner Google, most powders I've seen border on orange-ish, but they turn to different shades of lovely maroon-ish to "purple red" to pinkish.

My powder, which came from a very high end market (stall) in Karachi, Pakistan, from a dealer my dad called "the old man" as if he wasn't one himself, was more of a red wine color and not very fine. I wish I had taken a pic of it in the water coz it did look like a nice, dark wine. Next time...

Moving on.. Earlier yesterday (yep, it's 3am here), my soap cooked in about 10mins when I wasn't expecting it to, so I hurriedly dumped some powder (let's assume for example that wasn't my plan to begin with) onto the cooked soap. Oh yes, I HP btw. In my research I read that in CP that's how some got their color and figured, why not?

Utter fail. In terms of color only mind you, the soap is quite nice to use and looks fairly decent, just not sandalwood-y. For those who missed it in the other thread, here ya go. I dare you to find a trace of sandalwood in there lol
View attachment 35416
For several hours later, that lil bag of powder kept taunting me, and although I am normally not very confrontational, I decided to scorch that piece of.. emm.. wood.. with my lye. I soaked about 1.5tsps of powder in my water (which is still the faux seawater, popularized by @Zany_in_CO) for a couple of hours, strained it and then added my lye. Scorch it did not, but it was like turning water into wine. Color only again, I'm no miracle worker.

I proceeded to soap as normal. I forgot to take a pic at trace (more like I did not intend to because I didn't plan on a narration like this) but here's one about 3mins into the cook. Not very wine-y anymore but I'm not one to whine about my problems. Ehem..
View attachment 35417
And here's how the batter looked about 12mins into the cook, when I was again almost cursing sandalwood powder to hell n back. Why go through all the trouble and get that color, when I can get that easily enough with.. Oh, I don't know.. Umm.. Yeah.
View attachment 35418
As soon as those sides turned up the rest followed soon after. All in all this cook took me 20mins from trace to end. Took me longer to measure oils and get my additives ready. Coz yknow, when you already have a beautiful colored soap you just have to add more. Anyway, here it is cooked.
View attachment 35419
I sent a pic to my dad saying I tried the powder he gave me and still he says "oh you made fruit jam?" Hmmm.. You'd think someone younger might get it but nooooo.. I sent a pic to my SO, with the same message and he says "date paste? where'd you get the dates?" Men... Always thinking of food.

I am not particularly fond of plain soaps, I like contrast and I like anything with black in them. Including your souls bwahaha.. Ehem.. So I decided to add in some charcoal, and in the hopes of getting even more contrast with a lighter color, I added in dead sea mud mixed with titanium dioxide. Unfortunately, I didn't make it light enough. Another unfortunate things was, my lovely red soap isn't majorly red anymore.

I've been saying it, the universe is out to catch me by my back pockets and drag me back to the dark side (non-soaping side) and simply refuses to give me one perfect soap. Maybe coz I'm not a winer. So here's a pic of another set of stone soaps. I quite like it actually. Now that I know how to get the color I can always repeat if I wanted a red soap so this will have to do for now. I think it'll get lighter though.
View attachment 35420
Thus ends this rather long tale, of Dawni and the Sandalwood. A tale of courage, perseverance..... And soap

Narration greatly inspired by @Dennis.. And my slow cooker. Coz I had nothing but her, other than the dogs n cats, and my 18month old to talk to all day. And not for this long. Thank you for any who have made it til the end.
Click to expand...

Thankful to learn from you all.

It may not be what you envisioned but some of them almost look like brownies and now I am hungry!

Thanks @SYT.. You just reminded me of these red velvet brownies I saw the other day now I have a craving too lol 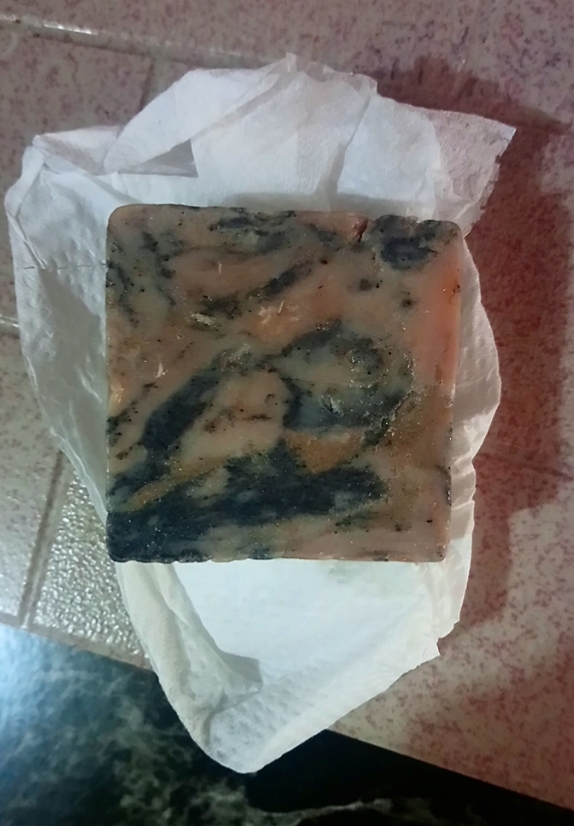 Still a reddish tinge but very muted compared to when it was freshly made. As pointed out by several others, salt n natural colorants don't do so well together. Maybe I'll try again with just a pinch of salt next time...

Still looks pretty though! Now it looks even more like red marble[emoji6]

I like the faded bar - the contrast looks good.

I think it's prettier now than it was while young.

They look awesome!!! Wow! I’ve yet to experiment with hot process. I love how the possiblitilies are endless with this stuff!

A great soapy tale! I love the soap. I think it looks like beautiful stone .

I missed the anniversary of this soap by about 9 days...

This is what it looks like after a year. 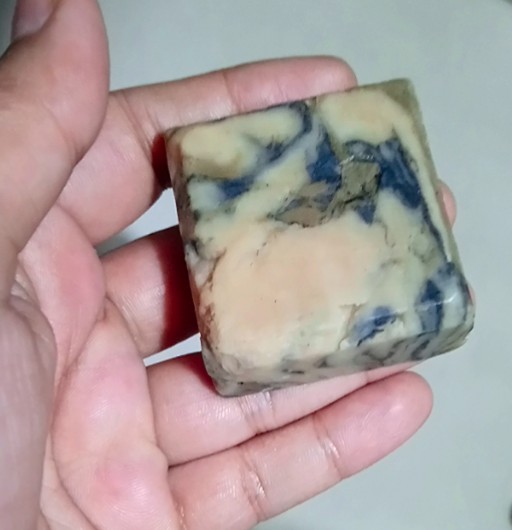 That dark red sandalwood is a pale pink in some parts, tan in others.. The brown is dead sea mud and black is charcoal.

Dawni said:
I missed the anniversary of this soap by about 9 days...

This is what it looks like after a year.
View attachment 43759
That dark red sandalwood is a pale pink in some parts, tan in others.. The brown is dead sea mud and black is charcoal.
Click to expand...

I love the look of that soap! Looks just like marble! Very very cool!

S
Chocolately goodness and the sea