I finally made my first shaving soap that is based on an MdC (Martin de Candre) clone recipe. I have read through the entire thread by Songwind that is on this. That has a lot of useful information and many variations of the recipe. I've read through the Badger and Blade (a site I frequent) that originated the MdC clone, as far as I know.

The recipe I ended up using is one I found on ultimatehpsoap.com. Though I think my entire process has been an almagamation of that post and things I've read in the Songwind thread.

It turned out pretty well. I'm still deciding if I used enough EOs for scent or if I have it just right. My scale started acting up when weighing the EOs, so I don't have an exact measurement of what I used. The soap is a little firmer than I thought it would be but my initial lather test was good. I know the soap is still curing but I tested it this morning and I was rewarded with a smooth shave.

I have 3.5 tubs that are a little over 100g each. Scented with sweet orange, bergamot, and patchouli EOs. 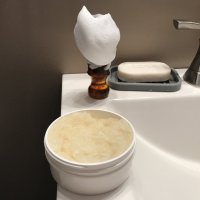 Thank you for your kind words.

I've tested it a couple of times since I made it. But I'm really trying to let it cure more.

The scent isn't exactly what I was hoping for but I think that is because my blend was off. It doesn't smell bad though.

Congrats! Taking on a dual-lye soap for your FIRST soap was quite ambitious - and sticking the landing was even better.

I'm also a fan of all the Ultimate Soap books by Ashlee Greene, given how detailed they are with the science and the process. Those books changed my finished soaps from decent to really nice (according to the family and friends who serve as my testers, aka soap-user-uppers-so-I-can-make-more-soap people).
You must log in or register to reply here.
Share:
Facebook Twitter Reddit Pinterest Tumblr WhatsApp Email Link