I made this yesterday night. I put it in molds at about 7 PM last night. I do not have a stick blender & used my whisk, sometimes attaching it to a hand-held blender, sometimes doing it by hand. I think I did about 10 minutes of blending but it never got to trace. I lost faith and looked up on the net that as long as you have mixed the two and an emulsion has formed it will form soap, so I poured it into plastic molds that I used to use for food containers and put it in a wooden box with a lid, and put it outside my apartment door.

This a.m. I checked them & they were yellowish and had solidified. I pressed a finger on the surface of one and it was soft, like butter left out for a few hours. I rubbed the oily finger on a hand - no stinging. It was emollient & I washed it off with water. This afternoon I checked again and the "soap" was a bit firmer. I did a zap with that finger and my tongue burned. It was like eating a bit of pepper. So now I know what zap is and I'm not scared of it. If I had read DeAnna's website I'd have known not to do this for another two days.

I realize that I superfatted quite a bit but I read that coconut oil is drying & superfatting is one way to compensate for that. (Yes, I know, I should come here & verify everything.)

BTW I chose coconut oil 76 degrees although my coconut oil is extra virgin from the grocery.

Anyway, that's my first batch. Fingers crossed. I hope my superfatting & too much water doesn't mess up the formula. 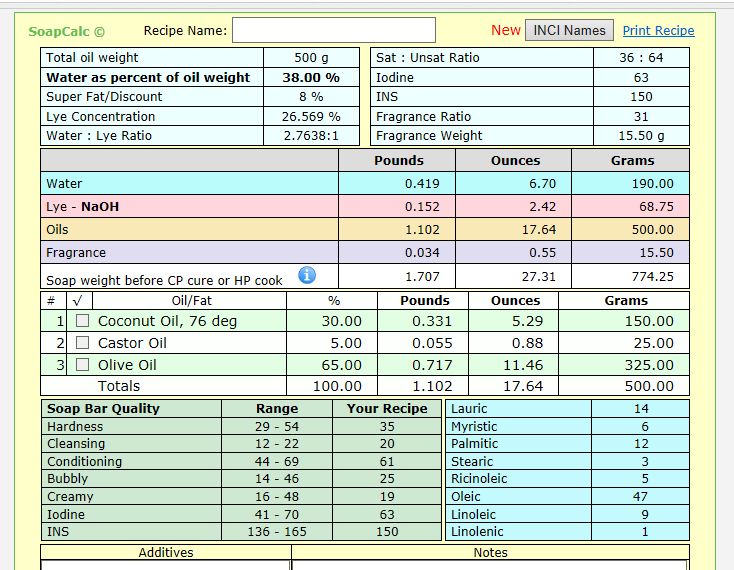 Part of the reason why your soap is so soft is your lye concentration is awfully low -- 26.6% -- but then you already know that. The lowest lye concentration I think is tolerable for any cold process soap is 28%, and even at 28% the soap may stay softer for longer than I prefer.

I am much happier with 31-33% lye concentration for most of my recipes. I seldom use a lower lye concentration except when I make soap very high in coconut oil. The extra water helps slow down the saponification and reduces overheating.

A major advantage of less water for most recipes is the soap will be firmer faster by using a little less water. You only need to change the lye concentration by a few percent to see a definite difference.

I think people would have fewer problems with their soaping if the idea of "water as % of oils" was done away with entirely. It's a traditional thing, however, and it isn't going to disappear just cuz I want it to. But I can always hope.

Re: the superfat: I've superfatted as high as 8 with such a formula before and it turned out fine, although not as hard or as long-lasting as my other formulas. I personally wouldn't go any higher than 8%, though (in a 65% OO formula, that is), but that's just me. I do sometimes use higher superfats than that in other soap formulas without a problem (20% and 13% respectively), but those particular formulas are completely different from the norm and can handle it.

I agree with DeeAnna- a 26% lye concentration (such as what your batch actually contains according to your SoapCalc sheet) is pretty excessive for a CP bar soap, especially one with a high amount of olive oil in it. That'll remain soft for a bit, and will most likely warp a bit during cure, but it'll be perfectly good to use when all is said and done.

My first ever olive oil soap was made with a lot of water, too. It took forever and a day to harden up nicely, but once it did (months later), it made a wonderful soap, albeit a bit warped around the edges.

Why did Soap Calc fail me?

PPS The soaps continue to harden. I don't mind waiting, or cosmetically un-beautiful soap. This is just for me and gifts. (Famous last words.)
Last edited: Feb 25, 2018

DianaMoon said:
Why did Soap Calc fail me?
Click to expand...

Can you clarify (I'm not sure in which way it failed you)? Did you enter in a value that it did not record?

So how did soap calc fail you? It is only a calculator and you enter your choices. Btw, stinging is not necessarily zap. Touch your tongue to a 9 volt battery and you will know zap Soap always stings me when I zap test

A-ha, I think I understand. Do you think it failed you because you felt a zap? If so, not to worry- SoapCalc did not fail you. Young soap can oftentimes present itself with a zap, most especially if the batter did not go through the gel stage*. As an example, my un-gelled batches can take anywhere from a few days, up to a full week to finally reach zaplessness. My gelled soaps, on the other hand, are zap-free upon unmolding, within 18 to 24 hours after pour.

*The gel-stage speeds up saponification

We're talking past one another --

No, Soap Cal failed me because the lye concentration was too low.

But I think what you are saying is that with 38% I got the right lye concentration and Soap Calc didn't fail me, I should lower the water percentage.

But how was I to know? It's trial & error & getting advice from more experienced soapers. I still see people on the net taking the 38% as gospel. If I hadn't posted this & you and DeeAnna responded I woudn't have known about the lye concentration being too low.

As far as the "soapcalc failed me", I don't see it that way. We're all learning what works and waht doesn't. Many soapers use "water as % of oils" for years 'n years, and they're going to continue to use it. It's only been in the past couple of years that I've learned enough about "water as % of oils" to explain to others why it's not such a good method. You're getting exposed to a way of thinking that's relatively new to a lot of us.

THANKS!! I was actually having fun going back and forth, but this is so much easier. Yes, it was right in front of my eyes but sometimes it helps to have someone point out the obvious.

I was joking about SoapCalc failing me. It wasn't SoapCalc, it was that I didn't know what water %age and lye% really meant. Making mistakes is the best way to find this out.

But it brings up a question about making master batches of lye solution, which came up on another thread.

Say I want to make up a master batch. I'd rather do that & get the lye mixing over with. I notice that the water to lye ratio is approx. 2:1 in a 33% concentration. Should I just mix up a 2:1 and be done with it?

BTW, my soap continues to solidify!

You certainly can make a 33% masterbatch (2 parts water to 1 part NaOH by weight). There's absolutely nothing wrong with that.

The reason why most of us make a 50% masterbatch is because we want the option to use other liquids besides water. For example some of my recipes call for milk and others use beer.

DeeAnna said:
The reason why most of us make a 50% masterbatch is because we want the option to use other liquids besides water. For example some of my recipes call for milk and others use beer.
Click to expand...

I’m a different beast. I use 50% because multiplying Soapmaker’s lye/potash numbers by 2 to get the desired lye solution is something I can do in my head. I can’t do that for any other concentration. It also helps with getting soap out of the mold quicker soaping at 50%. I make OO soap anyway, I get plenty of time to swirl.

The reason why most of us make a 50% masterbatch is because we want the option to use other liquids besides water. For example some of my recipes call for milk and others use beer.

Also, it is nice to have the option to dissolve additives like sugar or sodium citrate, or hydrate clays, etc with the extra water.

Update: I made a big mistake by not lining at least the bottom of my little 1 cup molds with freezer paper.
I decided to unmold one of them and it was impossible. Froze it for 15 minutes, ran a knife around the edge, to no avail. So I figured, what the heck, this is an experiment & I don't' care what it looks like, it is what it is, and cut it in the mold thinking I'd chisel out a piece. Still stuck. So I did the opposite & put it in hot water for 10 seconds and success.
They are not beautiful but I don't care what they look like and I learned my lesson. Line the molds. I'll try to unmold every day for the next few days to see if there are any differences in how the soap behaves. Perhaps harder soap will unmold easier...perhaps not.
I washed out the mold and got a decent lather. Washed my hands in the suds and there is no lye feeling. Next time I'll add a bit of fragrance.
Last edited: Feb 26, 2018

And that's certainly another valid reason.

The math to dilute a 50% solution to another concentration is truly not that difficult, but I can appreciate why it's nice to keep things super simple.