My first attempt at caning with soap

I love what people do with polymer clays and the process of caning. It seems like certain aspects to it should translate to soap so I gave it a go. I have to try something a little different because I got too many air pockets for one, and I had to use a fair amount of tapioca starch to prevent sticking while rolling it and I think it affected adhesion of the whole thing. Not a bad start though! It's very time-consuming though so i will wait a bit and think on it before i try again. 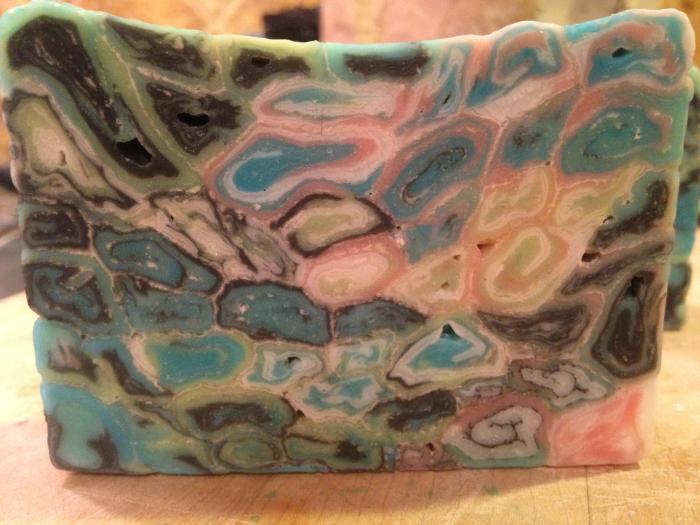 That is a super cool effect and really intriguing. How the heck did you roll it? Was a special recipe needed?
N

I used my regular recipe. It's actually my second attempt but effectively my first because for my first one, I rolled the soap out between sheets of cling wrap at about the 12 hours mark and then, leaving them sealed from the air, went back at the 24 hour mark to try to roll them. It was odd because they just broke and were not flexible at all as if they had saponified faster or something. I stacked them all up and they were well covered so it shouldn't be that they dried too much.

This time, I rolled them out at 12 hours but used a cutting board on the bottom and cling wrap on top. The cling wrap required a dusting of starch but the board side required a lot more and it think it makes it hard for the rolls to stick together in the mold. Next time, I'm rolling them out between two sheets of lightly dusted cling wrap. I have to figure out the best timing for my recipe to roll them out so they will not crack or break making such small rolls. I also want to use a lower water recipe because it seems like the colors stay more distinct but the timing will likely have to be spot on. I can see a lot of potential with it though.

Wow!
That is something that is years ahead of anything I can wrap my head around.
Really a great look and I get the concept. But all the timing.

Really cool. I'm about 8 months into my soap journey and I cannot fathom taking on a project like this. Amazing work.

Newbie, you are fearlessly creative. Cool idea, and I can totally see where you are going with this.

newbie you constantly awe me with your creativity. I wonder if heating before rolling might give it a little more pliability?
N

I don't know if it will roll out to small thin rolls after gelling. I thought it might if it were still warm but that is a very short window indeed. I have to try different timing with the batter; I was sorely disappointed with the roll-out done at 12 hours and checked at 24. I felt totally ripped off. I don't know if soap batter will hold the shapes like clay does. I suspect not but it seems like there is some potential in the concept, doesn't it?

I'm not so sure I'm fearless but I do like puzzles. There must be some way to utilize the concept. It's driving me mad!!

OH I love this

This is fantastic. I am a caner myself. Cant wait to see what you do.
I wanted to ask are you shaving it or just cutting it thin? Are you warming up the pieces as you fold/bend and have them in the wrap?? I am assuming you can bend if you warm it up. I am fairly new to soap so not as familiar with it as I am with Polymer.

I'm impressed newbie! I would never have the time or patience to attempt anything like that! I know you mentioned rolling the soap between sheets of cling wrap and leaving them covered. Did your cling wrap make an airtight seal? And did you use full water in your recipe?

Just asking because there might be some similar technique involved with this and the sculpted embeds made by Sorcery Soaps. I think she uses full water (supposedly no special recipe is required) and stores the soap in a ziploc bag immediately after unmolding. I've watched a few of her videos and in one of them I remember the consistency of the soap looked just like modeling clay but she also mentioned spritzing lightly with water to make it more pliable. Maybe you could borrow some of those techniques if you decide to try this again . . .
N

I read her posts about that so that is what I was trying. I saved some soap from last night and wrapped it well as soon as it was set enough to remove from the cup and stored it in a ziplock bag, then tried it quickly this am at about the 16 hour mark. It was pliable and I could mold it easily, but I pressed some out into a sheet and tried to roll it and that was awful. It split and was not at all of a texture that could take getting rolled into a sheet well and certainly not rolled up. I was, however, able to make a little shark with no issues at all but then I squished him and threw all the batter into the garbage. The psychopath in me came out. It was full water.

In order to roll in out into sheets and then roll that up without any breakage, the batter has to be very soft, or that's what my current tries are telling me. I don't know if it would hold a shape like a flower like how they make millefiori and then rolled thin. I might be able to get a spiral though, so I'll be trying that next as well as a few other roll designs. We'll see what happens.

Pretty cool newbie. But be careful about squishing and discarding sharks. They are known to carry a grudge.
D

Playing with sharks can get you bit! LOL!

They are beautiful newbie, it must have taken you hours. I would also love to give this technique a go. I found that I accidentally got really pliable soap by adding too much additives to the batter. Cocoa powder added to full water soap and oat powder both gave me results that I think would work well for this technique, maybe adding some cornflour or tapioca starch to the batter would make it a bit more pliable. Unfortunately I didn't note how much I put in.
N

I've taken bits of left over batter as I've been soaping to see if I can make it cleaner or use less starch and have had some success. I don't think I would be able to get a flower in there and roll it out like they do with polymer clays because the texture of the soap is so different, but who knows? Maybe I'll stumble onto something.
You must log in or register to reply here.
Share:
Facebook Twitter Reddit Pinterest Tumblr WhatsApp Email Link