Hi everybody.
I have finally got my hands on some beef fat. Thought I would render my own tallow. Been doing some reading and here is what I've come up with....
trim fat best you can.
melt in crock pot until clear.
LO or HI heat setting?? Does it matter?
Is there a time limit? Can you over cook??
skim junk off top as you go.
Strain final product into container of your choice.
Using cavity molds for individual portions.
Then freeze until needed.
Sounds very much like smelting metal.

I have attached a pdf print out. From soap maker friend. For reference.
Please have a look and let me know what you think? Thanks for looking.

That's awesome, @Ford! Your recipe would be too cleansing for my skin, but apparently many guys can tolerate a bit more cleansing power than women.

Some folks like to render in a crock pot, others put a pot in the oven around 200F. If you use a crock pot, I'd try the high setting first; the low would probably take forever.

I actually render my tallow in an electric turkey roaster pan at 200F or so. That temp will melt it without bubbling or spitting at me. I don't actually skim anything off mine as I go. Instead, as the liquid tallow starts to build up, I scoop it out and pour it through a strainer into a mixing pitcher with a handle, like the dollar store ones that are so often used for soapmaking. This container works well for me because it is round, has a wide opening, and is slightly sloped towards the bottom, all of which becomes important later.

I let the pitcher of fat cool to room temp on the counter, and then put it in the fridge. When the tallow has hardened up, I remove the tallow disk by pushing on an edge of it to release, or turning it upside down and banging it in the sink. Because the sides of this container are sloped, that makes the bottom of the disk smaller than the top, and it comes out easily. Way better than anything with straight sides or a narrow top opening!

Under the fat disk is some nasty, dark water that is poured down the drain. On the bottom of the tallow disk is some junk that is scraped off into a discard container (much better than having fat all over your trash bin).

After all my fat has been rendered, I do at least one "cleaning" round. Put 2-3" of water with 1 Tbsp of baking soda in a saucepan or stock pot big enough to hold all the tallow and leave some head space. Add the fat disk and melt it down on low heat. Leave it on a slow bubble, skimming off all the foam that comes to the top. This goes into the discard container with the junk that was scraped off the disk.

When no more foam is rising to the top, repeat the previous process of straining it into the pitcher, then cooling, hardening, and removing it from the pitcher. Toss out the water, and scrape any particles or junk off the bottom of the disk. That "cleaning" process is repeated as many time as necessary until the water under the fridge-hardened tallow disk is clear, and the tallow has no more smell. That can be one time or four+ times, and the end result can be white or off-white, depending on the fat source.

When the fat is all cleaned, I weigh it and then melt it down one more time with no water at all. Then I add ROE at .05% (one-half of one percent) by weight, to protect against rancidity. The idea of pouring it into cavity molds is great, but by the time I'm at this point, I'm OVER IT. So mine gets poured into a recycled 1lb coconut oil bucket, and then into the fridge it goes.

Thank you for the reply. Not sure of the breed it came from. So, color to be determined. Did not realize it took multiple passes. I would have melted once and called it quits. Recipe CO is on the high side. I started with 25% CO, OO, Tallow each. Last 25% AVO, butter, castor. Then just tweaked the numbers a little. (Maybe I'm using the wrong numbers?) Fell behind this spring. So, taking "Shave Soap 101". As a Summer course. Tallow is a good ingredient for shave soap. Thought I would make a batch of CP first. To get familiar with it. Thanks again. Moooooo......

That’s awesome @Ford! Yup, tallow is great for shave soap! If you have some stearic acid around, that would be great to add.

You do want to keep the CO low in shave soap, however, since you want tight creamy lather, not big fluffy bubbles.

CP is fine, but consider using dual lye (at least 40% KOH) and sugar (or sorbitol) to achieve that shaving cream type of lather that most folks are after.

There are some great shaving soap threads here, and @Professor Bernardo has shared some good recipes in them. Happy shaving and Happy Fourth of July!

We are covering ingredients. In shave soap101 class. And Tallow came up. Soooo, I have not used tallow up to now. And thought I would make a loaf of regular CP first. Sorry for changing subject's mid-sentence.
I have tried both CP and dual LYE shave recipes (from net). And dual lye is the way to go. Just gathering info so I can start making my own recipes. May the Fourth be with you! (someone had to say it).

I render a lot of tallow of all kinds. This is the method I se. Tallow rendering

Ford said:
May the Fourth be with you! (someone had to say it).
Click to expand...

Hi, just an update on my tallow project. Pics of the rendering. I used salt and went thru 2 cycles. 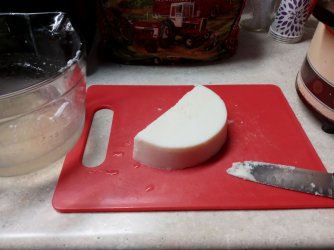 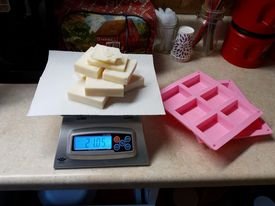 Smell was not bad. Beefy? Water was really clean after 1st cycle. Fat was really fresh and lean. The second cycle I used cavity molds. Hoping to make manageable portions. For storage. One thing I had read, hard to get out of mason jar. It is in the fridge for now.
I have scrapped the above recipe. Using the Lard recipe, I have. Swapping Tallow for Lard, kept the rest as is. (Rerun thru calc) This is a known recipe with one change. So, the difference should be noticeable?? I hope, maybe, could be, you never know, we'll, see?

Comments are always welcome. Did I forget anything??

Just received nurture order. With a 14-ounce test mold. So, come on weekend!!!

Ford said:
Comments are always welcome. Did I forget anything??
Click to expand...

Oakmoss to Offset the Odor of Lard & Tallow

When I first made rendered tallow soap I sent a bar to a high school classmate in Minneapolis. She said she loved it but when she showered with it she could smell hamburger!

I've kept a bottle of this in my soap box ever since. It's not only good for neutralizing the odor of animal fats, but it also can be used to "anchor" EO blends.

I'm not sure why you chose 1.7:1 water to lye ratio? Typically, that works well for high % liquid oils.

For your recipe, with high % hard oils, I would use
38% Water as percent of oil weight

@Ford Looks like a good recipe to me. It will be harder than your lard bars, will trace a tad faster, and be a tad more cleansing. Still nice soap!

My experience is that trace tends to slow down at 37% to about 40% lye concentration, so you should have no problem with your lye ratio. I use 1.5 to 1.7 with my high-lard and high-tallow recipes, and it really helps reduce or eliminate soda ash.

With my lye at room temp, and the oils around 100F, it works great!
F

Thank you everyone. 1.7:1 lye ration? Seemed to work best for me? consistent Batch weight across multiple recipes? Rather than using oil weight. I used 2.0:1 originally. But wanted less ash as well.

Yup, same here. Can’t wait to see how you like the soap and hope you post some pics.
F

Another update on the tallow project. ingredients went together as usual. Tallow did not like microwave. hissing and spitting.
I'll use a double boiler next time. Worked around 105 degrees Fahrenheit. small 16-ounce batch so no stick blender. Did not trace any faster than usual. A larger batch may trace faster? No color, no fragrance. First use of the mold. Be good for a 4 bar batch. 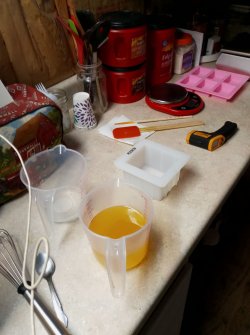 The cut, @ 24 hours. like slicing cheese. Used my waffle cutter. Thought it appropriate. Nice clean white bars. A slight smell of beef. But should fade over time. slight enough to cover with a fragrance. Have not lathered up a sliver slice as yet. 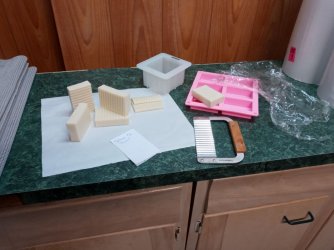 This was a nice learning experience. And distraction from a hectic schedule. Thank you for all the replies. TALLY HO!

S
Please help me with this recipe for a dishwashing soap