I've been using the same recipe the last few weeks that I used 2.5 years ago before I found soapmakingforum.com that has a soapmaking calculator. I was trying to plug my numbers into it and it is all a little confusing to me. I am expanding my old recipe from 12 bars to 18 bars now that I will have more cavity mold space. If anyone wants to plug my numbers in it to check it, that would be great. It is a really simple recipe that I got from someone before I found this site and other soapmaking calculators. Here is what will be the new batch formula.


this recipe will make 18 oval bars in a cavity mold set (3x6)
Check it out and tell me what you think. In the meantime, I will keep trying to plug these numbers into the SM calculator.

See pics. I plugged your 37.5 oz of lard into SMF with a 3% SF, plus 3% fragrance (which should be pretty light), and 2% of oils for the sugar. If you are doing this as CP, your water ratio was a little high, so I knocked it down to 2:1 water:lye, or a 33% lye concentration. I couldn't get it all in one screen shot, so these run from top to bottom down the left side of the calculator where you input all the numbers. Then the attached PDF is the recipe printout. HTH! 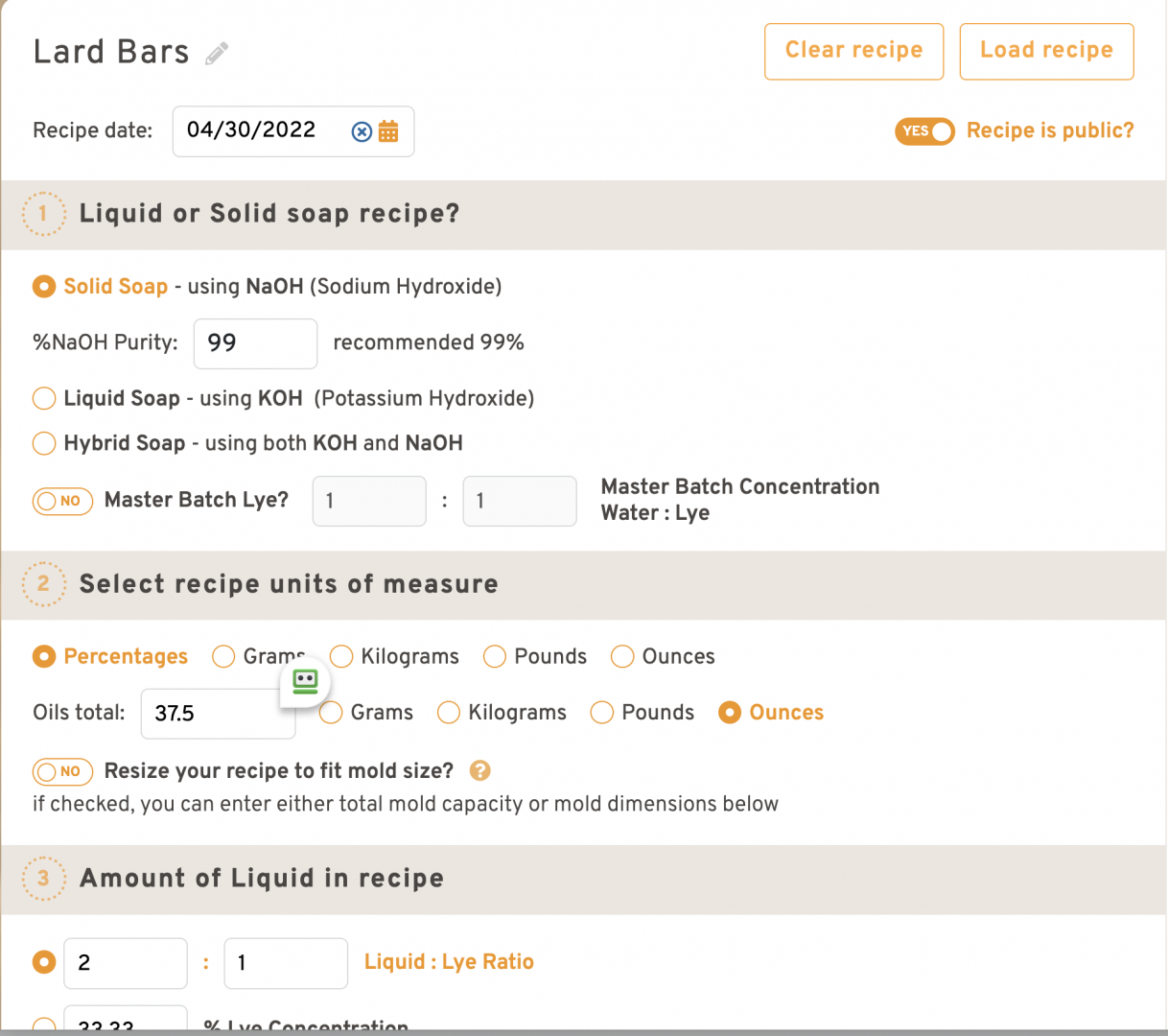 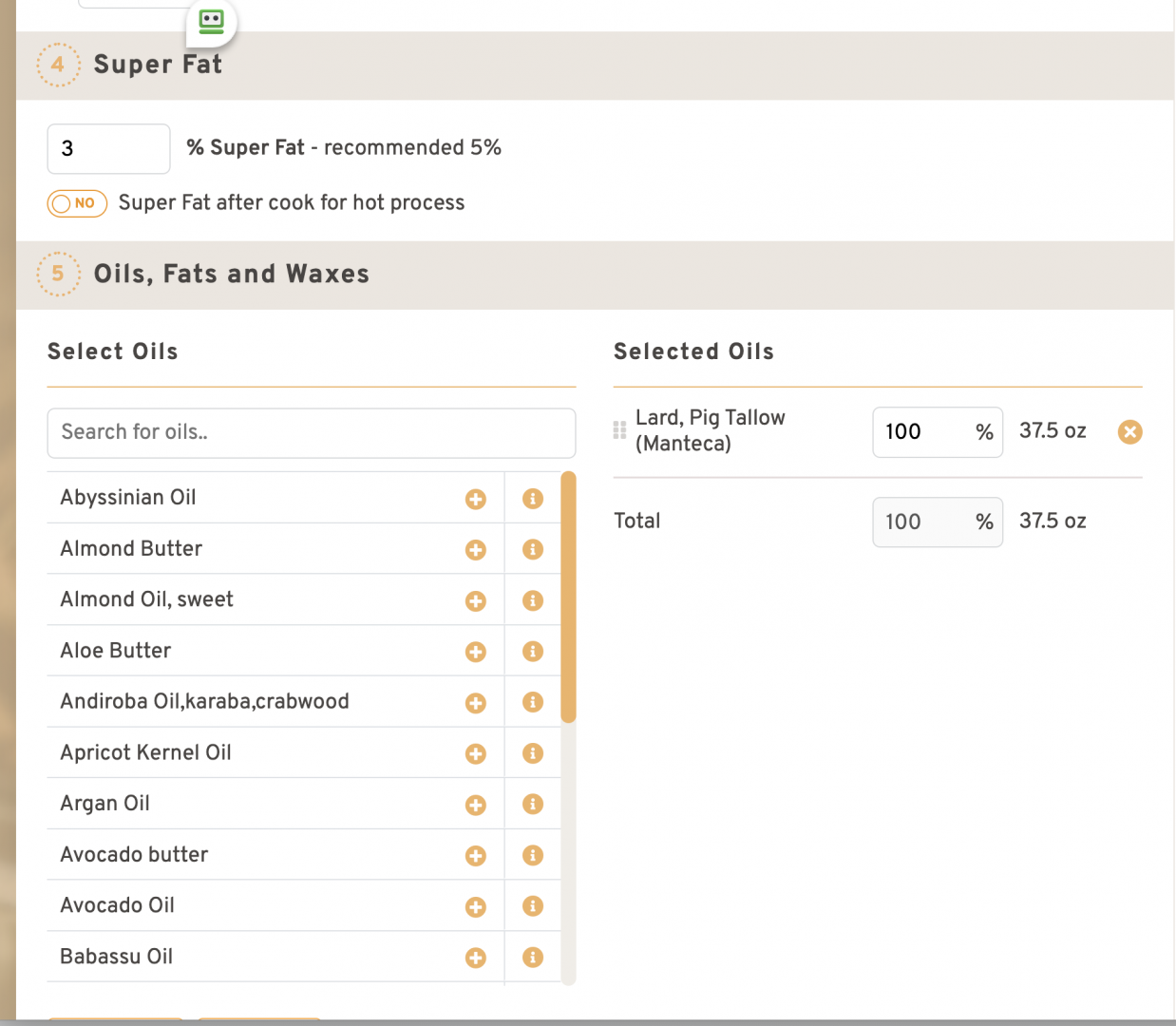 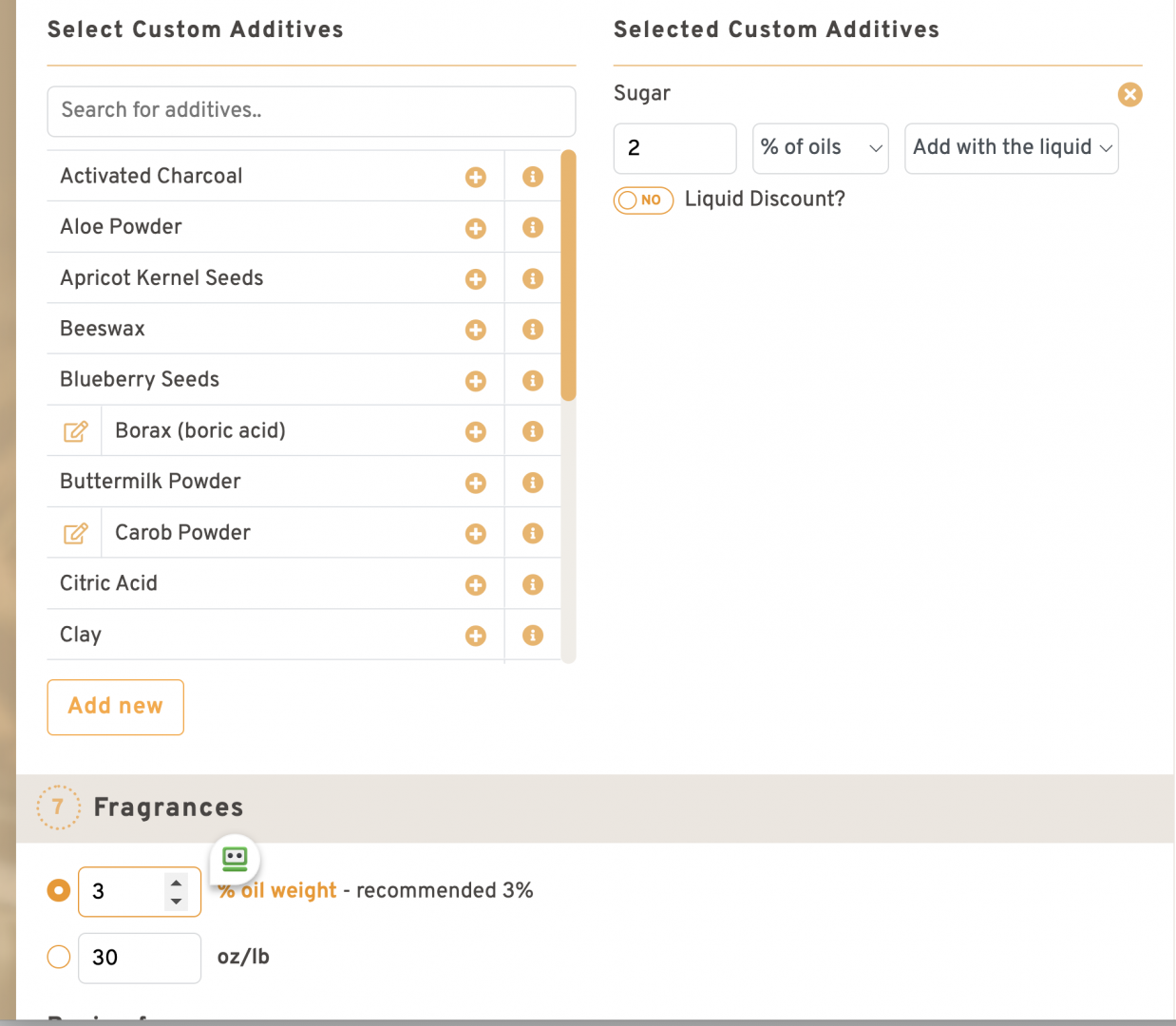 Thanks, I'll study this in the a.m. Dozing off here staring at the screen.

@AliOop I've studied the PDF file and now I'm looking at the soap calc and in comparison to my old recipe from unknown origin that my LYE concentration has been good all along. What has the overage of water in my old recipe been doing to the finished product and what should I expect going to a 2:1 H2O/NaOH ratio? How will it affect the trace? I assume that in the saponification process the water evaporates? Also what little amount of warm water should I use to dissolve the sugar and when is the best time to add to the mix?
I also have my scale as a factor. It only measures to the tenth of an oz and not 100ths so I am tweaking the recipe a bit to work with the scale.
LARD 38 oz
Water 10.4 oz
LYE 5.2 oz
FO 2.6% .99 oz I dropped it from 3% to make it where I can use 1 oz per batch
Sugar 1 tsp question about the warm water amount to dissolve the sugar. 1 oz? 2 oz?
Added: That's 3.04 oz per bar at mix and pour time.
Last edited: May 1, 2022

Let me clarify that lye concentration refers to the ratio of water to lye - not the amount of lye needed to saponify your oils.

So I think you meant to say that the amount of lye you had been using was correct, and I would agree with that.

Lye concentration is expressed as a percentage. It is also referred to as water:lye ratio - same thing, just said a different way. You were using a water:lye ratio of 2.3 (water) to 1 (lye). That is a lot of water for a cold process recipe, especially one where you don’t need extra time for swirls, and you are already using a slow-to-trace oil like lard.

The most typical water:lye ratio for CP beginners is 2:1. That translates into a 33% lye concentration. You can put either of those numbers into the soap calc and the other box will mirror it.

By using a little less water, your soap will trace a bit faster, harden sooner, and release more cleanly. The bars are also less likely to warp as they cure.

Now for the sugar. If you want to measure by volume instead of by weight, I’d use at least one tablespoon (not teaspoon) of sugar for each 16oz of oils. Some people use 2-3 T PPO.

You only need a little water to dissolve your sugar, and a little warmth to help it dissolve. Try using 2x the amount of water to the amount of sugar. So if you use 2T sugar, try dissolving that in 4T water. Pop the water in the microwave for 10-15 seconds and it should be just warmed.

It really is what works for you; how much sugar you use, or how you dissolve it - those aren’t hard or fast rules by any means. Just be sure it IS dissolved, and that you hold back at least an equal amount of water by weight to dissolve the weight of your lye. In our example, you have far more than enough water left to dissolve the lye.

You can mix the sugar water into the mixed and cooled lye solution, right before adding it to the batter. You can also mix it into your oils. Either way is perfectly fine.

It’s definitely ok to round the fragrance, water, and sugar numbers up or down to factor in your scale limitations. With NaOH, generally round down, never up. You may eventually want to switch to grams because they are smaller units, so rounding has less effect on the overall accuracy.

Brambleberry has a tutorial with information.