Ok, so this is my latest batch of soap, scented with mango papaya. I like my design on top but the rest was a total ITP swirl fail, lol. I knew I was over mixing even as I did it but my hand just kept stiring *facepalm*. Also because I'm super impatient I think it was still a touch too soft for slicing as the very bottoms crumbled a bit. Oh well it will teach me to cool my jets next time, as now I'm going to have to bevel my edges and I really don't want my soaps to have bevels.
In the end I think that this batch has a bit of an "earthy" look. 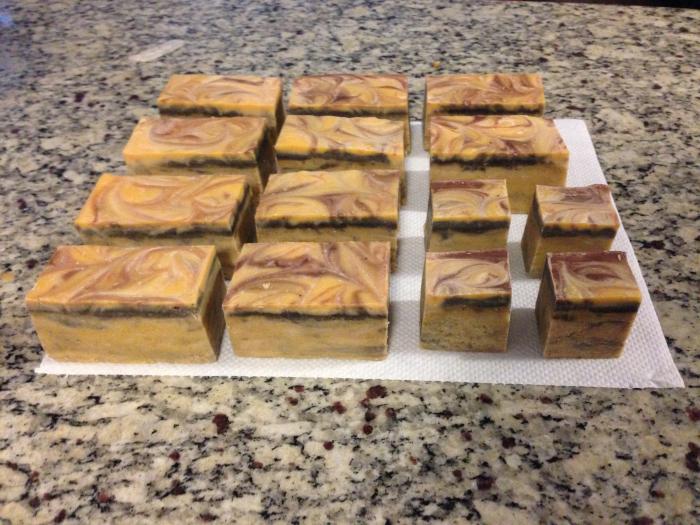 See I thought it was supposed to crumble if it was too late but my timing went: was in freezer for 24 hours to avoid gel, was in office for 24 hours to thaw, then I did my first attempt at cutting. My first cut was only 24 hours after the freeze. The bottom was a bit crumbly and the soap was damp so I gave it another 24 hours.
Soap was a little more firm but the bottom was still a bit crumbly when cut. This was also the longest I've ever kept my soap in the freezer though due to my work/sleep schedule that day. Normally it's only in there for 8 hours and then it's out to thaw and I cut it around 24 hours instead of 48, so maybe that's what did it to me.
I always thought that I might have be rushing it to slice within 24 hours but maybe that's just what my recipe prefers. *shrug* I'll be sure to go back to me shorter freeze/cut time next batch and see.

Ps. Re. the stirring, we have all been there!

Oh I knew people put soap in the fridge to avoid gel I didn't know they put it in the freezer. Sorry I can't help you as I gel all my soaps including goats milk to make them harder and the colours brighter.

I hope someone who knows about avoiding gel comes along to help you trouble shoot.

penelopejane said:
Congratulations!
The bottom of the soap doesn't crumble if it is too early to cut. If anything that happens when it is cut too late.
Click to expand...

Actually some soap, especially un-gelled, can certainly crumble on the bottom when it is cut to soon
I really like the color of your soaps

cmzaha said:
Actually some soap, especially un-gelled, can certainly crumble on the bottom when it is cut to soon
I really like the color of your soaps
Click to expand...

Thanks cmzaha, I have removed my quote because it is wrong. Sorry everyone.

I have only had a soap crumble when I cut them too late.
Soaps that I cut too early are mushy.
M

penelopejane said:
Thanks cmzaha, I have removed my quote because it is wrong. Sorry everyone.

I have only had a soap crumble when I cut them too late.
Soaps that I cut too early are mushy.
Click to expand...

Oh that's probably where our wires got crossed. It didn't crumble at the bottom because it was hard, it crumbled in the edges where the knife cut because it was still too soft and tender from thawing out. That's why it crumbled less on my second attempt to cut it later. I just checked on it and sliced one of my sample squares. If I had left it until today slicing would have been pretty perfect. Could probably even hold off another day. I love the way we just keep playing, testing and learning.

Thanks for saying so. Swirls have become the bane of my existence. I still can't get them right *le sigh*.

They look good to me. I am not an expert swirler either. I usually opt for ITPS unless I am trying something new.
M

lsg said:
They look good to me. I am not an expert swirler either. I usually opt for ITPS unless I am trying something new.
Click to expand...