Okay, so tonight I *attempted* to make a pumpkin scented soap with a bit of pumpkin puree and some oatmeal added.
I used a recipe I have used before, but I have not used that FO before, and I have no idea if it could even be the culprit of what happened with this batch.

It blended to trace just fine, then I separated it into two containers. Approximately 3lbs with the 3oz of pumpkin added, and the other 4.5lbs was to remain white.
After I blended the pumpkin in I added some fine ground oatmeal, then blended that in. Everything looked good, then I added the FO and blended both buckets until I had a thicker trace in each container.
I poured the soap, did a little swirl and let it sit while I whipped up a frosting for the top. That took maybe 10 minutes. When I went back to the pumpkin soap I noticed a little oil built up in the corners of the mold.
Oh great, the FO is seeping out... or so I thought....:think:

Poked the soap to discover that is was just seeping TONS of oil out. :shock: Definitely not just the FO as there was only 2oz in the 7.5lb batch.

It just started pouring oil out over the sides, a little bit over half a paper towel roll of oil that I had to soak up, so probably 6-8oz of straight oil. Then I layered a bunch of paper towels on top of the soap so it would quit pouring over the sides.
It is still seeping oil, I need to change the paper towels again.

I superfatted this recipe at 9%, do you think if it sets it will be salvageable? Selling it is completely out of the question, but I might use it as a hand soap if it turns out to be okay after a very long cure.

Here is my recipe. 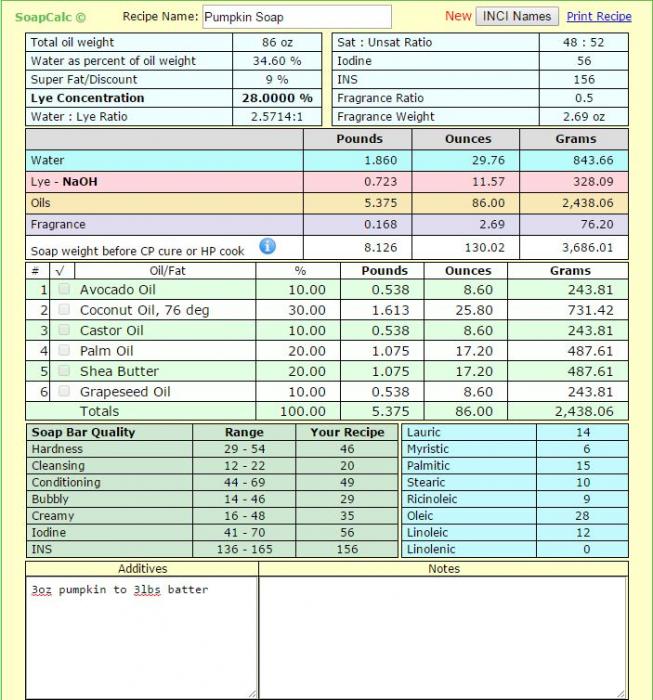 Was it in gel? It sounds like it got too hot and separated. When that happens, the best thing to do is toss it in a crock pot and cook it back together. Ifs its leaking that much oil, it probably won't set up and be ok on its own.

If its too much for your crock, try dumping it back into your soaping bowl and mixing it all back together. If it stays, it may turn out ok. I don't know how loosing that much oil will affect the soap but its worth trying since it was such a large batch.

If I take your words literally, then what I hear you saying is the batch almost volcanoed on you and it also got hot enough that the emulsion failed. But I'm not at all sure I'm following you correctly.

I'd agree with Obsidian that the best solution is to hot process this batch, but you should try to compensate for the loss of the oil.

Even though this recipe might be one you've made before, if you scale it up to a larger size and also add sugars (from the pumpkin), it's likely to heat up faster and hotter.
Last edited: Jan 13, 2016
N

What was the FO? Was it a spice one? Some FO's can cause soap to get very hot and it sounds like yours got so hot it separated or volcanoed.

Can you give the name and supplier of the FO? Someone here may have used it and can comment.

If you have kept your paper towels, you can weigh them and then compare the weight to the same number of unused paper towels to get a pretty good estimate of what you lost.
Last edited: Jan 13, 2016

The FO was "Homemade Pumpkin Pie" from Bulk Apothecary. I checked the temp when the oil was coming out, it was at 108, so it shouldn't have been too hot.

I had maybe 1/8 of an inch over the top of the silicone mold, but it was still below the top of wood that the mold was in. The soap must have expanded some for the oil to be pouring over the sides of the wood mold.

It seems to have stopped now and is setting a bit, looking semi normal.

When it was happening it looked just like soap batter, but if I had dumped half a bottle of olive oil on top. Like rivers of oil running through it and sitting on top, pouring over the sides.

For the batter to expand that much in that short of time suggests the center of the soap got pretty toasty pretty fast. And the soap can cool down fairly quickly too, once it expands enough to release any vapor buildup and force the warm oils to the surface. Even if you used a temperature probe to check the center of the loaf, you might have missed the moment when the center was at its hottest. And if you only used an infrared thermometer, you only got a surface temp and that would not tell you anything about what was going on internally.
Last edited: Jan 13, 2016
N

At a 0.3% usage rate, there are reviews of ricing and it is likely very spicy and those can really heat up, even at low rates. I would bet the FO contributed as well as having some extra sugar in there (the pumpkin). If it riced after you poured, which has happened to me and really ticks me off, you'd end up with an oil pit. I hope you can still save it.
K

Also, it looks like you used full water, did you reduce the water amount by the weight of your pumpkin? If not, on top of a fo issue, the extra liquid could have caused it to separate.

I used 25oz of water because of the pumpkin.

I don't have a crock pot so I ended up just leaving it in the mold. It did set up after it quit pouring oil out the top. I cut it at 9am this morning. The white part is perfect, no zap at all, the pumpkin part however does zap. It seems slightly less zappy tonight that it was this morning, but I may be imagining things.

If it is in the negative lye discount (which it probably is/ might be), will it ever cure enough to be safe for use? Or just be strictly for cleaning, if that.

With a heater up fo it is better to use less water. The more liquid the hotter the soap will become. You do not mention if you just added fo to the pumpkin portion, if you added it to all the soap batter you are not going to end up with white soap. I find when making pumpkin soap it is best to add the pumpkin to the full soap batch then use td to lighten a separated off portion. You concentrated the sugars in one portion of the batter by adding the pumpkin in one portion plus added more liquid to that portion, which could certainly cause severe over-heating and separation.

Good to know about the spice FOs and using less water!!

Before I added fo and pumpkin, I divided the batch in two separate buckets, added pumpkin to the smaller portion, but added the FO to both buckets and used TD on the bucket without the pumpkin.
N

If it's just slightly negatively superfatted, it will often cure out fine. A few people make their soap with a negative 2-3% SF and it will cure out well and non-zappy. It's definitely worth the wait to see, if your soap is otherwise looking good and seems to be getting less zappy. It may be easy on the tongue within the next day or two. I wouldn't sell it, but for personal use it could be no problem as long as your skin doesn't dislike it for some reason. Worst case, you grate it up for laundry soap.
Last edited: Jan 15, 2016

If it is in the negative it is probably at most -3% SF, and it if was it would have had to loose 11oz of oil from the entire batch, and I don't think it lost quite that much. Not sure how I would calculate how much the pumpkin part lost though, it's the only part of the soap that is zapping, so I assume that is the only part of the batter that lost oils... :think:
So I suppose I will play the waiting game with this one, and worst case scenario I'm totally fine with pumpkin pie scented laundry