Hello
I made gingerbread soap two weeks and it's been curing since. It has felt much softer than the other soaps I've made so I decided to cut it in half today to see what it looked like inside. It has a much lighter brown color evenly throughout the middle and it smells kind of funky in the middle too. I them decided to cut two other soaps of mine in half that are also curing from seperate batches and they have the same thing! Are all of my soaps lye heavy? Or is this normal for a soap that hasn't fully cured? I measure everything before using it and also always use a lye calc. The only thing I'm thinking is that my kitchen scale isn't digital. It's the kind that looks like a clock with numbers in 5 intervals wih little lines in between. I would think its accurate but now I'm not so sure. Please let me know of this is normal or if something's wrong. other than that all the soaps seem fine..they just look like Reeses Peanut butter cups inside!

PS: sorry for typing errors, i sent this from cell phone. 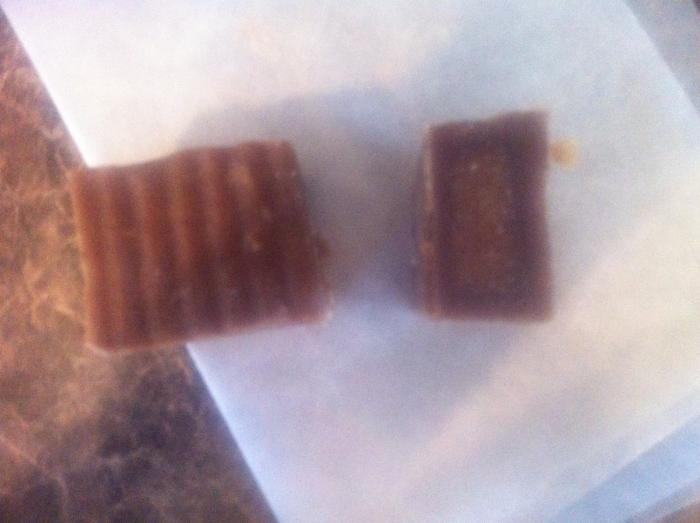 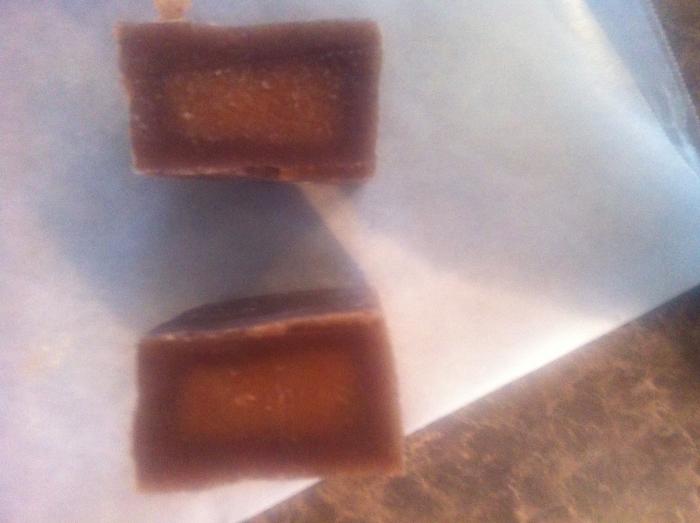 I would say partial gel, and that's what it seems to be, but normally a partial gel phase would make the inside dark and the outside a bit lighter, not the other way around. I doubt it's lye-heavy, lye-heavy soaps tend to be very dry and crumbly but you said yours are still quite soft after two weeks. Could you post your recipe? I don't really know what to say about the funky smell, it could just be the fragrance oil morphing. That can happen sometimes unfortunately... maybe it wasn't a fragrance oil for use in CP soap?

Also, I totally recommend getting a digital scale. They're way more accurate than the non-digital kinds, you don't have to worry about misreading where the needle is

I've noticed the same thing when I cut apart a bar of dark colored soap. I always figured its because the center has more moisture in it.
N

Tongue testing it will reassure you it's not lye heavy. WIth FO's that brown, it takes some weeks for the bar to brown throughout its thickness because air is not getting to the middle. Now that you've cut these, you will find the surface of the cut will rapidly brown. What you found in the middle is completely normal for discoloring soap.

Color does not tell you if something is lye heavy, but your tongue will!

I am with Newbie on this; the only way to assure yourself it is not lye heavy is tongue (zap) test it. What additives (fragrance, EO, etc) did you use? I made a beer soap for a local brewery and fragranced with a couple of different vanilla scents. It was really cool to cut it and see the dark outside and light inside. Couple of days later the whole bar was dark brown. I like it because this brewery is near a hike and bike trail by a National Forest so a rustic vibe works.

A lot of my soaps get this coloration. The inside will darken and match the outside. Its just some kind of oxidization, tongue testing will reassure that its not lye heavy. But as with most soaping issues its a wait and see thing. time changes a lot of things

The scent may just be fresh soap smell too. Give it some time and see if it doesn't improve
M

Thank you all for your responses. I tongue tested the outer brown part of the soap and no zap. Then, I touched the tip of my tongue to the inner light brown part and got nothing. I put my whole tongue on the light brown part for a few seconds, just to be sure, and felt a little trickle go up my tongue..but nothing bad. This only happened when I left my entire tongue against it for several seconds. But, no zap when gently touching the tip of my tongue to it. What do you think? Is it okay?

Funny enough, just since yesterday.. the inner light brown part has darkened drastically. It is almost all the same color now. Perhaps, I just didn't leave it to cure long enough before cutting it open and what not?

Several of you asked what ingredients I had used. This light on the inside, smelly on the inside thing has happened to two out of 5 of my batches so far. I'll post the recipes below.

Gingerbread (one in pictures above)

At trace, I added Pumpkin Fragrance oil, gingerbread fragrance oil, cinnamon essential oil, clove bud essential oil, teaspoon of cinnamon and 2 tablespoons of canned pumpkin. I poured it into a 3lb mold and a 1lb mold. The 1lb mold gelled and I unmolded and sliced it 24 hours later. The 3lb mold exploded everywhere because I used too many spice oils and then insulated it (didn't know at the time). I ended up putting all the exploded soap mixture into a crock pot and cooking it the next morning. I cooked it for about 1-2 hours and then poured back into the mold (now clean.) Unmolded and sliced it 36 hours later.

The other batch that had this same issue was a Pumpkin Vanilla soap. I can't find where I saved the recipe, but off the top of my head.. I used a combination of cocoa butter, castor oil, shea butter, coconut oil, water, lye, sunflower oil, sweet almond oil and canned pumpkin and vanilla essential oil at trace.

The other soaps I've made are Citrus Coconut Milk Shampoo Bars, Beeswax Honey Soap, Mocha Coffee and Lavender Chamomile. All of those turned out fine. I only made CP and HP soap for the first time 3 weeks a go. Since then, I've loved it so much, I've been making batches 2x a week. Now, I'm out of lye and have to order more from brambleberry. I wish I had a local store who sold it so I could make more now! Brambleberry takes like 2 weeks to ship to me.

Anyway, I am hoping you all have some more insight on why this happened. Could the recipes I'd use have anything to do with it? The Pumpkin Vanilla soap wasn't soft like the gingerbread one. Also, it had a much less amount of lighter color on the inside. The Pumpkin Vanilla soap is a brown color, too, but lighter brown. I think the vanilla EO did that to it. Anyway, thank you all again. I really appreciate all of your answers.
M

Also.. like I had said, since yesterday, the inside of the soap has started to darken more. It's beginning to match the outside. My question is, would it have eventually done this if I hadn't cut it open? Or would it have just stayed light?

They stay light until exposed to the air. This is normal with dark colors.

The color will even out and match the out side

I agree with the others. It just takes time for the color to be uniform as the soap dries and the vanilla darkens the whole soap. As long as it doens't zap you should be fine with a regular cure.
You must log in or register to reply here.
Share:
Facebook Twitter Reddit Pinterest Tumblr WhatsApp Email Link