@Mobjack Bay I ABSOLUTELY believe that you can solve mysteries of soap making, because you believe that you can. If you didn’t, I wouldn’t take you very seriously. But I do!! I’m a plumber. If you ever decide you need plumbing help for soap experimentation, let me know!!

@Mobjack Bay what about marketing specialists, janitors, and (this would be my personal favorite):

As in, real people who wash up my soapy dishes for me.

Ooooh, and a personal shopper to compare prices on the various products, and then order them for me.

But I think I've hijacked this thread, so I apologize... back to the regularly scheduled programming now.

Mobjack Bay said:
access to a good high performance computing cluster and data analysts and modelers on my team.
Click to expand...

Funny, I was just thinking yesterday that I wanted a good ML backed soap [email protected] I'm afraid I'm not one who delights in the details of the specific fatty acids, although I very much appreciate that they exist, and the effort of those who are prepared to untangle the mysteries.

What I want to do is say: I have these base oils available, make me a recipe that maximises (eg) hardness while minimising cleaning and keeping these other values within a specific range. Although the ML example of the computer that was learning to land airplanes keeps coming to mind...

@FragranceGuy Many thanks for your “coming-out”. I can understand you so well! Fully in line with science, your statement poses more question than it answers.
I'll probably miss some points worth discussing about, but I'll try to catch a few of the more relevant ones:

FragranceGuy said:
@Mobjack Bay I’m a plumber. If you ever decide you need plumbing help for soap experimentation, let me know!!
Click to expand...

A good plumber is a treasure

. My dad owned a plumbing and electrical contracting business for 40 yrs.

FragranceGuy said:
I think there’s a lot of room for thinking outside of the box on this. Is it possible that a higher linoleic acid profile can help offset the high stearic, palmitic, lauric and myristic qualities of high coconut oil soaps? I think it’s possible. I think it’s possible that 40% CO soap might be tolerable if balanced with a high linoleic profile, even with a low SF. I don’t know this, but I’m going to try and I PROMISE I’ll be the first to admit if I’m wrong. There’s a certain pleasure involved when admitting when you’re wrong.
Click to expand...

There IS something to what you say, although I do not know specifically what. For the most part, my skin cannot tolerate high CO soaps, BUT I have made some that were okay with a higher CO content than I normally use. I never got around to verifying what specific component was the causal factor, and I may never bother, or I may. Only time will tell. My impression at the time was that in one case it was added eggs in an egg soap. In another case, it was added lanolin that I thought may have played a part, but I didn't pursue further investigation. But all I could really say for sure was that it was formula dependent, in other words, the overall mixture that made the difference.


Tara_H said:
Funny, I was just thinking yesterday that I wanted a good ML backed soap [email protected] I'm afraid I'm not one who delights in the details of the specific fatty acids, although I very much appreciate that they exist, and the effort of those who are prepared to untangle the mysteries.

What I want to do is say: I have these base oils available, make me a recipe that maximises (eg) hardness while minimising cleaning and keeping these other values within a specific range. Although the ML example of the computer that was learning to land airplanes keeps coming to mind...

What is ML?? Machine Learning? Something else?

earlene said:
What is ML?? Machine Learning? Something else?
Click to expand...

Yes, machine learning. In this particular case with the objective of min/maxing particular outcomes without needing to program in all the specific combinations.

Hey fellow soapers, enthusiasts and philosophers! I’m sorry for taking so long to respond. I got my second vaccination yesterday and I’ve been so tired and cloudy headed I couldn’t muster up the energy to appropriately respond.

@ResolvableOwl
Thank you for tolerating and encouraging my rant!

) Both intrigued me deeply to the point that I lost sleep trying to “realize” and make real in my psyche how this makes sense. I spent hundreds and hundreds of hours trying to understand relativity theory. One of my first experiences in a forum was a science forum asking for advice for understanding special relativity. The answers I got were “Nobody can wrap their minds around relativity, but we know it’s true because of it’s predictive capacity. So just accept it.” Okay (enter my skeptic nature) BUT, I desire to understand, I’m going to do everything I possibly can to try to understand, I’m not trying to play God, but I’m not satisfied with being told to give up on understanding. I mean, I learned to sleep on it, but I’m not giving up!” After after about a year and a half of daily thought experiments on special relativity I was finally able to visualize slivers of the relationship between space and time. Small, but satisfying. I realized that special relativity is such a close approximation to measurable reality that it’s ultimately functional in any manner that I could possibly use. It’s closer to the truth than I’ll ever need in human life. General relativity, not so close, but **** functional!!! I was impressed that Einstein also believed that his general theory of relativity was incorrect, rather a close approximation. I have to point out that I don’t believe I’m more intelligent than Einstein. I simply believe that less intelligent people are ALWAYS welcome to question people who are more intelligent. Obsession is where genius lies, not intelligence. I entered the rabbit hole

While my views on the double slit experiment and Laplace’s Demon have evolved over the years, there is a haunting intelligence that seems to hover above us. I think that greatness in any endeavor is often viewed in our culture as something we have to work ourselves UP to, but I truly believe that greatness is something that offers itself down to us. There isn’t any need to build a tower. We don’t need to fight gravity to overcome it. I mean, we don’t need to understand gravity to fall on our bums! (As you comedically pointed out with your 50/50 soap

Your early yet sincere efforts didn’t save you from DOS

) But if we understand gravity, we might be able to use it to make better soap

or at least makes some aspect of our lives better. Thanks for that

Thank you my philosophical friend

@Mobjack Bay
I’m so glad to hear your father was a tradesman!! I bet he was a science minded person like yourself. What line of science are you most interested/working with?

@earlene
With your soap making experience, what drives you to tweak a recipe or keep it? Have you ever made a soap batch that truly surprised you how good it was and why do you think it was so good?

Add your own ingredients and see what values the calculator spits out and tweak from there..
Last edited: Apr 23, 2021

@FragranceGuy I really shouldn’t call myself a scientist these days because I’ve been an administrator for over a decade. I‘m trained in oceanography and marine ecology, but call myself an estuarine ecologist because most of my research focused on Chesapeake Bay.

The punishment for linoleic hubris is – DOS!!! 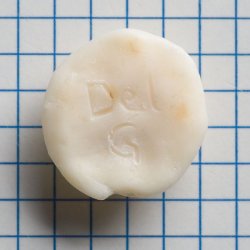 Actually, I'm impressed how long this tiny soap survived, until rancidity caught up with it. I made it back in February, from pure cottonseed oil (ca. 53% linoleic acid), with zero DOS countermeasures. Just oil, lye, water. I had aimed for 5% SF as good as one can for a 15 g CPOP microbatch with a scale of 0.1 g resolution.
Last time I had it in hand was probably in August – no yellow spots back then. It doesn't smell bad (doesn't smell characteristic at all), and the spots seem to be shallow. I have no illusions that its days are numbered, but it had gone strong!

I gave it a bathroom sink & lather test, and I can only say I love it

. DOS aside, it has an agreeable feel (pleasantly rubbery, with an elegant slip), readily gives off abundant, dense and fluffy lather, rinses off easily, and leaves the skin with a clean, silky feel.

ResolvableOwl said:
Just now, I have tested a two months old 100% cottonseed oil soap (ca. 80% unsaturated with L:O 3:1) that has hardened up lovely, but once wet, it becomes just as ropy and slimy as a high-oleic castile soap.
Click to expand...

It was this very soap. Turns out, when giving it another half a year of curing, said castile slime effect completely cured out! My conclusion back then is untenable, and I happily revoke it! Somehow, the linoleic acid initially behaves similar to oleic acid (castile slime), but either it gets figured out over time how to evade that slime phase, or it has to do with the above-average content of saturated FAs of cottonseed. Time to compare to HL sunflower soap.


Now I'm torn if I should enjoy using it up (it'll last just a few days), or keep it to watch how it develops further.
B

My 80% RBO soap cures out the same. Slimy and ropy during the first couple of months, then lovely and silky with a 6 month cure. I have used EDTA in all my batches, and it is a couple of years old with no DOS.

Role of Omega-3s in Soap Making