(Leuco-)Indigo and a puzzling Soap Chameleon

As already insinuated, colouring soap with indigo (for the OPW challenge) surprised me quite a bit.

[First off, I'm using not dye- or soap-grade indigo, but the chemically modified (water-soluble) food colouring variant E132 (indigo carmine), and I probably shouldn't (replacements already on the way…). But as far as I understand the redox chemistry of indigo and derivatives, this shouldn't matter too much.]

I had pre-dispersed the indigo into HO sunflower oil, and eyeballed my batter to a deep blue colour – just to find out that the indigo turned into a pale yellowish green after CPOP! 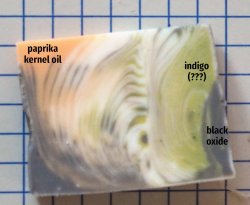 After curing for a day or so, the colour changed back to blue(ish), but with a very disappointing colour depth.
I somewhat accepted my fate. This is the sight that was my original submission photo for the challenge: 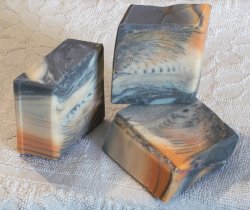 Only today, some eight days after making it, I did a lather test on a small scrap piece – just to witness how soap turns deep blue in my hands! The blue is much stronger beneath the surface! Somehow the colours got muted on the surface (orange and black as well, no soda ash, rather a recipe/oils issue).

Next, I went on, grabbed a planer, and scraped off a few slices off such a scrap bar:

From top to bottom: the subsequent layers planed off (top one is the original surface), thickness each about 1 mm.

Just beneath the surface, the blue was much more intense. But deeper inside, the pale, greenish-yellow colour of the leuco-indigo appears again. However, note that there is a fully bleached rim all around the original outer surface. As of writing, the yellowish core is already turning blue again, once at air contact (like with vat dyeing). So that crazy three-colours-out-of-one-colourant state doesn't hold on for longer than a few minutes.

My conclusion: indigo survives the harsh conditions of saponification best in its (reduced) pale yellow leuco form. Once the lye is eaten up (This was obviously not the case the 11 hours after making when I cut the soap, but (hopefully) is now), the leuco-indigo can be converted back into the blue form by exposure to air/oxygen.


One open question: Which ingredient(s) did reduce the indigo into its leuco form?
My suspects are ROE (of which I added plenty to protect the unreasonable amount of poppy seed oil from rancidity), ascorbic acid (recommended by LyeCalc.com as another antioxidant for the same reason), and aloe vera juice (that I used instead of water).
I would exclude microbial activity (I've seen lactic acid bacteria bleach indigo). As well as sorbitol, though it is a close relative of fructose, and alkaline fructose solution is a popular vet dye reduction bath too. I have no vanilla colour stabiliser in it (sulfur compounds like thiosulfate and dithionite are indigo reducers too).

My instantaneous reaction was to plane my soaps, and gosh! are they blue beneath that crumbly crust! Tomorrow I'll make new photographs and post them into the submission thread.

Have you got discolouration of indigo in one or another form by yourself too?

Indigo turning green is a thing. I've read about variations in colors with indigo based on gel or non-gel, oil colors (very yellow oils turning it green), mixing it into lye solution or not.

I think the ROE could be a part of it, especially if you mixed the ROE in about the same time you added the indigo.

It also depends on what type of indigo powder you have. If you buy it from a soaping supply place, it is "processed" and ready to be used as-is.

My indigo is "unprocessed" because it was purchased for mixing with henna (for hair coloring). If I use it straight in soap, it gives my soap a grassy green color. However, if I "activate" it first (like I have to do before mixing it with henna), it creates grey blue to denim blue in my soap, depending on the amount used, my oil mix, etc.

My indigo powder is "activated" by mixing it with very hot water and a pinch of salt, and letting it sit for 5-10 minutes. I can tell it's ready when the liquid that is separating from the powdered indigo is a very dark blue-black.

Eventually, four types of indigo, two antioxidants, and a 4×4 ice cube mould at hand, it's time to escalate things! 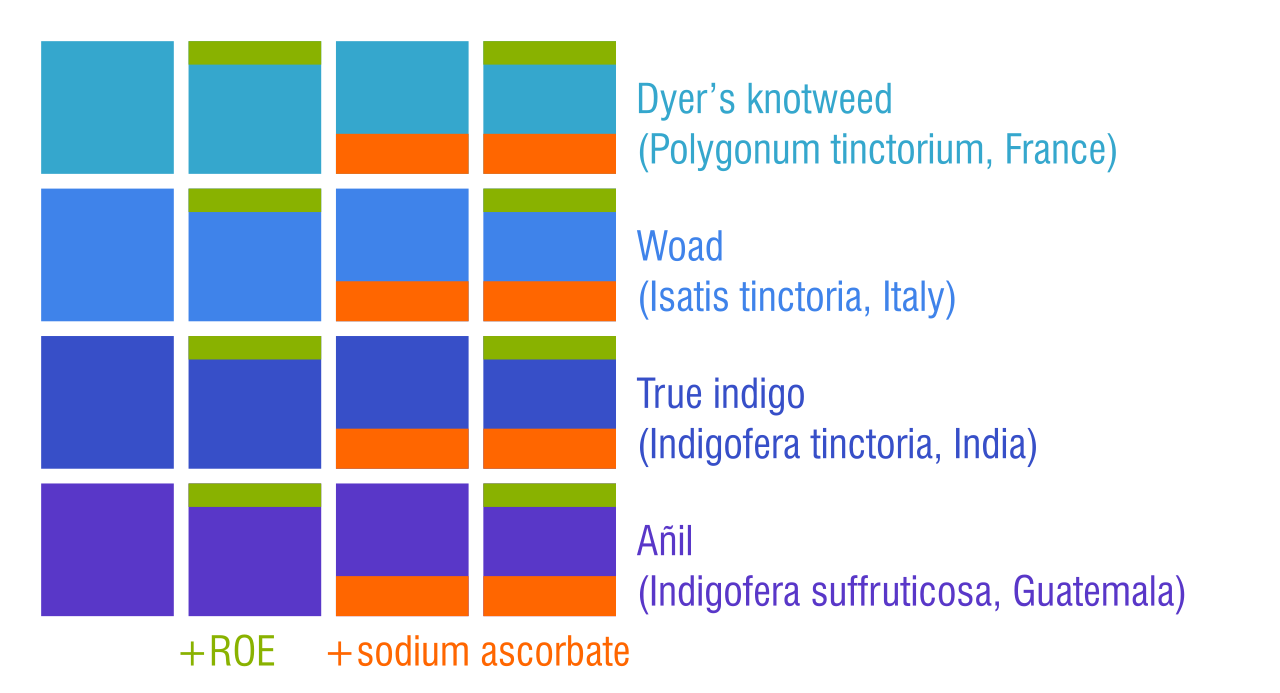 Each series contains 1% TOM indigo extract from these four sources (from a fabric dyer's supply). Workhorse oils are HO sunflower and palm stearin. No further additives. 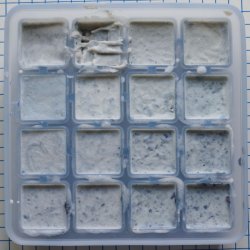 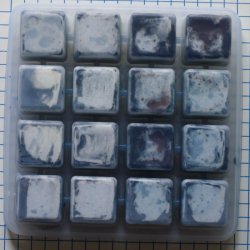 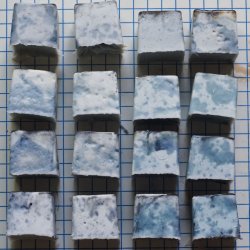 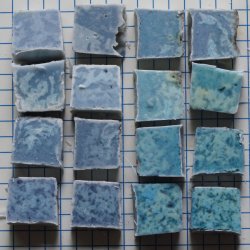 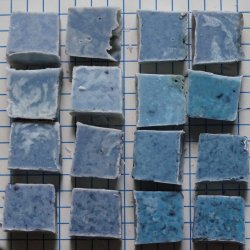 Observations (roughly in chronological order):
Take-home messages and wrap-up:
If I had a 6×4 mould, I'd have included synthetic indigo, and another try with E132. I actually prefer the azure hue of the indigo carmine over the unmistakable denim colour of the unmodified indigos. 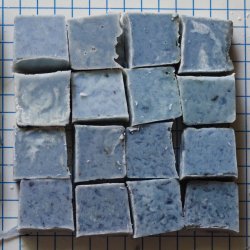 9 days in, the turquoise of the ascorbate-bearing cubes has nearly completely vanished. Unfortunately, the camera still is generous in depicting the “vibrance” and “depth” of this colour, that looks more like a cold grey than a reputable blue to the naked eye.

Sounds like that E132 indigo carmine food colouring was by far not the worst indigo derivative to start with. 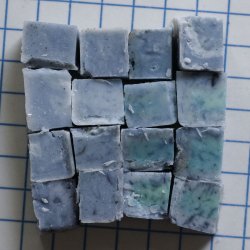 I have cut up the halved cubes into eights, so I have some new cut surfaces freshly exposed to air. Again, the ROE doesn't interfere with colouration in any combination of botanical sources or presence of other antioxidants. Contrary, the ascorbate soaps (right half) have kept some of treir greenish core, that is only fading into the dirty grey-blue from the sides that are open to the air. A bummer that it's apparently impossible to preserve this actually beautiful, more bright and vibrant turquoise against air exposure.
Again, the knotweed indigo (top row) was indifferent to this, and proves to be the most consistent, most boring colouration of all these.

In related news, I have put the remaining 7/8 of the tiny cubes into a confetti soap, which I'll if course show off, once unmoulded, cut and well into curing.

we have at least one variety growing as a weed here, you've got me wondering now if it might be suitable for colouring.

Worth a try in any case, it seems to be not very elaborate (via Still). Since a cheeky knotweed (Fallopia baldschuanica I guess) causes much of the work in my garden anyway, I can give its leaves a try. ETA: Wait, this isn't the Garden-inspired monthly challenge at all.

My Japanese is better than my German, but I'm still very glad for the subtitles! Must watch the rest when I have time to concentrate, thanks for the link! 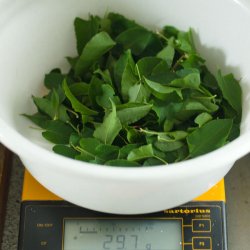 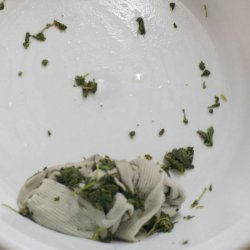 Sure, I didn't mix it quite as thoroughly as the Japanese lady insisted her helpers to do. But if the foliage contained any noteworthy amount of indican, I had expected an eve so slight blue (or at least greenish-yellow) colour to develop … but nope, nothing more than the meager chlorophyll green as I would have expected it from any other green plant; exactly nothing left after rinsing twice with cold water.

A vague memory...
There's a plant used for dye, maybe indigo (?) - I'm sure @Tara_H will know, that requires ammonia to release it's color. In days of yore, they would soak the plant and the article to be dyed in urine. When the article hit the air it turned into the desired color. I feel like there are other plants that require a "pre-treatment" too. Sorry for my Kelly Bundy memory! I wonder if the lady neglected to mention a pre-treat??

I don't know much about the preparation of indigo before the dye vat stage, but I think that the blue colour should be apparent early on.
The step in the process that involved urine would be to change it into its green/yellow form, which will adhere to fibres, unlike the blue form. Once it is soaked in, it's exposed to the air again and turns back to blue...
Now I have this mental image of an ancient Roman getting annoyed that he can't get this nice blue colour to transfer well to his fabric, and peeing on it

Sorry to distract back to the unspectacular (well, kind of, until smell-over-internet is invented) reality: another video from my recent search history. @KimW You're mostly right, as far as I understood it. It's not so much the ammonia itself, but the alkaline and reducing environment in rotting urine that causes the reduction of indigo (from woad or whatever source) to leuco-indigo, as a step in vat dyeing.

ResolvableOwl said:
Sorry to distract back to the unspectacular (well, kind of, until smell-over-internet is invented) reality: another video from my recent search history. @KimW You're mostly right, as far as I understood it. It's not so much the ammonia itself, but the alkaline and reducing environment in rotting urine that causes the reduction of indigo (from woad or whatever source) to leuco-indigo, as a step in vat dyeing.
Click to expand...

As an old roommate used to say, "And there it is."

Tara_H said:
Now I have this mental image of an ancient Roman getting annoyed that he can't get this nice blue colour to transfer well to his fabric, and peeing on it

Peeping should be done a week or two earlier as it is stale urine that develops ammonia necessary for the dyeing process. 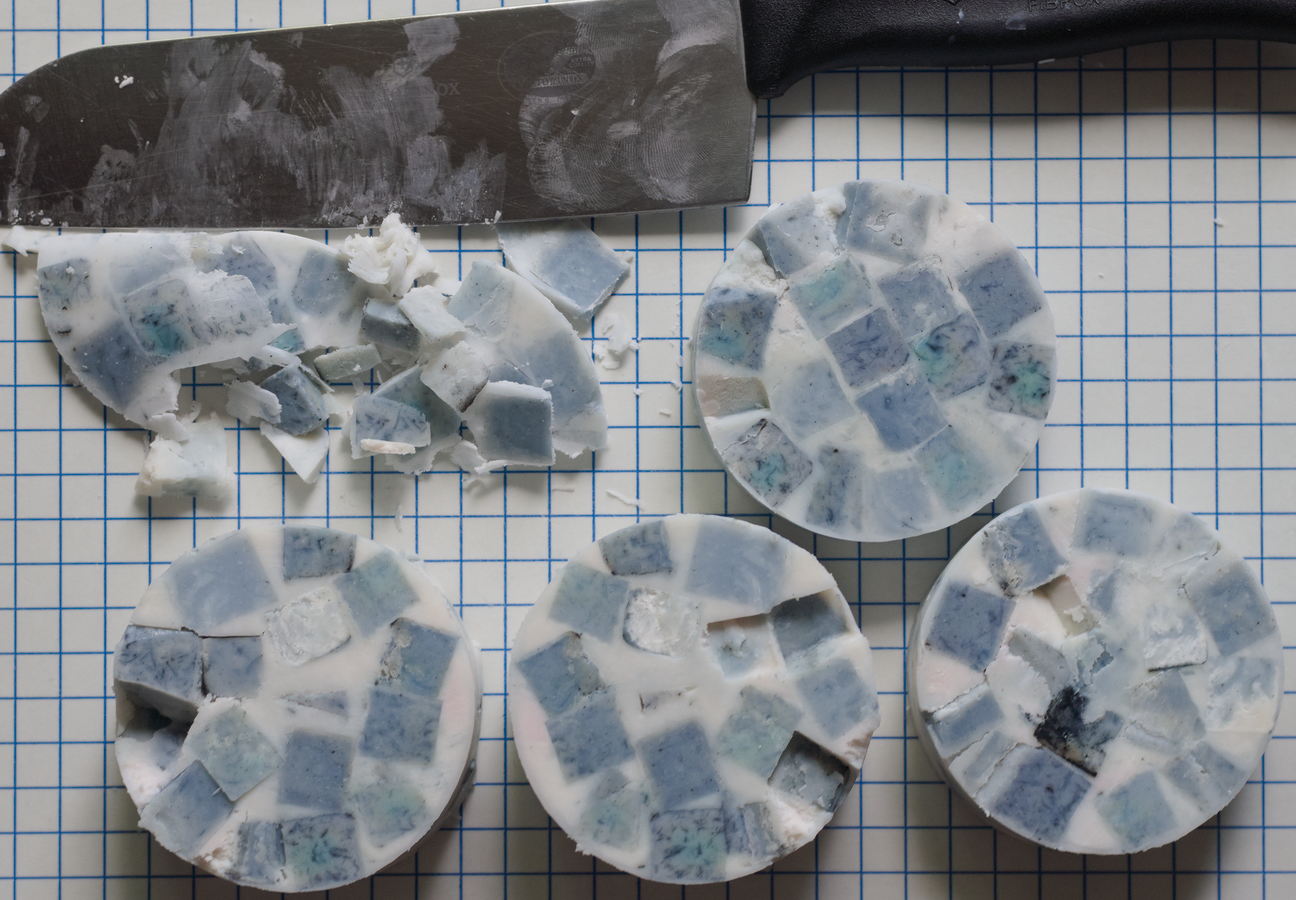 Confetti soap! Well, sort of… looks more like mosaic. And I made things needlessly difficult: by using the nearl four weeks old cubes as-is (not pre-soaked with some water). They didn't overly well stick to the new batter; a few even broke off and left those ugly tooth gaps behind… I ended up kneading all the loose bits into a soap dough like cement, and filled the holes with it.

Confetti soap! Well, sort of… looks more like mosaic. And I made things needlessly difficult: by using the nearl four weeks old cubes as-is (not pre-soaked with some water). They didn't overly well stick to the new batter; a few even broke off and left those ugly tooth gaps behind… I ended up kneading all the loose bits into a soap dough like cement, and filled the holes with it.
Click to expand...

Originally I had planned to do it in a rectangular mould, but I'm glad I decided for the cylindrical mould in the end – so much more randomness going on! I too like how it came out. Even with the not overly convincing colour depth of the indigo … Definitely worth keeping an eye at – good to know to have an excuse for excessive test series!

I'm actually wondering what @Vicki C is making with all her gorgeous colour samples?

For future reference: This is at a ratio of 175:100 of soap inlays:fresh batter, which is arguably too much. With a ratio of, say, 150:100, there would be some more space between the cubes, keeping the whole bar together more strongly.

The mosaic effect is great!