This week I was using a soap at my kitchen sink that's been curing at least 8 weeks (40% lard, 22% coconut oil, 15% olive, 10% sunflower, 6% castor & the rest RBO) and it's very soft and mushy after a few uses. I have been troubled by this, but then I read today Newbie saying too much TD will do this.

The TD I used was Oil Soluble from WSP. I have had issues with brittle soap using Water Soluble TD, but didn't really think about OSTD having issues. I may have used too much since this was a very white soap and I know I used a good amount. The most I would have used would have been 2 tsp PPO, but this is not straight, the 2 tsp would have been mixed in OO. It's a mixture of 2 parts TD and 3 Parts OO, so it would be less than 1 tsp PPO. Would this cause the softness/mushiness I'm experiencing? Thanks for your input.

I've used up to 2 tsp PPO and it doesn't make my soap soft. I would guess it has more to do with the soap dish you are using. Does it have a solid bottom? CP needs to be on a ventilated dish so it can dry thoroughly between uses.
J

That recipe should've produced a fairly hard bar, and at 8 weeks shouldn't be mushy..Im wondering did you use OO out of your recipe to mix the TD in, or use extra?

jstar - No, the OO in the TD was not from my recipe. I now wonder if the extra OO could have caused that. Hmmm. Something to think about.

I do believe I know just which bar you are talking about and I was not going to say a word. I always mix my oil td with glycerin. I am thinking maybe the extra olive oil contributed to it. RBO also has similiar properties to OO. I have never had td cause softness and I tend to use quite a bit at times, when I want really white swirls

Yup, bet that extra OO has something to do with it, that and the RBO at like what..7% is what I figured

cmzaha - Yes, it's the one you used when you were over. :roll: You could have said something, I would not care one bit. I put it out the night before and washed my hands with it about 5 times the day you used it. I think that did not help, but I have not had that problem before so I was perplexed. My hubby is using one in the shower with no issues, but it dries completely between uses so I think this helps.

I will try glycerin and TD together and see if this helps. I think it may have been the extra OO since the black part of the soap seems to be holding up better. Thanks!

Jstar - Thanks for your input!
J

Cmzaha - How do you mix your glycerin with TD? I have oil soluble TD from WSP. I also have their water soluble and one from BB that is supposed to be both.

I'm mixing the td with the glycerin with a spoon and I still see tiny lumps. Do you use a stick blender? I hate TD specks with a passion!
N

Did I say too much TD will give a smushy bar??? The constant use would not allow the bar to dry properly between uses and that will cause it. I usually attribute smushiness to wetness.
J

Newbie - Now I'm re-reading the thread on glycerin rivers/stearic streaking and NO, you did not say that. I must have been drunk or something when I read it.

It was DeeAnna that said:

"Probably the worst name of the two is "glycerin rivers" because it is so incorrect. A high concentration of glycerin would make soap soft and goopy, and the soap should wear away more quickly in those areas due to the softness and water solubility of the glycerin. Ask yourself -- have you ever seen a "glycerin river" that behaved like that??? "Stearic streaks" or spots can be formed by non-stearic soaps as well as stearic soap, but that term is closer to reality."

I have no idea how I read this as TD, but I did. Sorry to misquote you!

Even though I completely misread that thread, I'm realizing my soap was probably soft from too much added oil, or at least i think that was it. I will test it again to make sure so It does not happen again.
N

That's hilarious!! I have no idea how you got to TD out of that. Man, someone should cut you off.

no way would I say something. I use the little frother mixer. (Badger paint mini paint mixer). If I get ambitious and make up a large batch I use a hand mixer with the whip attachment. (quite messy) . I am not saying you will not get some lumps but if I mix it and let it sit a couple of days stirring periodically I do not get anywhere near the td specks I get when using oil. Actually I use glycerin for all my colorants, it is such a great solvent, and has never caused a problem with my soap. You certainly would not want to use large amounts of glycerin since it does act as a solvent.
J

Well, now I need a Badger pain mini mixer too since both of you ladies have one! I have a Norpro Cordless mini mixer and I use the whisk attachment.

I must say, my TD in oil is perfect. It blends into my batter effortlessly and I don't even need to stick blend to mix it in..and I get no specks from it. If it were not for the soft soap situation, I would not rethink it. I may just take out a tsp or two of oil from my batter if I'm going to be using it. It involves warming my oil, using a strainer, stick blending and then putting it in my food processor. No specks and it's a joy to work with, but a pain to make. I make a bunch at once.

I tried the td in glycerin today and did not like it. I had to stick blend it twice, once in just the oil and then again in the batter. I will see if it specks, but I only just mixed it today with my stick blender so maybe it needs to sit for a few days while I stir it some more.

If you have trouble with making your own TD mix. Soap Supplies.net sells it pre mixed. I purchased some once and it works great. I have since premixed my own but if anyone is interested.
J

Thanks Shunt! It's good to know, plus I see that she has a lovely plum mica I would love to try. I have been trying to make plum forever, at least one that I'm happy with.

I don't know how to attach a pic, but there is a great plum colored soap I'm loving. Isn't it pretty? 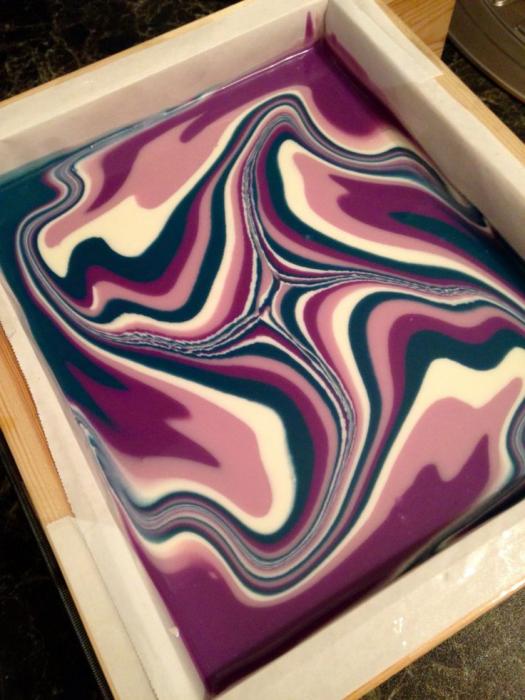 Gorgeous, J! I love the colors and the dotted dividing lines ..
N

That's Sonya's soap! You have your source close at hand.
N

Jen, I have a bit of that plum mica from ss.net. It is pretty nice. I don't have much, but you're welcome to a bit of my bit, I will bring it next time I see you.
You must log in or register to reply here.
Share:
Facebook Twitter Reddit Pinterest Tumblr WhatsApp Email Link