I had read about folks using pringles tubes as a mould, but there was a spilt between those who line it and those who don't. I'm guessing if you don't eat pringles often, then you'd want it to be reusable, so you'd want to line it somehow.

We eat pringles often enough that I've been able to collect a few empties, and I don't make loads of soap, so I'm not concerned about reusing them.

They are difficult to recycle here in the UK, and I don't think it's possible at all in some places, so being able to use them for something else before putting them in the bin feels good.

For this batch, I simply rinsed the tube well after shaking out all crumbs. I left it to dry for a day or two, then poured in the batter at a fairly thin trace. Once it was firm, I cut into the first part of the tube, then continued to open it up by tearing in a spiral around and down. The soap came out really easily, as the tube is lined with plastic, including the metal base.

Each tube will hold a little over a litre to the brim, but I suggest leaving enough empty at the top to get the spiral tear started. As you can see my recipe only filled about half the tube as it's a test batch, but if your recipe is larger, just pour until about an inch or two from the top, then put the rest into other moulds.

I've attached photos of part way through the peeling process and afterwards. 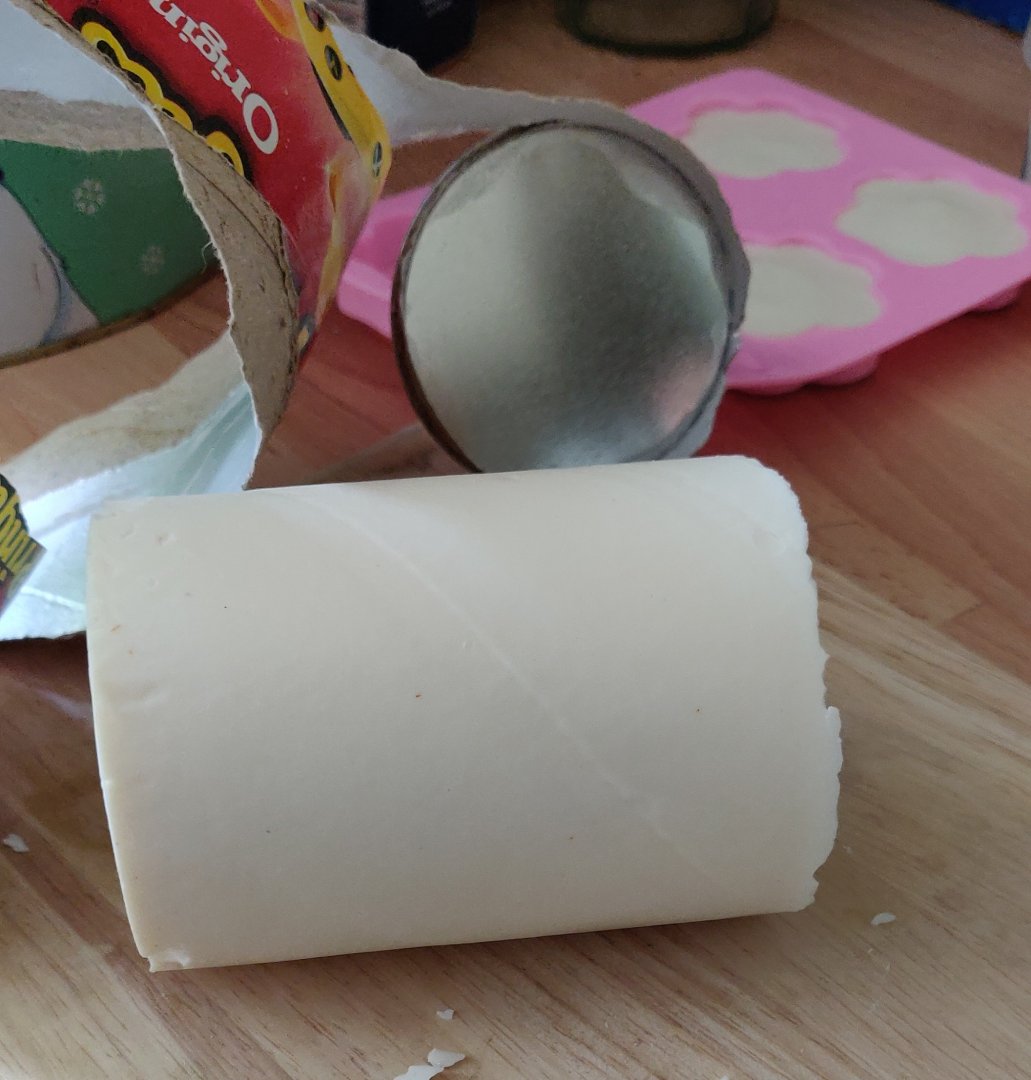 Babyshoes said:
We eat pringles often enough that I've been able to collect a few empties, and I don't make loads of soap, so I'm not concerned about reusing them.
Click to expand...

I used them in the very same way. One served me well for my HP/rebatch/confetti ball embed log, except that I had stuck two stripes of bubblewrap foil along the inside, to have that iconic beehive texture along the outside. The spiral unwrap was a lifesaver, I wouldn't have got them out in any other way.

After cutting, my soaps didn't come out very circular. The batter was still softer than some of the embeds after a few days, so internal strains deformed them a bit. Unfortunately, that's an issue that everyone who uses cylindrical moulds is facing to some degree. Rectangular logs are more forgiving against shear forces while cutting.

I am of the line-them group. I don't like the product that comes in the can, so don't want to buy anymore. Also, I am not comfortable allowing raw soap to come in direct contact with the (what looks like to me) inner metallic lining inside the can. It may or may not not be safe for lye-contact, but either way, the possibility of remaining foodstuff debris or oils in the can puts me off leaving the can unlined. Actually I do not make round soaps very often either.

I had no difficulty getting the soap out. I cut the bottom off and used a tight-fitting plastic lid from a small peanut butter jar as the bottom, which I wrapped with freezer paper before wedging it in place. IT wedges in there really tightly, and there is absolutely no soap batter leakage from the bottom. Once the soap is solid, you can make it easier to remove by placing in the freezer for a bit (15-30 minutes should do it), but this is not really necessary. Removing the bottom plastic lid from the peanut butter jar & the top plastic cover (from the original Pringles can) leaves openings on both ends. The soap surrounded by freezer paper slides right out fairly easily one you get it started, either by hand if you hand is small enough or with another implement to start pushing it through.

Soda Ash and when to plane?