I'm pretty happy with my first soap! I'm glad I waited to do my second batch till I tried this though, because now I have a few questions about my recipe.

I let the soap cure just a couple of days shy of 6 weeks before trying it. What I'm happy with: the hardness of the bar! It seems considerably harder than store bought and I think that means it will have lasting power. I felt squeaky clean after using it, but not uncomfortably so--so I think its a nice combination of cleansing/conditioning (I'm sure more use over time will tell me that).

What I would like to change/improve: I'd like more lather and bubbles. This soap had a more creamy lather, with few bubbles. I would love more bubbles! I don't think I'm ready to try a salt bar yet...is there any way to achieve this in a simple recipe?

Also--the bar smells good, but the scent is kind of lost in the shower. I'm not hoping for a scent to stay on my skin, but it would be nice to smell it while showering. Is that as simple as adding more FO?

Thanks for any and all advice!! I'll try to attach my recipe... 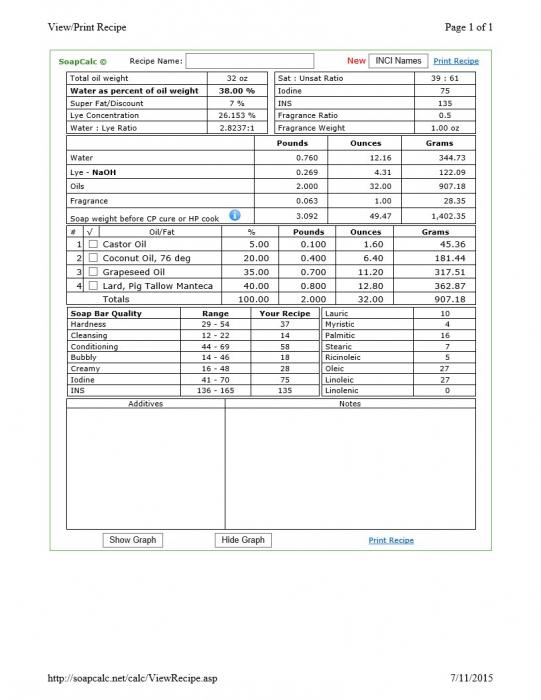 The only thing I would do on your recipe is omit the grapeseed oil, I have never used it b/c I read early on that it is likely to increase the chances of DOS b/c it has a short shelf life. I would sub in either olive, or increase the lard some and then add the rest in olive.

If anything, adding lard will make the soap harder, since grapeseed is a soft oil, and I think lard makes nice lather. And is generally the perfect soaping oil.

To maximize lather I would up the percentage of castor a little, it does speed trace a little, but I typically use b/w 7-8% with no problems. I know others go higher than that depending on the mix, but I might save that for later batches, as it will create a softer/more jelly-like soap unless the mix is right.

Re more bubbles, I'm sure you've seen this, adding sugar is what most people do. B/w 1 tspn to 1 TB ppo, I add 1 TB in a pre-mixed 50/50 sugar-distilled water solution for ease of use, so something in between.

Re the FO's, you should be getting *some* kind of scent in the shower, even at .5 oz ppo. That would be low for me, but it is plenty high for lots of people, so it just rests on how strong you like the scent.

Much of this depends on how well the oil itself sticks, IMO, many of them do not. The only way to know that in advance is to try to research reviews. There is an excel chart here - it is a sticky on the FO forum - where people have posted their thoughts on various ones, plus a forum called the Soap Scent Review Board which is pretty much all about that. Be warned though, sometimes folks have trouble signing up for that, you need to be patient.

Or you could just post here to see if someone knows about one, or post your favored scent families - eg, floral, green, citrus, water, etc, etc - and see what people suggest. For me that would be the best way, since many of us already categorize our millions of FOs in that way and it sort of gives you a good list of things to look at that you already know should behave and stick well.
Last edited: Aug 22, 2015
S

Congratulations on the soap! I think you have a great start to soaping there!

The first thing you need to know is that soap is a wash off product. The scent will fade in about 5 minutes after you leave the shower. If you must have scent on your skin, what about making some body butter or lotion with a matching scent to apply after the shower? Body butter is super easy and will really help if you get dry skin.

You can increase bubbles by adding 1 tsp sugar PPO. Just be careful to watch for overheating after you pour.

ETA-Sorry, apparently I was typing the same time as not_ally.

Also keep in mind that most CP will simply not have the big bubbles of the commercial soap you are used to using. You can make a 100% coconut oil soap with a 20% superfat that will give lots of bubbles but melts away pretty quickly in the shower.

Using a shower poof will also help with the lather.

+1 for adding sugar to the water before the lye, and replacing the grapeseed oil. If it were me I would ditch that grapeseed to more lard and sub in some almond or olive oil.

Is your water hard? If so you can increase your lather by adding citric acid or sodium citrate to the water before the lye. If you use citric acid you need to add a bit more lye so you don't up the superfat - search thread titles for "citric acid" to find the calculations.
O

Agree with all of the grapeseed oiladvice, if you need to use up a bottle you can add grapeseed at up to 10% without any DOS (at least that has been my experience). Look at the Iodine level and under 70 you should be fine at that %. I love to subtract from the coconut oil and add a little PKO but that is something you will most likely have to order online. I like to add goat milk or beer to some recipes to increase the bubbles, just a few ounces added at trace will add to the bubbles, just subtract from the water.

Yep, I'm with the others. We've been talking lately about a classic recipe that's 75% to 80% lard, 5% castor, and the balance coconut oil. With a little sugar, it lathers beautifully and makes a long lasting bar.

I am amazed and in awe about your ability to delay gratification! You are a woman of great determination and willpower.

Soapsupplies.net has a great Black Raspberry Vanilla that soaps beautifully, no acceleration or discoloration, and it will cling for a little while after rinsing it off. I use almost all fo's at at rate of 6% of batch oils. I personally do not like over 20% olive, it feels sticky to me even with a long cure time. You could replace some of the grapeseed oil with 15-20% canola oil. I happen to prefer Rice Bran Oil for some or all replacement of Olive Oil, only drawback is the color of rbo, it does not cure as white as OO. If you have access to a Walmart this is a great shortening to use with or without lard. I actually like the combination of lard and tallow which will add some bubbles. Tallow has a higher cleansing factor than lard, so it will contribute to bubbly. http://www.walmart.com/ip/Great-Value-Shortening-42-oz/10451501


OliveOil2 said:
Agree with all of the grapeseed oiladvice, if you need to use up a bottle you can add grapeseed at up to 10% without any DOS (at least that has been my experience). Look at the Iodine level and under 70 you should be fine at that %. I love to subtract from the coconut oil and add a little PKO but that is something you will most likely have to order online. I like to add goat milk or beer to some recipes to increase the bubbles, just a few ounces added at trace will add to the bubbles, just subtract from the water.
Click to expand...

I would really not recommend beer to a new soaper to soap with since it can be tricky and dangerous, or goat's milk since the extra fat can deter bubbles. Sugar will contribute as much to bubbles as beer and is much safer to use. Just make sure you dissolve the sugar completely before adding lye to the water, or easier yet is to make a simple syrup. In a recent swap we discovered aloe juice seemed to contribute to lather
M

DeeAnna said:
Yep, I'm with the others. We've been talking lately about a classic recipe that's 75% to 80% lard, 5% castor, and the balance coconut oil. With a little sugar, it lathers beautifully and makes a long lasting bar.

I am amazed and in awe about your ability to delay gratification! You are a woman of great determination and willpower.
Click to expand...

Lol! It was hard. I checked on my soap almost daily. I thought about singing it lullabies.

I'm very intrigued by the "classic" soap idea. Now that my first batch wasn't a failure, I hope to start making some more frequently. I'll add that idea high in the list!

Opinions on this updated recipe? 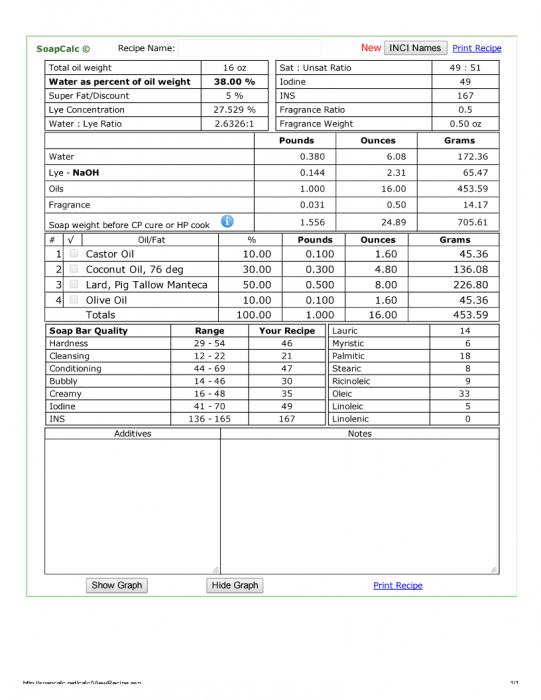 I'd drop the coconut down to 15-20% and make up the difference in olive oil.

As a certified bubble-lover (like yourself, from the sound of it ), this is how I'd tweak things:

And I would add 2 tbsp. sugar ppo (that's the normal amount that I use in all my batches, except for my 100 CO batches for obvious reasons). For what it's worth, I've never had any issues with sugar causing my soap to overheat. I've had honey overheat on me in the past before I started mixing it in my lye water, but for whatever reason, I've never had that issue when using white granulated sugar.

Thanks! I also have sunflower oil...not sure how it compares to grapeseed in cp...

If it's high oleic sunflower, it is closely comparable to olive oil. Look at the bottle -- if the oleic acid is in the 70% to 80% range (speaking from memory), the oil is HO. It may also be labeled "high temperature" or "suitable for frying/sauteing."

If it's regular (high linoleic) sunflower, it is going to have linoleic in the 60% to 70% range with oleic being much lower. That's pretty close to grapeseed.
Last edited: Aug 23, 2015
S