I’ve been resisting adding alkanet to my colorant options, mostly because I can’t bear the idea of yet another learning curve right now. Results with alkanet seem so variable. Given that I feel reasonably comfortable with madder and indigo, and have had the colors hold up for at least 5-6 months, I thought I would try mixing them to get purple. It can be done!

For the madder, I first extracted the dye by soaking madder powder in a 50:50 mix of alcohol (91% isopropyl) and distilled water. I added white kaolin clay to the liquid only (no powder) until I had a very thin slurry and then let it sit uncovered until the volume was reduced by about half (thick slurry).

For the indigo, I used a combination of liquids from 1) a jar of pre-reduced indigo crystals (manufactured indigo) dissolved in household ammonia and 2) a jar of indigo powder in 91% isopropyl. For the latter, I shook the jar to suspend the powder before I used the liquid. Other than the scent of ammonia, no noxious fumes were detected when I mixed the liquids... I then added the clay and proceeded as above. The only reason I can give for mixing the two indigos is artistic license at the time I was mixing colors

Soy wax recipe - tiger stripe (please use your imagination) scented with BB Lavender Cedar FO and hanger swirl scented with BB Lavender FO. My starting lye concentration was 35% and SF=2% without correction for lye purity. Based on the intensity of the color in the slurry and the thickness of the darkest batter for the first soap, I thinned the slurry down with a little water for the second soap. That resulted in a lightening of the darkest color in the hanger swirl soap, where I really can’t pick out three distinct colors. For comparison purposes, I saved a little bit of each slurry on a paper towel. As you can see, this is not “what you see is what you get”. The dried clay slurry for what turned into pink soap stills looks lavender, which is how it looked when I added it to the batter. The white soap is natural/uncolored. The molds went into a box that was covered with a towel and set on a heating pad @ low for two hours. 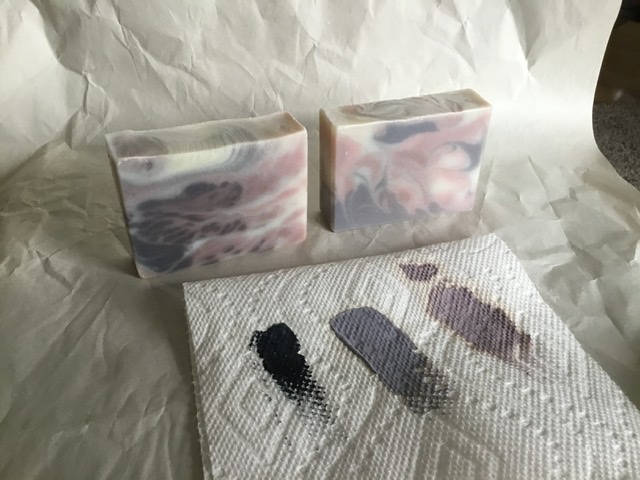 Tallow lard recipe - cubes (ungelled), layered and funnel pour of layered batter that I swirled, all scented with BB Lavender mixed with BB Juniper and Sage (mild acceleration). My starting lye concentration was 33% and SF=2% without correction for lye purity. I used the same slurries used for the previous soaps, but aimed for darker colors. My notes indicate that I also mixed up some AC in oil, but they’re not clear as to whether or not I actually used it. There’s also nothing in my notes about adding anything to the white/uncolored batter. Based on the weird chalky looking white in the swirled soap I thought that maybe I had added white clay, but there’s nothing in my planning notes about mixing white clay . I split the batter at emulsion, made the swirled soap first, and then SB’d to medium trace for the layered soap and the soap that went into the cubes. For the layered soap, I attempted to swirl some colored batter into the white for the top layer, but it looks more like I plopped than swirled. The small loaf and t/s molds went into a box in a pre-warmed oven (turned off). The cubes are leftover batter that was left on the counter to do it’s thing.

I am super happy with the range of colors produced in these soaps. It’s a little hard to see in the photo below, but the layered soap has a nice maroon shade in the middle and the bottom layer is a deep purple. I’m not convinced that I’m seeing the maroon in the swirled soap. For my next step with these two colorants I’m thinking about trying a high water:low water soap with a single colorant blend. If I keep the temperature of the molded soap just right, I should be able to get the HW side to gel without gelling the LW side. 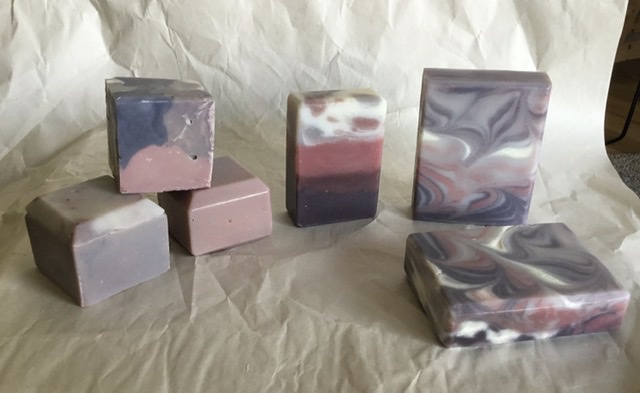 At this point, I have no explanation for what happened with the uncolored/white batter in the swirled soap. It looks about the same color as the white in the layered soap, but the texture is very different. It’s a bit brittle and also seems a bit crystalline, doesn’t zap and looks “collapsed” in one of the swirls, which I think is ultra weird. It also seems to be concentrated in a center core of soap wherever it appears (see photos below). I have a very vague recollection of scraping some of the uncolored batter from the wall of the pitcher back into the pitcher and thinking at the time that it seemed to have thickened up a bit relative to the nice thin batter in the pitcher. Could it be that stearic and palmitic crystals formed preferentially in cooled off, slightly thickened bits of batter that I mixed back into warmer, more fluid batter? 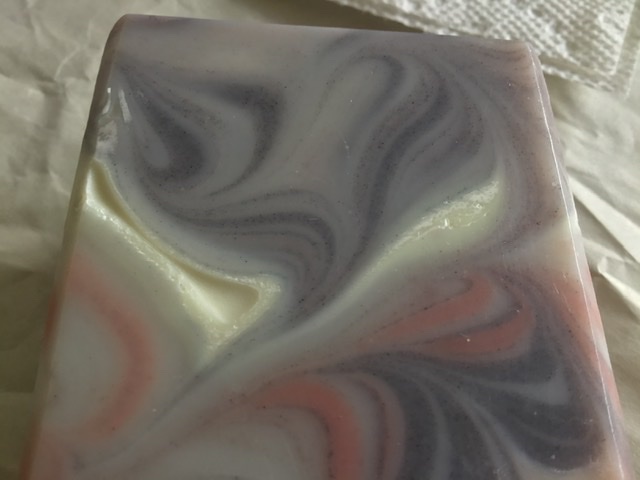 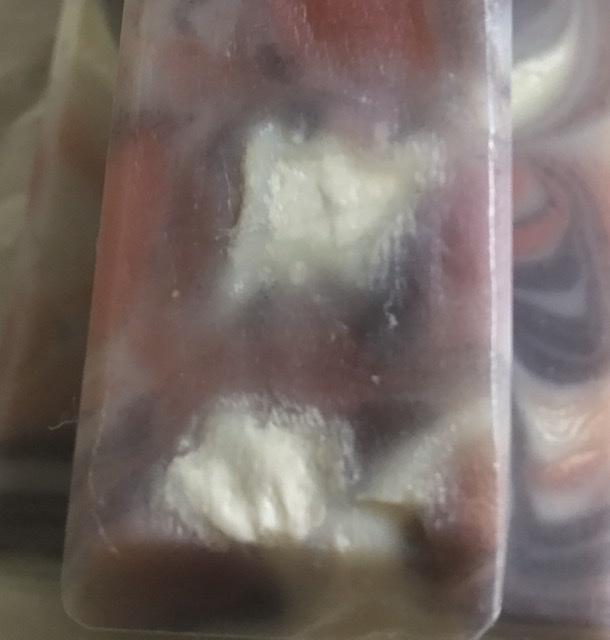 This is awesome!! I haven't dared try mixing natural colorants into other colors, bur your results show it's possible. I'm in love with the maroon color you got in that layered soap, it's marvelous and I never thought that shade would be possible with natural colors

szaza said:
This is awesome!! I haven't dared try mixing natural colorants into other colors, bur your results show it's possible. I'm in love with the maroon color you got in that layered soap, it's marvelous and I never thought that shade would be possible with natural colors

I will take a better photo of the layered soap tomorrow. The colors are great.

Impressive - all of it

The light is not quite the same today and this photo seems a bit darker my eye (and it also looks more purple to me than it does on my iPad screen). The one on the right is the back of one of the swirled soap. There’s quite a range of colors in there. It’s interesting to me that some of the palest rose color in the soap looks more like the color in the ungelled cube soap above and then it’s grading into what looks like the colors of the gelled soap to the left. 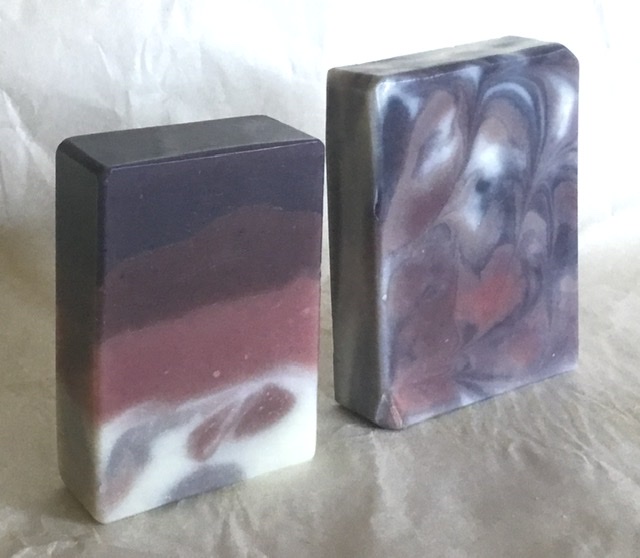 A comparison of botanical, clay, ultramarine and oxide colorants