I think I have success!!

I am new to making shave soap. I'm learning and trying new formulas and just made an 8oz test today. I used coconut, stearic, kokum & shea. My fatty profile is:

Is this an acceptable fatty acid profile for shaving soap? I'll test tomorrow but just from cleaning my pots it seems pretty good. It does have some bubbles which I haven't had in any of my other tests but I haven't gotten the lofty lather in those either. Thanks for your help.

A better indicator will be the full recipe, including type(s) of lye used - I never look at the fatty acid profile of my shaving soaps!

That's interesting. I'm part of a soaping group and that's all they talk about is the fatty acid profile. This is recipe:

This isn't Facebook, though, and most people here talk about oils and such as unless you are only using the fatty acids, your recipe is MORE than just those fatty acids. For example, CO is a mix of all but two of the acids listed on soapcalc, but I think if you made a soap of those fatty acids in those ratios but also another batch with CO, they would be different even though the profile would be identical. The actually ingredients have a bearing on the end result.

As for your recipe, did you HP it? I don't like saponifying butters, as they can interfere with lather - especially at 30% or more, but at 20% I don't know, as this is a shaving soap and lather is actually the point of it. I once made a 75% SA and 25% CO and it just really didn't get enough "ooompf" to actually make a lather. It was creamy and stable in those regards, but couldn't build any body to the lather at all.

It might well all work out for you, but I can't say that it looks super. I hope I am wrong!

Where are you getting the base information for this recipes from? Especially as you say you are struggling with it.

I'm with TEG. I would up your CO and drop your butters to 10% or less. I use 5% and find it conditioning with excelled lather. There is a whole post here on shaving soap with a whole lot of useful information

I think the types of oils/fats that are used, as well as the fatty acid profile, go hand in hand. I believe it's really beneficial to look at both.

With the caveat that there's no such thing as a one-size-fits-all profile (so much depends on skin-type, water conditions, lathering technique, etc..), here is the fatty acid profile of my hubby's favorite shave soap that I make for him:

When it came to formulating my shave soap, what I liked to do was lump the Lauric and Myristic together as being one entity, and I also did the same with Palmitic and Stearic. Keeping an eye on those 2 combined sets of fatty acids seemed to make the most difference in formulating my shave soap. For example, going too high with the Lauric/Myristic combo, caused too many of the fluffy kind of bubbles that tend to dissipate quickly (and also contributed to too much dryness). And bringing the Palmitic/Stearic combo up to at least 50% provided enough cushion to my formula that I was able to eliminate clay from my recipe.

As for your % of butters, I'm the odd one out (so far) in that my butter content is 22% of my hubby's favorite formula. lol

Having said all that, though (and just to throw in a curve-ball to dispel any notion that there's a magical fatty acid profile that one should never cross), a kind fellow-soapmaker on the forum sent me one of his croaps for my hubby to test out. It took hubby a few days of adjusting the water level and his lathering technique, but he got it figured it out after the third shave and ended up really enjoying shaving with the rest of that croap (almost to the point that I got a little jealous- lol). I won't give away his recipe, but he used a whopping 50% butters in the croap, and he super-fatted after the cook with 5% more butters. Also- his fatty acid profile was so different from mine that I could hardly believe it.

Moral of the story- take those profile numbers with a grain of salt until you've made a batch and have actually tested it out. And then based on the results you achieve, only use the numbers as a springboard of sorts to tweak your formula more to your liking. It very well may be that the profile you end up liking breaks all the 'rules'.

Yep, what Effy says. I tried pretty much the same thing -- hey if a little stearic is good, so more is better, right? That batch ended up being utterly useless. When I saw the 70% stearic acid content in the OPs recipe, my first thought based on my experience was "this isn't going to lather very well".

Even though the total amount of stearic and palmitic needs to be fairly high for a shave soap, that isn't the whole story of a good shave soap. Modest amounts of the other common soaping fatty acids are also important.

I consider the fats as well as the fatty acid profile when developing a new recipe. IMO, I get a better perspective of the soap formulation by looking at both types of information. Once I get into tweaking a recipe, I might look more at just the fats -- a few % higher for one fat and a few % less for another.

"...what I liked to do was lump the Lauric and Myristic together as being one entity, and I also did the same with Palmitic and Stearic...."

I agree with Irish Lass -- this simplification also seems to work pretty well for me to evaluate my shave soap recipes.
C

Interesting comments. I'm using the hp method. The soap actually lathers pretty well. A shave soap expert advised me to keep lauric & myristic in the 10-15 range and that oleic should be on the low end. He only uses coconut and stearic oils in his recipe and adds glycerin. One of the best shave soaps I've seen. I don't know what his numbers are but stearic must be pretty high if only using those two oils. He also only uses KOH. This is my shave soap. I let the lather sit for over 30 minutes and it was still creamy and lofty. 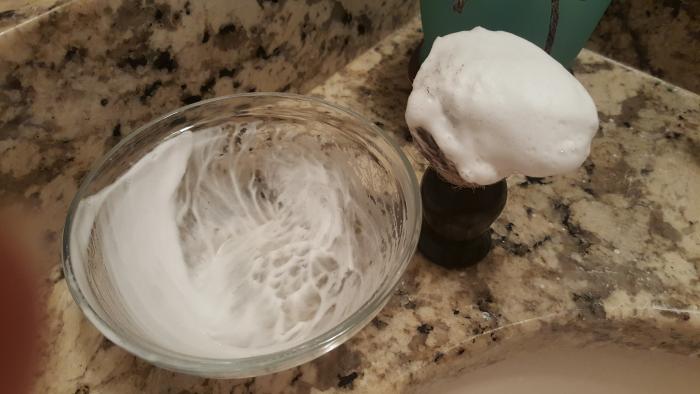