I may have screwed up...

I just tried making 100% coconut oil soap @ 20% SF. Everything went very well--I soaped at 100degF, separated a portion out and added turmeric, tried an in-the-pot swirl. Everything behaved perfectly, thought it did seem to get to a thicker trace than I've worked with yet, faster. i'm not sure how to describe--by the time I poured it in the mold I'd say it was more than medium trace, though that is a newbie's interpretation.

I didn't want to risk overheating and I like the look of a non-gelled bar, so I put the loaf in the freezer. Its been in there under an hour, but the sides and bottom are a little warm to the touch and I swear, I think I see signs of gelling already--just a slightly darker hue under the top. I've only seen a soap gel once, so I'm no expert!

Should I take it out and let it gel? What's the best way to handle a 100% coconut oil loaf? 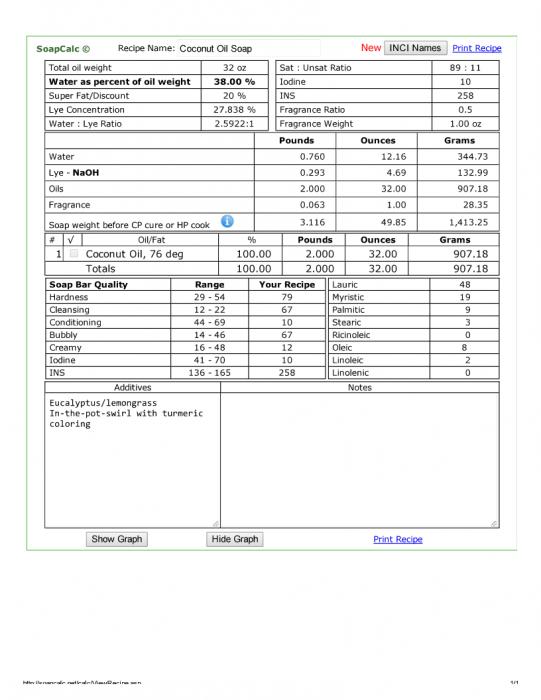 If it started a partial there is not much to be done to change it other than putting it in the oven to force complete gel, which I would not do since partial gel does not affect the quality of soap, it is a cosmetic issue. 100% coconut oil soap will heat faster than other recipes and I find Eucalyptus EO will /can heat up a little more than other eo's.
M

Thanks--I'll leave it alone and cross my fingers. My notes are wrong on that--I'll have to update them. I ended up using lemongrass and cedarwood.

I read that 100% coconut oil soap will need to be unmolded and cut much sooner than say a lard soap. Should I leave it in the freezer for 24 hrs or put it in the fridge after a few hours?

Thanks so much for your help!

I would take it out and let it gel. Better a full gel than a partial gel if you want the coloring to look even.

My 100% coconut oil soaps are quite the little heaters for me. I've never tried to stop them from gelling because 1) I prefer gelled and 2) they gel so hot and so fast that even if I wanted to stop the gel, I've always had the feeling that they would gel no matter what I tried to do to stop it. lol My usual protocol is to just stand back and let it do it's thing, and then unmold and cut as soon as it sets back up from gel....usually within 6 hours after pour (one of the many things I like about this formula).

I use a slab mold when I make 100% CO soap and it still gels, even though I don't cover or wrap it. I would probably try to let it gel at room temp but be very watchful for overheating. If you are concerned about overheating, just leave it in the freezer.
M

Oh geeze, to take it out or leave it in!! I think these are all questions I should've asked BEFORE I made the soap, lol. I don't mind if it gels and don't know enough to worry about overheating. I guess I always worry about overheating, but I don't really have enough experience to have an idea when it might happen.

I am one of the weird that just do not mind the look of partial gels. Gives my customers something to wonder about how I got the neat oval in the middle.

I don't mind partial gel either and sometimes it ends up looking really cool. I made a two tone yellow bar once with irregular layers, it ended up looking like clouds and with partial gel, it looked like a moon behind the clouds. I was disappointed when the gel circle faded with cure.

I'm late to the party, but at 24 hours you would have a very solid loaf for cutting. You'd need to it sooner, keeping an eye on it to see when it is ready
M

So I cut it around 9 hours after I made it. This was an oddly behaving soap! Or maybe it was me--I was a helicopter soap mom. I froze it, I took it out of the freezer, I left it alone, I tucked towels around it. It started to gel, it cooled, it started again, it *almost* gelled, but doesn't have a "partial gel" center. And to top it off, I hate the smell. I used cedarwood and lemongrass, but way too much cedarwood.

Overall I'm happy. I tried an in the pot swirl. I colored with turmeric and was hoping for a brighter color, but I think it looks nice and peachy and subtle. I really like the crisp white of the base color.

I think it came out v. nicely. I found the numbers interesting on this, for some reason I did not know/remember that CO had that much lauric acid in it. I am curious to see what your friend thinks of it, since it is essentially a salt soap recipe w/o salt!

I do think it points to the flaws in soapcalc, though, I would expect the conditioning number to be higher given your SF %, also the INS no. is so wacky, and so many newbies use that as the end-all indicator of where a soap will go.
Last edited: Sep 6, 2015

NA, soapcalc doesn't take SF into account when it provides numbers. 0% or 20% Sf will show the exact same numbers.

I really like 100% CO soap but I don't like how quickly it gets used up. Its a very soluble soap and will melt away quickly.

I love the color and the soft swirl...wish I had attained that in my last batch...
As for the scent...it's early yet, wait a month before you say you hate it..


not_ally said:
so many newbies use that as the end-all indicator of where a soap will go.
Click to expand...

Guilty as charged! What else do we have to go on? It is the most frustrating part of soapmaking for me...I create a recipe I think will work and then I plug it into soapcalc and the numbers I see dash all my hopes...
How do we learn to think outside of the soapcalc box?
N

This is kind of frustrating, really. I understand it w/additives, where there are no slots/blanks to add them in, but since there is a space for SF it seems like there should be a way to add the effect into the calculation/numbers. I do not depend heavily, or much at all, on the numbers, but that does seem to be an essential flaw that could be misleading to new soapers.


rparrny said:
It is the most frustrating part of soapmaking for me...I create a recipe I think will work and then I plug it into soapcalc and the numbers I see dash all my hopes...
How do we learn to think outside of the soapcalc box?
Click to expand...

The soap calc numbers are kind of a good general guide for things in some ways. Something that skews things like the OP's 100% CO soap, soap calc has no way to calibrate those factors.

When I started I had already spent hundreds of hours looking at posts. Then started making my own based on what I thought I might like based on them. The big trap that allowed me to avoid was not using fancy/expensive oils where the good things about them would not survive lye in CP.

I was lucky b/c I found a mix of oils (high lard, a bit of coconut, olive, castor) that I loved pretty much immediately - thanks susie and the other lard nuts! - and that worked really well w/my dry skin.

After that, I spent quite a bit of time researching fatty acids in soap and how they worked, which helped me guess less randomly on how changes to my base formula would end up, and problem solve afterwards if there was something that I did not like as well. Like I said, I use pretty basic oils in my soaps, so they stay w/in a basic range on soapcalc.

But if they fall out of the targets I do not worry as much b/c I have sense of what I am trying to do based on the profiles of my oils and the other things I am adding into my soap, many of which soap calc does not evaluate.

I know, this is not v. satisfying. Even to me, as I am typing it out. Ugh, sorry.

rparrny said:
How do we learn to think outside of the soapcalc box?
Click to expand...


If you ask me, there's just no substitute for good old-fashioned trial and error via making lots of experimental batches and curing them. lol That might sound a bit tongue-in-cheek, but it's very true. That's how a good handful of supposedly 'set-in-stone' soaping myths/theories that permeate certain books as well as blogs roaming about the net have been busted/disproven.

All the numbers on SoapCalc, including INS, should be taken with a grain of salt. I use SoapCalc as a plumb line based on soaps I've already made and cured, but I discovered early on that they can only be used as general guidelines at best, as opposed to being used as absolutes, for there are always that handful of baffling recipes that totally defy the numbers. :twisted:

Here's an oldie but a goodie in regard to INS from DeeAnna:
http://www.soapmakingforum.com/showpost.php?p=449650&postcount=2

Edited to add: .....studying properties of the different fatty acids helps, too, as not_ally pointed out.
Last edited: Sep 6, 2015

IrishLass said:
Here's an oldie but a goodie in regard to INS from DeeAnna:
http://www.soapmakingforum.com/showpost.php?p=449650&postcount=2

Edited to add: .....studying properties of the different fatty acids helps, too, as not_ally pointed out.
Click to expand...

Wow, I just read the post and...wow. Deeann has a gift for teaching that's for sure. What a great post, thank you for leading me to it.
I have been reading about the different properties of fats and oils and I find it fascinating. I think there's something very wrong with me...:shifty:
M

rparrny said:
Guilty as charged! What else do we have to go on? It is the most frustrating part of soapmaking for me...I create a recipe I think will work and then I plug it into soapcalc and the numbers I see dash all my hopes...
How do we learn to think outside of the soapcalc box?
Click to expand...

This describes me as well! I don't know enough to know what I don't know. Every batch introduces new questions.

Thanks to you experienced soapers for sharing so much information. Now I'm off to research fatty acids.......
S

Methodical trial and error experimentation with good notes teaches you to think outside the SoapCalc numbers box. You need to know the properties of those oils and fats, but that knowledge only goes so far until you make enough batches to be able to read a recipe and know how it will feel. When you have questions based on your experimentation, though, that is when you ask and get the very best comprehension.

I also think a great learning tool is the history here on the forum. Reading about suggested recipes and the feed back and the results gave me a solid foundation in oils and recipe formulation.
A