I finally have room for a veggie garden!

Hopefully, this will be successful: 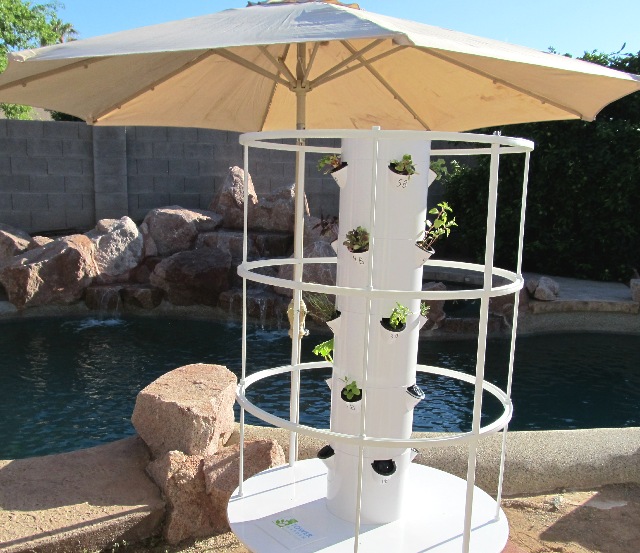 It's called the "Tower Garden". If any of y'all have been through a ride called 'The Land" at Disneyworld's Epcot Center in Florida which portrays different ways of growing food around the world, you will have seen a whole section of these, only on a much bigger scale. Mine that you see here is the backyard/home-version. We just set it up yesterday. It has 20 slots for growing veggies, herbs, and/or fruit, but I only have 15 slots filled at the moment (I'm waiting on some seeds).

I bought it through my sis who has been an avid gardener all her life. She just recently became a distributor of them after having tried them out successfully over the summer here in our hot, dry climate. She said it uses so much less water than her traditional garden, and takes so much less time and effort (no weeding)......which sounds right up my alley! This works out perfectly for us, too, since our backyard has no room for a traditional, horizontal veggie garden, so we're going vertical!

You can pretty much grow anything in it except for root vegetables, and trees of course, oh- and also no grapes or corn.

We have 2 growing seasons where I live and the wee beginnings of the second one are upon us.

Anyway, I'm so excited about this space-age looking thing that I just wanted to share.

Very cool IL! It reminds me of a modern version of the old clay strawberry pots. I also have major pool envy . . . wish that was in my back yard!

That looks pretty nifty! Have fun growing your own goodies.
S

Those are awesome at growing food, especially salad stuff and herbs.

That looks like an excellent idea for folks short on space. You'll have to post updates when you get your first harvest.

Maybe I should look into that... my new backyard has pretty limited sunny area. I'm also planning on raising chickens next year so need a way to keep my Henriettas out of the beds. Your futuristic plant tower might be just the solution...

Also, thanks for reminding me of Epcot. That attraction was my favorite part when I was a kid (precursor of my adult dorkiness I guess...).
S

snappyllama said:
Also, thanks for reminding me of Epcot. That attraction was my favorite part when I was a kid (precursor of my adult dorkiness I guess...).
Click to expand...

Mine, too. Especially the way they grow the salad greens right there using hydroponics and those towers.

That is so cool. So you put different veggies etc in each slot? We have a garden also but since we share the backyard with 5 other tenants is small and a lot of the plants are in huge buckets but they work well. Love going outside to pick my fresh herbs

That looks really awesome. Please let us know how it works for you. I have no luck growing much in our yard and that might be the answer. Especially for tomatoes and zucchini. Your yard looks like it's beautiful too.

Oh my, I.L., that is SO COOL!!! I have to admit Aeroponics is something I do not fully grasp. But it is supposed to be a very successful growing method. Do keep us posted on how it develops. And more pics, please, as the plants develop.
S

shunt2011 said:
That looks really awesome. Please let us know how it works for you. I have no luck growing much in our yard and that might be the answer. Especially for tomatoes and zucchini. Your yard looks like it's beautiful too.
Click to expand...

For tomatoes, those upside down buckets are wonderful. No staking or tying up. Just hang that bucket up and water every day. If you don't want to go buy something special, you can drill a hole in a 3-5 gallon plastic bucket and plant away.

Sorry I haven't checked back in until now. On Tuesday I spent all day tracking how the path of the sun was affecting the sun/shade patterns on the plants (every 15 minutes), in order to see if I needed to transfer any of them to better positions in the tower. Turns out my wildfire lettuce was getting a wee bit heat-stressed, poor thing, so I put it in one of the shadier slots and now it's a happy camper and is growing quite beautifully.

In between all of that tracking of the sun on Tuesday, I was also able to fashion a thermal barrier to wrap around the water reservoir to keep the temp of the water from getting too high in our hot weather. Two days before on Sunday, the water temp in the reservoir had reached 97F/36C in spite of me continually placing and re-placing packs of blue ice in it all afternoon. And the next day on Monday my hubby and I were away from home pretty much all day, and when I checked the temp when we got home in the early evening/just after the hottest part of the day, it was a whopping 101F/38C! Considering that the optimal water temp range to aim for resides anywhere between 65F/18C and 85F/29C, it became blatantly obvious in an instant that something needed to be done or our plant roots were likely to get cooked!

So we went to Lowe's and bought some insulation barrier material. It's the kind that looks like bubble-wrap on steroids encased in some kind of silvery foil-like material. With the trusty help of Pi I was able to cut out the proper lengths and make a double-thick barrier out of it, and for extra measure I sandwiched a layer of regular bubble wrap in between the two layers of insulation and taped it all together at the seams with duct tape before wrapping it around the reservoir.

Results? It fits like a glove around the reservoir and works awesome! With the barrier on there, the absolute hottest the water temp got to by late afternoon/early evening that day (Tuesday) was 90F/32C, without the use of ice at all, in spite of the outside temps being the same as on Monday when the water temp reached 101F/38C. I call that success!

Yesterday (Thursday), the outside temps were a little cooler here (98F/36F) and the hottest the water temp reached at the hottest part of the day was 88F/31C - again, without the use of any ice. In spite of going slightly over the optimal range for about an hour or so once late afternoon/early evening arrives, all the plants are doing great and thriving/growing wonderfully.

Also yesterday (Thursday) I experienced my first tower invasion. In the words of Theodin, King of Rohan of LoTR, "And so it begins". lol....

I woke up in the morning to discover a bevy of ants herding aphids up to my cucumber plant. They didn't bother any of my other plants- just the cucumber plant. I looked under its leaves and saw that there were several aphids there. So, I physically removed the aphids with Scotch Tape (works great), sprayed isopropyl alcohol on the ants that seemed to be setting up their 'base camp' on the reservoir lid beneath where the cucumber plant is located (to stun them before smooshing them), then I dusted the lid of the reservoir and around the base of the tower with food-grade diatomaceous earth.

So far today (Friday), I've only seen one lone ant. It was wandering about aimlessly on my reservoir lid (until I smooshed it). There were no others to be seen anywhere. Yay!

So far, I'm really loving this aeroponic tower concept. Here's a cool video that shows how it works:

Quite impressive! I built an aquaponics system in my basement a few years ago to grow watercress. We have a very short growing season here. Just like hydroponics, just without the expensive nutrient solutions.

Don't forget that spraying a light soap solution is great for getting rid of all sorts of bugs on your plants. Glad you defended well. Can imagine you stood there in the line of ants "you shall not pass!"

IrishLass, you are even all sciency with your gardening! I'd love to see a photo of your set-up with the heat barrier in place.

earlene said:
IrishLass, you are even all sciency with your gardening! I'd love to see a photo of your set-up with the heat barrier in place.
Click to expand...

The above pic was taken a few days ago. Today, most of my plants are about twice the size as what you see here, believe it or not. For example, the kale that you see in slot 5B has now grown over the top of the tower. It's so amazing- they are growing like weeds!

I'll see about putting up a current pic later on today. Those yellow things attached to the cage are sticky traps for catching aphids, whiteflies, gnats and things like that.

I have 2 different kinds of mint growing in the tower (chocolate mint and spearmint) and as I was out there this morning, a breeze blew by and wafted the scent of mint at me. It was glorious!

Here are some comparison pics between what the east side of my tower looks like this morning, compared to what it looked like exactly one week ago today: 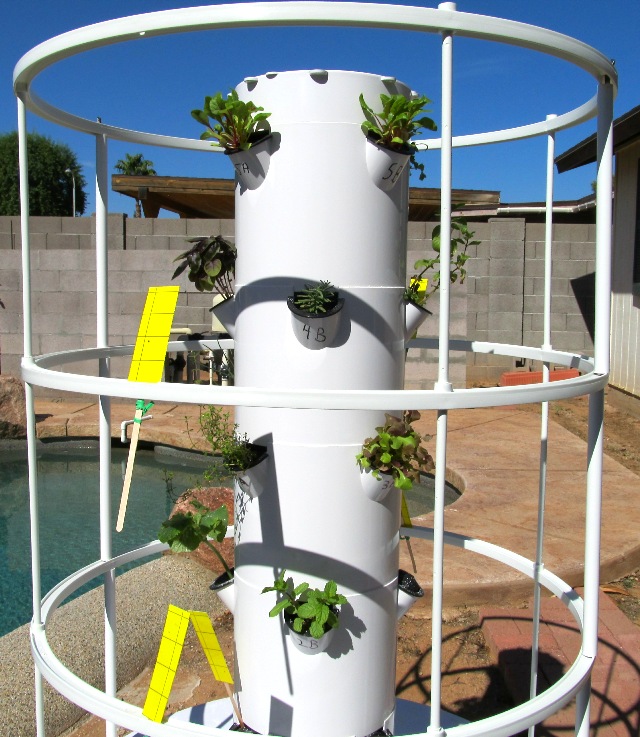 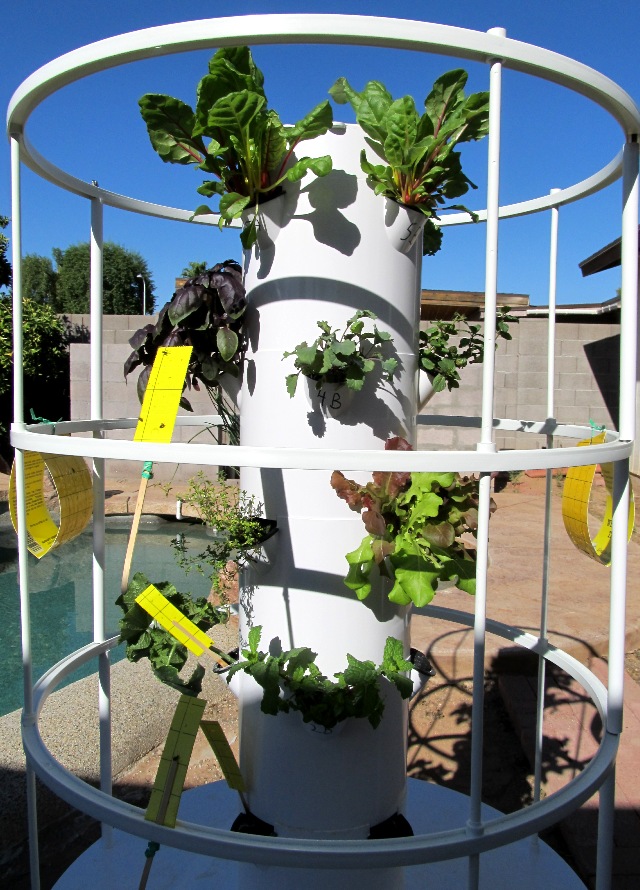 -At the top row in slots 5A and 5B we have Swiss Kale;
-In the second row down from the top, the purplish/green plant to the far left is Purple Basil;
-Dead center in the same row (in 4B) in the first pic is rosemary, but I moved it to the west side of the tower to get more sun. The plant you see there in its place in the second pic is Starbor Kale;
-To the far right in the same row is my Chocolate Mint;
-Third row down from the top on the left is my Thyme;
-Same row to the right is my Wildfire Lettuce;
-The next row down (4th from the top) to the far left is my Cucumber;
-Same row in the center is my Spearmint.

The rest of the slots are waiting for my tomato, celery and strawberry seedlings. So far, just the tomato seedlings have sprouted, but I need to wait until they have 3" of growth on them before I place them in the tower.

Holy cow, that's quite some set up. I can't believe how fast everything is growing!!!

I know, right? I can hardly believe it myself. Every morning when I get up, I go outside and take pics to add them to my log so that I can keep track of the amazing growth that seems to happen just about every time I blink. lol