Is this the same as soy wax? I was looking at the MMS website, and their soap recipe that
they use to test stuff is below.

The soap calc says 'Soy bean, fully hydrogenated (soy wax)." But if that's the case, then half the
oils are the soy wax. Would a soap that's half "wax" even be usable?

Soy wax isn't a true wax. It's hydrogenated soybean oil. I suppose the suppliers named it "soy wax" because it's often used to make candles.

Would you make a soap that is half palm oil? Or half lard? If you would, then isn't it reasonable to make a soap that is half soy wax? After all, soy wax, especially the fully hydrogenated kind, is roughly comparable to other fats that are high in palmitic and stearic acids. Examples of fats like this include lard, palm oil, tallow, and the nut butters (cocoa, shea, etc.)

edit: That said, if your soy wax is similar to the soy wax listed in soapcalc, I think you're going to find the soap won't lather well, because the stearic and palmitic acid percentage is a whopping 56%. Stearic and palmitic soap is relatively insoluble, which adds long life to the soap, but also affects the amount of lather the soap is able to make. I try to keep that percentage around 30-40% to get a long lasting bar that still lathers nicely.
Last edited: Jun 13, 2022

Carly B said:
The soap calc says 'Soy bean, fully hydrogenated (soy wax)." But if that's the case, then half the
oils are the soy wax. Would a soap that's half "wax" even be usable?
Click to expand...

Pay attention to @DeeAnna's response to your question.

Since I am familiar with MMS lye calc and recipes from back in the day (2004) when I was first starting to soap, that recipe may well have been added to their formulary early on.

To clarify
MMS Calculator lists two options: Soy Oil and Soy Wax. I would choose the Soy Oil option because back in the day, "Soy Oil" referred to the solid (hydrogenated) form not liquid.

If you compare the partially hydrogenated to the wax, it clarifies @DeeAnna 's point. 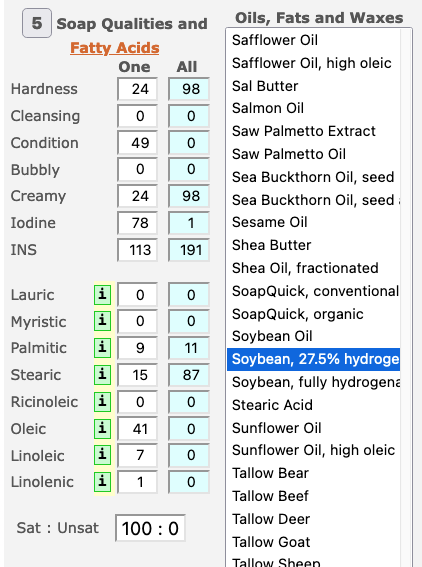 Quite a difference! I think you will be happy with the result if you choose the highlighted Soybean 27.5% to make the recipe.

Soy wax is used in soap by several soapmakers here at SMF. Some use it at around the 20% to 30% range, while I have seen it mentioned at other percentages as well. If you do a search here at SMF on soy wax soap, you'll find a lot of experience, including sourcing soy wax for use in soap, as opposed to soy wax specifically for use in candle making.

There is a thread in which the true calculator values listed for one of the soy waxes (G415) often used by some of our members was discussed and the conclusion was that neither of the standard selections in most lye calculators is accurate, not only for the SAP value, but for the Fatty Acid profiles. Here is a link to that thread, if you want to know more about that.

In my experience, how high one goes with any given oil in a soap formula depends entirely on the rest of the formula. In some cases my skin cannot tolerate high Coconut Oil in a soap, but in other formulas, it can. It really is formula (or recipe) dependent. In other words, it boils down to all of the other oils and in what proportions and also what additives are also in any given formula.

Thanks, everyone. Unless I am mistaken, the "soybean 27.5 hydrogenated" is a relatively
new entry in SoapCalc.

Not planning on making it--lots of other recipes I'd rather try, and I am drowning in soap I need to find homes
for. But it really made me curious.

Carly B said:
the "soybean 27.5 hydrogenated" is a relatively new entry in SoapCalc.
Click to expand...

I think it appeared when adding soy wax to soap became popular (ca. 2003) and when liquid soy (aka "vegetable oil") appeared on the grocer's shelves (fairly recently). All three have the same SAP value but the need to differentiate compostiion became clear.

Before that happened, I purchased solid "Soybean Oil" (aka partially hydrogenated soy) at Costco when the Original Crisco (that contained hydrogenated soybean oil and/or cottonseed oil) changed their formula.

Many of us that used Crisco for cooking didn't like the "new improved" product, including me! The first time I used it for deep frying, after it cooled in the pan, a solid disc of oil sat on top of brown water underneath. UGH!

So, happily, hydrogenated soybean oil hit the market shelves as a sub for Crisco and is a good choice for old-time soap recipes that call for Crisco.

Since then, soybean oil processed in the USA has taken a bad rap for being GMO. It is banned in many countries. But that's a discussion for another time.

That's just my take on it. Others may know otherwise. All comments are most welcome.

What do you think about this soap recipe?