One of three different soaps made yesterday, just cut this morning. Flavored with cedar EO with just a splash of lemongrass EO to freshen it up a bit. 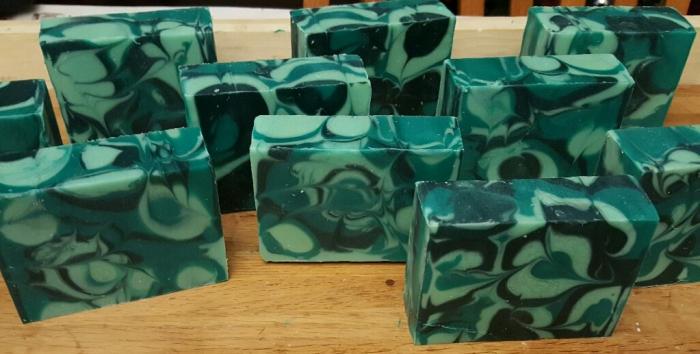 I love that Gerry!

The colors I mixed were chosen to duplicate a malachite (the mineral) type of effect using squeeze bottles. Unfortunately the idea was a fail because I was interrupted after only a couple squirts from each bottle went into the mold. When I came back 10 minutes later the soap batter was already at a good light-medium trace so I knew there was no way to get the thin layered effect I was after and more worried about just getting it out of the bottles.

It just proves that soap making is like life, things always don't go as planned. Of course friends and family I give my soap to don't know that. I even let them think the td glycerin rivers in some of my soaps were intricately planned and crafted! Haha
You must log in or register to reply here.
Share:
Facebook Twitter Reddit Pinterest Tumblr WhatsApp Email Link