How much citric acid for this recipe?

The one time I used CA before, I ended up with soap soup and tossed the whole batch. Even after trying to rebatch, it was not salvageable. This time, I'm asking the pros. I love my soap. I do not love the scum it leaves in my shower. I superfat at 5% usually; however, one batch I SFd at 10%. I'm sure the scum left behind will be breathtaking on that one! Since I eventually want to sell soap when I retire in a few years, I want to reduce the scum as much as possible. This is my second experimenter batch. I don't want to waste this one, too, since it's going to be big and have colors/fragrance in it. I am going to add green clay to it as a colorant. Don't know if that matters with the CA or not. So, here's the recipe. (I'll probably use the Shea to dissolve the other colorants: TD, spirulina and maybe paprika.). I reduced the SF to 3% because of the CA; but, now I don't really know how much to put in. The CA I have is for canning. Does that matter? Thanks for your help. 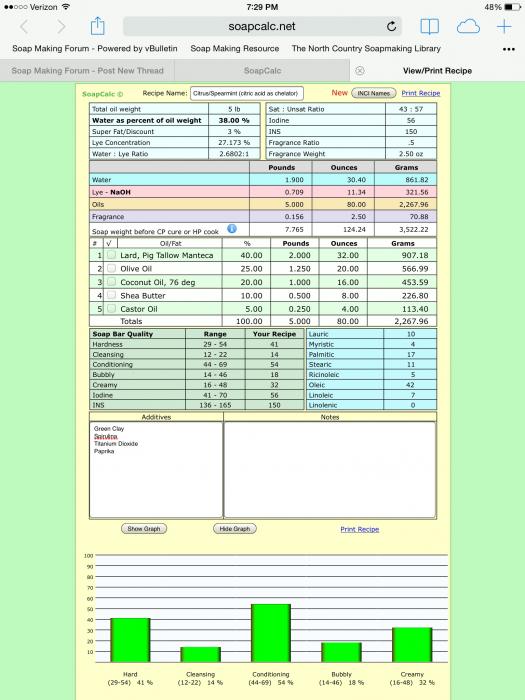 Teresa, I have tons of scum, too, and after exhaustive research, think EDTA is the best chelator/anti scum measure. Some people don't use EDTA b/c they think it is non-natural, also it is vilified for being an industrial pollutant, although I think the soapmaking usage has zero effect on the environment, so that doesn't bother me. If you are OK w/EDTA, post and we'll tell you how to mix it up. Actually, just check under "today's post" at the top of the page, there is an active thread which contains that info if you want it right away.

You have to jiggle lye amounts if using CA b/c the CA deactivates lye to some degree, I don't have the exact percentages at hand but can find the kind advice given to me on that and post it later if someone doesn't do it sooner. Don't use CA again before you have those numbers, though, you'll have soup again if you do.

From my notes which I think were from a post by Deeana are that CA will neutralize NaOH 1: .624 and KOH 1: .8. Meaning 1g of CA will react with .624g of NaOH. I think the usual rate for soap is 1-3% of your oil weight. Try an advanced search on Deeanna's posts or TEG's I know they both have explained how they do it.
K

Teresa, I see you have about 2200gms oils in your recipe. I remember reading in one of DeeAnna's posts that you need 10 grams CA per 1000 grams oils, so you would need about 22 grams of citric acid and the additional lye to neutralize that and form sodium citrate to help with scum. You can calculate the additional lye using the conversion from boyago's post, comes to about 14 grams of additional lye.

Stir the citric acid into the water you will use to make your lye solution. Add the lye to the water and proceed with your recipe as usual.

And in case this one comes up, here's the related info:

Stir the citrate into the water you will use to make your lye solution. Add the lye to the water and proceed with your recipe as usual.

OK. I was making this way too hard for myself. I had already "added" extra lye by reducing my superfat from 8% to 3% (304.98 gm to 321.56 gm) and was trying to figure it out that way. But, when I actually did the math and played with the numbers, I realized how difficult I was making it! I tried to reduce the SF so adding extra lye will give me the higher SF. (321.56-304.98=6.58 I only need 7.13 gm to make the difference in the 13.71 gm to get the 8% SF). But it doesn't matter as long as I replace the lye that the CA reacts with I'll be OK. In my case, I've got approximately 2200 gm oils. As long as I use 22 gm CA and an extra 14 gm lye, my SF can be anything I want it to be! (BTW: I read all of the previous posts about CA and EDTA as chelators today before I posted my question. Once again, I was overthinking and making everything way too difficult for myself.) Thanks everyone for your quick responses and total enlightenment.
Not_Ally, the only thing I have against EDTA is the fact that it is not on my shelf. I have got to order that stuff. I made a mistake and ordered Sodium Lactate instead. Now I'll have wonderfully hard scummy bars until I can get some EDTA. ;-) I do, however, have CA in my pantry. Maybe I'll wait for the EDTA for the big mold and just try the CA in the small mold. (But I want to try out my new mold now... It's made from a beehive tray.) 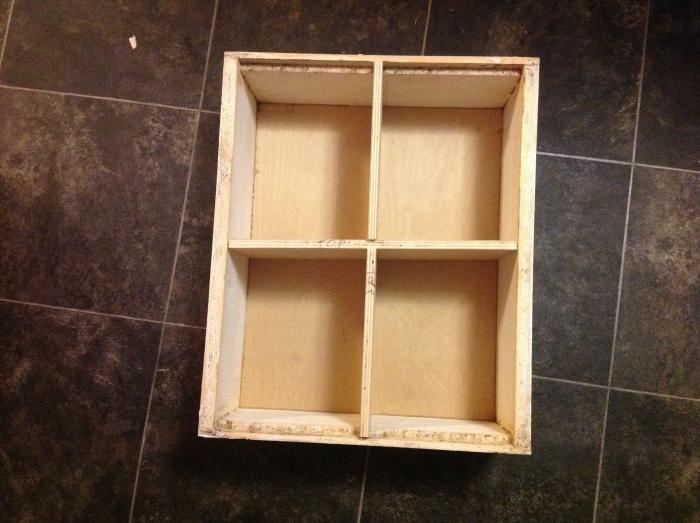 From the time Deeanna gave us the calculation I use CA and I do not see any difference in trace, I dissolve it in water before adding lye and forget about it. It does cut the scum , definitely it does.

So, Carolyn, it looks like you're using a 2% ppo dosage. Do you remember why you ended up with that amount? I'm curious to know because this question comes up a lot and it's good to know the reasoning and experience behind people's choices.

DeeAnna said:
So, Carolyn, it looks like you're using a 2% ppo dosage. Do you remember why you ended up with that amount? I'm curious to know because this question comes up a lot and it's good to know the reasoning and experience behind people's choices.
Click to expand...

since a chemist I am not, I went with trial, and found it worked well with the superfat I use which is usually lower than 5%. I have used up to the 3% with no problems and it did not affect the soap quality, but since I use a 50/50 solution it takes up to much of my extra liquid for adding in purees, milks etc
Last edited: Jun 16, 2015

Hey, thanks for sharing, Carolyn. I'm taking notes about this!