Dear Soap Friends, Is there any advantage to making my own lye? I know it is a bit more involved that just buying commercial food grade lye. Is it also true that homemade lye will result in a softer soap? Any comments are welcome. Thank you! 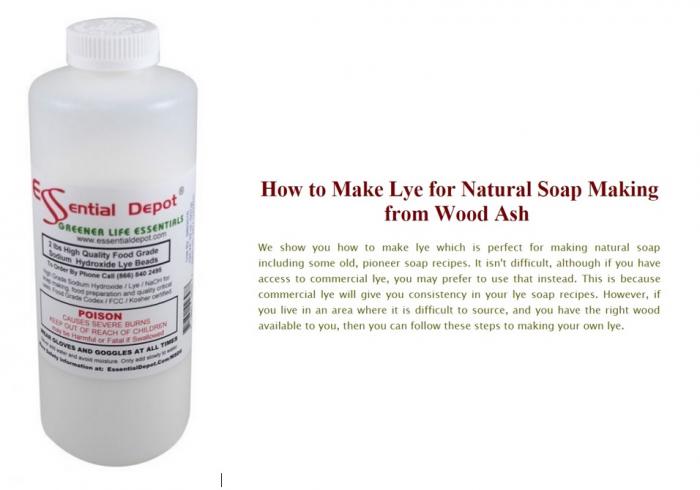 Making your own lye won't produce sodium hydroxide which is what you need to make bar soap. Its produces a lye that makes a soft soap, more along the lines of a cream soap consistency.

I've always though making your own lye would be cool just for the experience but its not practical or really safe. There isn't any way to know the purity so you would have to guess how much to use, that would make it easy to get a lye heavy soap. That is unless you salted the batch out which is a whole different mess in itself and the soap produced tends to be harsh.

If you do try it you will want to use the boiling, salting out method. This will insure you don't have too much lye in your soap, which will be a soft soap. The down side to this is you will also be removing the glycerin from your soap (no way around it) but you could add some back in afterwards.

Bottom line -- if you're a prepper or survivalist, you might find it useful to develop this skill. If your main interest is making soap, then the wood ash thing adds a fair amount of work and uncertainty to the soap making process, and it entirely changes the chemistry of what you're doing. Your call.

This comes up on a fairly regular basis, so a search will bring up even more info.

Edit: A soap made with wood ash lye is not suitable to being "boiled and salted out" since you're going to end up with mostly potassium-based soap. You need a mostly or entirely sodium-based soap to effectively use the salting out process. Potassium soaps remain soluble in salt water -- sodium soaps are not. To control the lye content in the finished soap, you'd saponify the soap batter using an excess of lye, then bring the free alkali down by gradually adding small amounts of additional fat and boiling the paste until it is zap free or has only a very slight zap.
Last edited: Jul 12, 2015
E

DeeAnna said:
A soap made with wood ash lye is not suitable to being "boiled and salted out" since you're going to end up with mostly potassium-based soap. You need a mostly or entirely sodium-based soap to effectively use the salting out process. Potassium soaps remain soluble in salt water -- sodium soaps are not. To control the lye content in the finished soap, you'd saponify the soap batter using an excess of lye, then bring the free alkali down by gradually adding small amounts of additional fat and boiling the paste until it is zap free or has only a very slight zap.
Click to expand...

From own experience I know it is possible to salt out a soap made with KOH. I almost always have KOH Castile at home and one day I decided to try salting it out. It worked as good as NaOH Castile. I am not knowing the chemistry behind it, but all I can say is it does work.

Some googling turned up a lot of older books on 'german curd soap method' where they used wood ash lye and salted it out, if that helps at all

Personally I might try it once just to have the experience, but it wouldn't produce a better bar of soap with no superfat and no glycerin at all

Okay, I realize I didn't give a full answer. Here's the rest of the story, as Paul Harvey used to say --

If you add salt (table salt, NaCl) to a potassium soap, some of the potassium soap will gradually change to sodium soap by interaction with the salt. Historical soap makers knew this, and some makers did add salt to thicken up their paste soap. But they generally didn't go on to "salt out" the soap.

The reason why they stopped at that point was that not all of the potassium soap will become sodium soap when salt is added. If you salt out this mixed sodium-potassium soap paste, the sodium soap will indeed salt out -- it will form solid curds that can be harvested and formed into a solid soap. But a goodly portion of the original mass of soap will remain as potassium soap dissolved in the brine, and it will be rinsed away during the salting out process.

If you are trying to get the best yield of soap for the time, effort, and materials you have invested in its making, you would not choose a processing method that will put a goodly portion of your soap down the drain!

As hobbyists, we have the luxury of doing things like this that are not necessarily efficient, and that's fine. By all means, salt out a potassium soap and enjoy the results! But if one is trying to get the "most bang for the buck" out of soap making, then salting out a soap originally made with KOH or wood ash doesn't make economic or practical sense.
D

Ah, thank you DeeAnna! I always learn so much from you! So that is how the old time soap makers could make bar soap from KOH! Yes they wasted a lot of soap, but for storage it was probably easier to store the bars than a paste. Now that I'm thinking about it, back then I believe they only made soap once or twice a year, saving all their fats for the purpose. Rendering must have been a pain in the butt, imagine having to do that after each slaughter!

They wasted a lot of soap to make solid soap but they were more worried about getting the hard soap than they were in using up all the soap available. What I don't know is if they kept the liquid soap for dishes and laundry.

The soap makers who used wood ash lye generally DIDN'T make a bar soap as we know it. The salt they added to their wood-ash soap, IF there was enough salt to spare from food use, was used to firm up the paste soap and make it easier to transport and sell, but they stopped at that point and didn't salt-out the soap. In the inland areas (midwestern US for example), the wood ash lye would have been mostly potassium carbonate and salt sources were few and far between. I guarantee the soap makers in these areas didn't spare salt for soap making -- it was dedicated to food and livestock use. Only along the sea coasts could be found the salt-tolerant plants that could be burned to make a wood ash lye higher in sodium carbonate -- and the extra salt that could be spared for soap making.

Except in rural or frontier areas where people had to be self sufficient out of sheer necessity, many communities had experienced soap makers who made soap, just as these communities often had dedicated bakers with the proper ovens to bake bread. It takes quite a bit of skill to make good wood-ash lye and learn the ropes of making decent soap with the materials and methods available back then.

Soap technology eventually shifted to using lime to convert wood ash lye (potassium carbonate and sodium carbonate) to KOH and NaOH, and at that point I gather some soap makers did salt out some of their soap if they had well-heeled clientele to pay for this product. The nigre (niger, waste liquid) from the salting out is not a salable product, even though the makers knew it contained useful soap. They sometimes recycled this nigre back into the soapmaking process, but a lot of nigre was dumped into convenient creeks and drainage ways. The solid calcium carbonate from the lime and wood-ash reaction was also dumped.

Solid bar soap as we know it came into common existence only after mined sources of soda ash (sodium carbonate) became commercially available. Soap makers converted this soda ash with lime to a relatively pure NaOH solution, and that was used to make bar soap. Eventually methods were developed in the early 1800s to make NaOH directly and the lime and soda ash method gradually was abandoned.
Last edited: Jul 14, 2015