I made a batch of HP soap on the 8th of September and cut it on the 9th. Unfortunately I did not take a picture of the soap the first day. When I looked at it the second day I found a couple of pieces that had a moist or oily looking spot on it, and all of the pieces now had the orangish swirls running through the soap. Since it was HP, it passed the zap test before I put it in the mold and the suds were okay as I was washing all the equipment. The oily/wet spot disappeared completely in the next day or two. Those are the first two pictures. The third picture is one of the bars, on the 7th of October, which actually shows the spots better but also shows the indentation that is currently on the bar. This has never happened to my soap before. So I haven't a clue what it is.

The day I discovered the orange spots I spent a lot of time with DOS pictures and other soaping fails hoping to find an answer. It was then I discovered not to put your soap on a metal rack...I've done it for 10+ years without it happening but I won't rule it out. I've corrected that error.

This was the end of a total failure day for soaping. I tried out a new recipe for the first time, had a nature call to the bathroom in the middle of the cook and figured what could possibly happen? Like Murphy's Law, I was longer than expected and when I came back into the room about half of the soap was oozing over the top of the crock pot and spilling oily mash potatoes onto my counter. I slopped it back into the pot, stirred well, gave up on the idea of trying to swirl in the mold, but added yogurt to the color that I had prepared, slopped some more soap into the color and tried a feeble attempt at a pot swirl. Since it passed the zap test I assumed that it was still okay. After it was in the mold I discovered that I had forgotten to add the cocoa butter to the mix.

After recalculating what I actually put in the soap, the percentages were roughly, 38% Palm, 29% Olive, 16% Coconut, 11% Sweet Almond and 6% Castor. The lye was heavy so I cut the super fat to zero and it came out very close to the actual measurements. I also added Sodium Lactate, citric acid plus EO of lavender, anise and sweet orange. The only smell I get is the same as when it was cut and it hasn't diminished to any degree.

I've cut one piece into smaller bits to test from time to time and it has a creamy lather which takes a bit of work to show, rinses off very clean and doesn't leave my skin dry. It acts like any other of my "young" soaps.

Any ideas of what I did? or What it could be? It was the first time I used yogurt for a fluid stir and the first time I forgot to add one of my oils. Everything else has been the same as I've done in the past. If I hadn't found this site I'd probably just watch it for a while and use it up eventually. I just have never pulled all of these "oops" AND had this amount of spots, indents before. 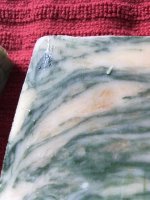 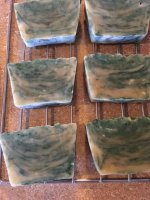 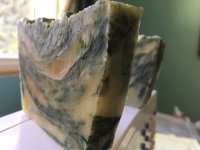 My thought is maybe the fragrances were not fully mixed into the white portion of the soap. Orange EO is yellowish and can look like that.

"DeeAnna: I thought about water content. I remember mixing the three EO's together before mixing it into the formula..then I took some of the white out to mix to the green color, then swirled it back into the pot. At that point the pot was out of the heating element, so it was cooling, but of course the crock was still warm. I suppose the amount I took out to put in the color could have dried faster since it was outside of the main pot?? And if I added the yogurt to just the colored part, that might make the difference. I just looked and it does sort of look like the indents are just in the white part on all the bars of soap. The one shown has the biggest indent, most are just a little ripply.
The orange is liberally sprinkled throughout, so that would say that I just didn't stir enough after adding it. Would the fat content in the yogurt keep it from shrinking?

I doubt the yogurt does much to prevent shrinking, but I don't absolutely know that to be true.

All I can say for sure is slight variations in water content will cause the soap to have a rippled or indented surface.

And I remember the one EO being a lot darker than the other two...I may have not stirred it as much as I usually do...never had a boil over like that and know I got a bit rattled. Thanks for the comments.

Welcome to the club! I sometimes get rattled and discombobulated too. And I've not stirred my fragrance into the batter well enough and ended up with weepy or discolored spots.

You should be proud you got such a fluid looking, attractive swirl, especially given that you were doing a hot process method. Some of my CP swirls don't look nearly as nice as yours. Yogurt really helps!

DeeAnna said:
Welcome to the club! I sometimes get rattled and discombobulated too. And I've not stirred my fragrance into the batter well enough and ended up with weepy or discolored spots.

You should be proud you got such a fluid looking, attractive swirl, especially given that you were doing a hot process method. Some of my CP swirls don't look nearly as nice as yours. Yogurt really helps!
Click to expand...

Thanks for the encouragement. I was planning on "trying out" a loaf mold swirl, after seeing all the beautiful results from the September Challenge. When the boil over happened And I found out I didn't add the Cocoa Butter to the recipe I totally lost it. I slopped the colored soap into the pot, swirled a bit and hoped for the best. Now my goal is to try out a CP soap under my belt and then trying a swirl...for me HP sounded so much easier than CP when I first started that I have never tried it. I just might be getting brave enough to do it!
You must log in or register to reply here.
Share:
Facebook Twitter Reddit Pinterest Tumblr WhatsApp Email Link