FO discoloration due to gelling?

EDITED!!! I just realized that the non-discolored blue soap from the flower mold is from a second batch I made using the same micas but a different FO. At least you can a blue that is closer to what I was expecting.

After making three successful batches of soap with new to me FOs from OT, I decided to skip a test batch with their Frankincense and Myrrh FO. The OT website states “Discolors only to cream-white.” The soap below is tallow-based and was made using 38% lye concentration. The top layer in the flower is from the batter for the bottom layer of the soap, which was at light trace when I poured it into the loaf mold. The temperature of the batter was possibly a bit warmer compared with the top layer batter (bottom of flower), which was made separately and then just on the verge of trace when I started pouring it into the loaf mold. The loaf went on a heating pad, was covered with a light blanket and got hot enough to gel. The flower mold was left on the counter, uncovered and ignored until I discovered it this morning. I made the batch last weekend.

Based on the flower soap, lye concentration doesn’t seem to be the main issue. The flower soap wasn’t forced to gel, but maybe the darker half did on its own??? I guess I need to do some testing with this one, or plan the discoloration into a khaki green design

All of the other OT FOs I’ve tested to date have behaved as expected in terms of discoloration and I love the scents (Bonsai, Peche de Vigne, Oakmoss and Amber, Cranberry Woods). 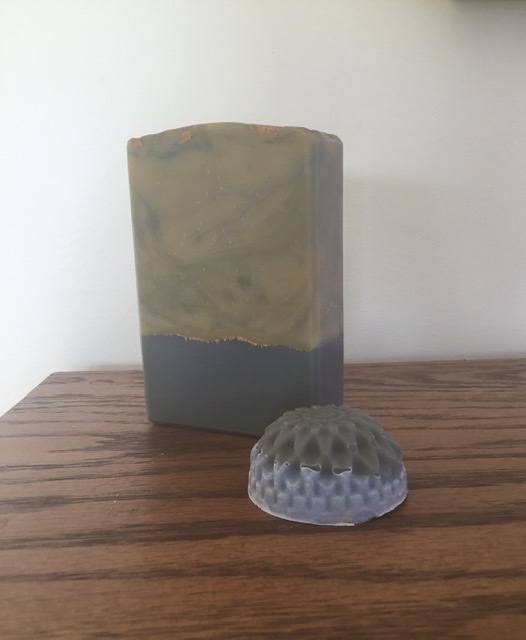 Has anyone else ever had this much discoloration from an FO that is sold as more or less non-discoloring? I keep hoping it will morph to something lighter or even brown would be better than khaki and army green.

Can’t offer any practical help, but the TS bar is actually quite lovely in a very manly sort of way. It would make a nice gift for the gents.

AliOop said:
Can’t offer any practical help, but the TS bar is actually quite lovely in a very manly sort of way. It would make a nice gift for the gents.
Click to expand...

. I can usually embrace the reality of soaping misadventures, but this one upset me because I love the fragrance and was planning to gift the soap to some special friends. With only a sample size in hand, that’s it for this holiday season. I will send it to the guys in my life and let you know how it goes

Mobjack Bay said:
Has anyone else ever had this much discoloration from an FO that is sold as more or less non-discoloring? I keep hoping it will morph to something lighter or even brown would be better than khaki and army green.
Click to expand...

I would not interpret "discolors only to cream-white" to be the same as actual white. I have also noticed one person's "tan" can be another person's "cream" so differences in perception of colors and choices of words might also be at work here.

Cream is white plus yellow or gold, so no matter how light the cream color is, it's going to morph the mica's blue at least slightly into a greenish blue. The concentration of blue pigment in the soap would also make a difference in the color shift. If you're trying to minimize a greenish cast, a little more pigment/mica added to the batch might have reduced the color shift.
You must log in or register to reply here.
Share:
Facebook Twitter Reddit Pinterest Tumblr WhatsApp Email Link