I was excited to try a taiwan swirl technique. I think this came out good, even with the hiccups I had. I used Mad Micas snow white, hot lips mixed with some pretty kitty, tahitian teal and snake island. Used their eco glitter in I think color me aqua on top.

I brought it to emulsion, hand mixed in my dispersed micas, to a light trace. I used NG camu camu fo, and from the notes on their website, it said it was a well behaved oil. Well, I added the fo to each portion then hand mixed the first one in. Then the second one I started to mix in and it sorta riced. Little bits of popcorn flat shaped bits developed in the three other colors... anyone have a guess why that could happen?

Anyways, had to blend those with the blender to get them smoothed out but got too thick. I should have given up on the taiwan swirl but heart was set on it. Too thick for this technique, but still pretty. Not the defined points, more like clunky feathers.

So are the spots air bubbles or stearic spots?

Also, thought it was interesting. The tops of the bars had more of a light coral orange, but the inside was the pink I was aiming for but not as bright though.

Here's my color palette (second) I was going for. 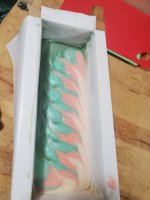 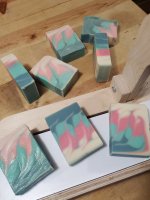 Some fragrances will misbehave despite what the reviews say. For this reason, I know by now I should always make a test batch to test every new fragrance I get, but I rarely do.
The spots do look like stearic spots to me...but I do see some air bubbles in there as well. All minor cosmetic things.
G

It may not have been exactly what you were going for, but it's still beautiful!

Thank you guys. I really liked the color combo. Will try making a taiwan swirl again to get those fine points.

I know I probably should test out the fragrances first but its such a to do for me, i don't have a microwave so I have to melt each oil in the pot first with boiling water (those brambleberry bags).

I won't be buying this fragrance oil again. This one only has a 4% usage rate and I think this needed a 6%. Its a light fruity scent. I don't think it will last through the cure but hope I'm wrong on that.

Love the palette! Very...instagram lol.
If you like a fruity scent, I used Kulu Bay from NG in a batch and it was perfect! A sophisticated fruity scent without being over sweet and it behaved perfectly in soap, no A or D or R.

Lol too bad that wasn't a giant flamingo floaty.

Sounds nice by the description. Camu camu smells wonderful but weak. Will check it out for the next rounds of oils.

Love these! I’m guessing that the darker pink inside was due to partial gel, or partial ash on top, or both. Still an excellent outcome!

did you process in the oven after you molded it? Did you use a fairy dust glitter on top? Your colors look so vibrant. My colors always look muted so I think I need to oven process to get my soap to gel (I generally warm temp soap) appreciate any advice on that!

Cosmo71 said:
did you process in the oven after you molded it? Did you use a fairy dust glitter on top? Your colors look so vibrant. My colors always look muted so I think I need to oven process to get my soap to gel (I generally warm temp soap) appreciate any advice on that!
Click to expand...

I didn't. Poured and covered it with a lid in a wooden mold. Used a fairy dust glitter on top for the shimmer.

Could try the oven. I use a heating pad generally but not on this one. I usually let it sit in a heating pad for a few hours at 170f temp. My oven is too small for cpop so I've never done that so couldn't help you with it sadly.

The words 'flamingo splash' pops into my mind. Those soaps are Excellent!! Nicely done!!