Yesterday I made a lotion, my goal was for it to be light but still good for dry skin. It has thickened up quite nicely, is the whitest white and feels weightless, spreads real easy and has kept my skin moisturized for over 12 hours now. I'm aware that the look and feel may change further in the next few days. My problem is, I'm not able to evaluate it. About 18 months ago, I went from cetaphil to homemade body butter and this is a different texture and feel from the BB. Over that same time, my skin went from being very dry and sensitive to just dry in the winter and not needing too much in way of moisturising, all glory to 'handmade'. But some of my friends aren't too enthusiastic about using body butters, can't handle rich and creamy, may be even greasy I guess. Husband is the same although he doesn't need much. Anyways, I set out to make a nice winter lotion. So, if the experienced SMFers could look at my recipe and objectively analyse it and offer any suggestions for future tweaking it would be super awesome.TIA.

The IPM at 4% was a mistake, even though I meant to use it at 2% I forgot it when I wrote my recipe down, later realized and hurriedly added double the amount, so I went down on the water which was at 64% previously.It probably threw the emulsifier calculations off as well but I see that it didn't have a negative effect so far. I would like to avoid as many lab created ingredients as possible, so if it's possible to create a nice lotion without adding the silicones and cetyl alcohol and a bunch of other stuff I read about at swiftycraftmonkey's blog, I would be such a happy camper.

K - I'm definitely not an experienced lotion-maker but have recently started experimenting and now have 2 whole batches under my belt! Both recipes came from the WSP recipe library and both turned out pretty nice.

First recipe was the Hemp lotion http://www.wholesalesuppliesplus.com/education/recipes/hemp-lotion-from-scratch.aspx. My hemp butter was smelling kinda funky and I didn't want to risk a ruined batch so I used kokum instead.

Second recipe was the Marshmallow Fluff lotion http://www.wholesalesuppliesplus.com/education/recipes/shimmery-marshmallow-fluff-lotion.aspx. I did make a couple of substitutions because I didn't have safflower oil (used apricot kernel instead) and also didn't have any vitamin E (subbed argan oil).

After using both batches, the 2nd one definitely feels more moisturizing. I can wash my hands several times before I feel like I need to 'lotion up' again. The hemp lotion has a drier feel probably because both kokum and hemp are supposed to be drier oils.

Keep the ipm at 2%. I like to combine mango and shea for both bb and lotion. Like you i also like light texture, thats why i prefer emulsified bb better rather than whipped ones.

Olive and rbo are a bit too heavy for my taste, i usually stick to swa, fco or apricot kernel.
K

Hi D, thanks for the links. Like you, I used to have dry scaly legs, that's why I love my body butter, but I feel I need some humectant action in there in the winters. That's why I use glycerine even in my body butter and that's the reason why I have glycerine and sodium lactate in my recipe. I checked those recipes out, they are nice basic recipes ( fats, water, emulsifier and preservative), with novel ingredients ( the hemp lotion). The WSP ones are 25% oils and the one in video is 33%. I think that's the basic difference between a lotion and an emulsified body butter, the amount of oils in the recipe. I think you can go even higher oils for the later. My own recipe has 35% oils, supposed to be 30. And I'm loving my lotion, emulsified body butter whatever the terminology might be. I think it's both. If you do try the recipe in the video, I would strongly suggest adding glycerine/ honey and sodium lactate, they both go in the water phase. They are at 2% each in my recipe, to offset the stickiness of glycerine and the sun sensitivity of sodium lactate if used alone at a higher percentage.
Seven, I intended my lotion to be a bit heavy to offer enough protection for dry, winter skin. I plan to make something with mango butter and SAO for the summer months. The IPM 4% was a mistake, I will make another small batch with 2% and compare both, but I'm liking this fine. I'm actually loving this, even though I don't mind using the heavy heavy almost anhydrous body butters, this is a nice distraction. If it keeps my skin happy during the deep winter months, I might ditch my whipped bb altogether.

ETA: a question. What benefits does stearic acid have in a lotion? At the moment I don't have any on hand but if it's a magical ingredient, I would like to know so I can order it and then may be make a shave soap as well .
Last edited: Nov 5, 2015

K - Is your lotion/butter too thick for a pump bottle? I really want something that's thick but not as greasy feeling as anhydrous body butter. I'm also super-jealous you have IPM! I've been reading swiftcraftymonkey's blog and have that on my 'must buy' list next time I order. I also like your suggestion to add glycerin and/or sodium lactate so I'll probably tweak the Winter Body Butter recipe to include some. Since I haven't made any lotions without stearic I'm probably not the best one to ask what it brings to the party. I think it helps thicken and add body without the greasiness . . . it's actually more waxy than greasy. But I'll be an enabler and say that you must get some for shaving soap/cream soap making
K

I actually don't have pump bottles to put the lotion in. I poured it while it was still fairly fluid into a round bullet bottle with a disc top. Two full days later it's coming out fine with a little squeezing, but I would probably use my round jars next time.
I first heard the word IPM here on the forum, from Shari in a body butter thread started by the good gent. I hopped over to that fantabulous lotion blog to read further and around that same time I was ordering some stuff from soapers choice, so I added that in. Nice place with a decent selection of quality ingredients at low prices. That's where I got my e-wax and SL also.
I will try not to forget stearic acid in my next order. Last time I ordered some supplies from them I remembered SA exactly 2 minutes after completing the transaction. What a bummer. I called the CS but they talked me out of adding it to the order as I would have had to pay an additional amount in shipping. Good service.

I'm no expert, but that seems a little high on the oil content. Ultimately, if it comes together as you want it to and feels the way you want, that is all that matters .
K

Yes Chris, it's heavy in oils, but this one I intended to make so for winter skin. It's more like cream now, like an emulsified body butter, best suited for jars. Here is how it looks. 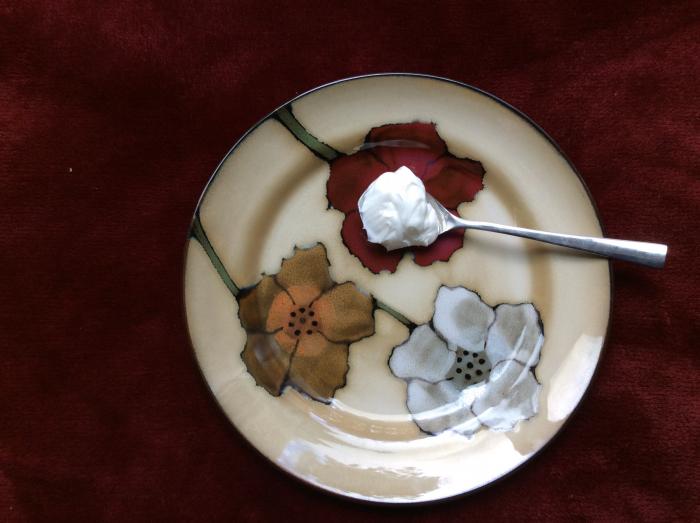 kumudini said:
Yes Chris, it's heavy in oils, but this one I intended to make so for winter skin. It's more like cream now, like an emulsified body butter, best suited for jars. Here is how it looks.
Click to expand...

I'm going to make my first facial moisturizer this weekend that is targeted at dry/winter skin. I have some hydrosols and aloe to use, along with the usual staples. We'll see how it turns out!
K

Paintguru said:
I'm going to make my first facial moisturizer this weekend that is targeted at dry/winter skin. I have some hydrosols and aloe to use, along with the usual staples. We'll see how it turns out!
Click to expand...

Good luck to you.
This is my second attempt at lotions, and I'm finding that my facial skin doesn't like either the emulsifier or the preservative. While they are great for the rest of the skin, my face just about started to break out. Im thinking it's those because the anhydrous body butters don't do that to my face nor do my highly superfatted soaps with all sorts of oils and butters.
Hope you can make something that suits your skin well.

kumudini said:
Good luck to you.
This is my second attempt at lotions, and I'm finding that my facial skin doesn't like either the emulsifier or the preservative. While they are great for the rest of the skin, my face just about started to break out. Im thinking it's those because the anhydrous body butters don't do that to my face nor do my highly superfatted soaps with all sorts of oils and butters.
Hope you can make something that suits your skin well.
Click to expand...

My first attempt came out a bit thin for my liking. They hydrosols gave it a pretty strong scent, which my daughter wasn't a fan of (along with the thinness of it). Of course she is 4, so she has an opinion on everything, especially since she's only used anhydrous products thus far on her face. I'm going to add some Shea butter next time to thicken things up a bit.

The butter in that video looks interesting but I do not feel like going out and getting jars for that. I should probably suck it up and a few.

I did end up making the butter in the video and it turned out light and fluffy like body frosting. Definitely think you need jars for it, maybe something from the dollar store if just for personal use.

Could y'all please clue me in on what IPM is...I feel woefully ignorant
S

cerelife said:
Could y'all please clue me in on what IPM is...I feel woefully ignorant
Click to expand...

It reduces the greasiness of the lotion. Not sure if that was mentioned or not.

doriettefarm said:
I did end up making the butter in the video and it turned out light and fluffy like body frosting. Definitely think you need jars for it, maybe something from the dollar store if just for personal use.
Click to expand...

I didn't quite use this recipe but I did make a cream type lotion with about 70% water (which is about the same percentage as the amount used in the video) and 5% each of stearic acid and ewax. I like the result but I like my stinky lotion a bit better as far as moisture retention goes. I have to compare the oils used and reformulate a third time.