Hi thanks to the advice from the people on this forum I now have a much clearer view on how to achieve a harder bar of goats milk soap.
I have been experimenting a lot in the last couple of weeks.
Until now I was too hesitant to put in 28% in the lye concentration box on soapcalc however I'm still not happy with the hardness of the goats milk soap. I'm waiting up to a week before cutting its so soft. Maybe because it's summer here in Australia? I'm not sure why it's so soft .
Anyway.
I have bulk purchased sustainable palm oil and have limited my coconut oil use and eliminated rice bran completely and have slashed the olive oil amount ( too much makes it hard to whiten I find) . I am hoping someone could look at the recipe attached and see what they think please? After taking on everyone's advice ( although a few did conflict) I'm hoping this time I'm on a winner. 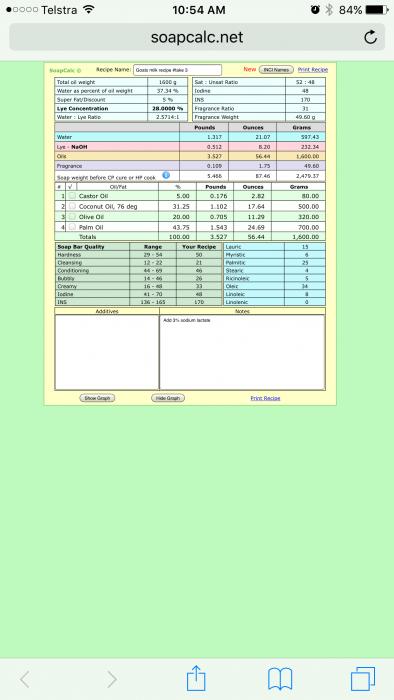 Are you replacing all the water with goatsmilk? I usually use 50% GM in mine. Also, high olive will give you a yellow-green tint at the start but it cures out to just barely off white. The GM will give you that ivory colour as well. I usually keep my coconut under 20-25%, and my olive around 30-35%. I also use palm and castor. My bars are super hard.

Can you give us some more info on your process? How long are you curing?
Last edited: Feb 7, 2016
L

And your method?
L

All of the liquid is goats milk .
Method is keeping milk as cold as possible while adding very small amounts of lye over time slowly so milk does not get too hot until all the lye is dissolved then add to cool oils . Cold processed method.
Why only 50% Gm and 50% water? I have a lot of it so I would prefer to offload as much as I can into a bar of soap. Is the time frame of waiting for the lye to mix and cool with the Gm shorter with a 50/50? Or is it just a cost issue? I have seen that plenty do it this way whilst browsing recipes online . Does goats milk soap take longer to harden compared to using water. Thanks

There was an interesting blind test done a while back with real milk, powdered milk and no milk - people could barely notice a difference but most preferred the non-milk soap! It was one test, so not up to 6-sigma standards, but it does give us an indication of whether or not 50/50 or full milk makes a difference to the soap itself (it would seem not to, unless it makes it better than a 100% milk soap).

So then we look at the process and the fact that you can then masterbatch your lye solution before and still use milk with the 50/50 method is a big plus. As is being able to really see that the lye is dissolved and so not having to worry about heat when just using water to make the solution and then adding the milk in to the oils directly.

Have you considered adding sodium lactate to your soap recipe? I think the maximum is 3%.

I understand you hesitancy to use less liquid, but the amount you have been using is working against you. Truly, if I were you, I would do a 33% lye concentration instead of 28%.

I really think you'll like 33%, which is actually rather tame as lye concentrations go. Although things will move a little faster with a 33% concentration than with a 28% concentration, it's not so fast that it will knock you off your feet or anything like that.......as long as your FO is a nicely behaved FO, that is.

To me, 33% is my 'Goldilocks' concentration...it's not too fast and it's not too slow...it's just right. I've been comfortably using 33% since about the middle of my first year of soaping.....which is my way of saying that it's not a concentration that's reserved only for the more experienced.

To me, 33% is my 'Goldilocks' concentration...it's not too fast and it's not too slow...it's just right. I've been comfortably using 33% since about the middle of my first year of soaping.....which is my way of saying that it's not a concentration that's reserved only for the more experienced.
IrishLass
Click to expand...

Boy oh boy was I reminded of this yesterday when I forgot to change the values in SoapCalc and soaped at --gasp-- 26% lye concentration. Despite CPOPing it is going to take forever to harden up enough to unmold. Soleseife no less! Also going to take all the good advice here and up lard or tallow to 60 percent of oils.
D

I use 50% water and 50% canned milk. I do that b/c I can dissolve my lye in the water and not risk burning the milk. But it sounds like you have actually mastered the 100% fresh milk method, so kudos to you!

Looking at your new recipe, I think you will find it to be a hard bar!

I don't remember the details of your previous post. Did somebody suggest 5% beeswax? I LOVE my soap that way. But you may have to soap it too hot to keep the wax melted.

Also, I've found that clove EO makes a very hard bar of soap. It will seize FAST, but the soap is very hard.
L

This is the recipe I bloody meant to post omg I have two in my photo album side by side . This is 33% I'm sure it's so tiny when I try and upload it hard to see
I don't mind doing the lye slowly as long as I get to use as much goats milk as possible the dog is sick of it and we had no orphan lambs this year . I want my freezer space back!
I am using sodium lactate now and I noticed the difference straight away with taking it out of the mould .
I see now what you mean with the 50/50 . When I am too impatient I have noticed clumps of lye . Yes I could see how it could be a problem.
I only use essential oils as fragrance and only a few cause me some pain with fastening up trace.
Thank you for all your knowledgable answers . 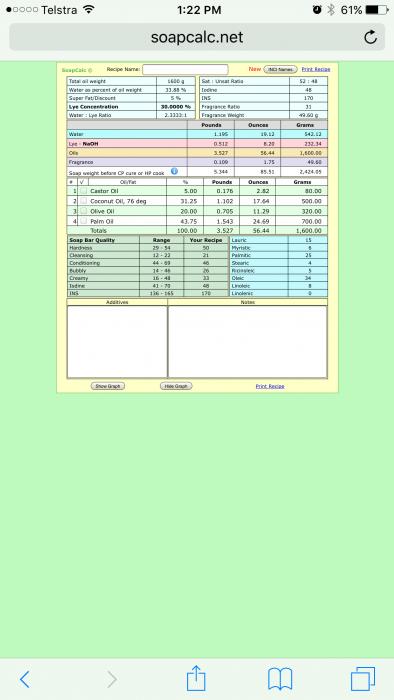