This is the entry thread for the February 2022 SMF Soap Challenge - Ocean Inspired. You are welcome to post more than one photo, but the photo you want used for the voting survey should be at the top of your post. Your entry may include information about your design, process, colors, fragrance or inspiration. Please post any comments to the general challenge thread February 2022 SMF Soap Challenge - Ocean Inspired.

Prior to posting, please review the General and Specific Rules for this challenge, here.

After the closing date on February 24, 2022 at 11:59pm GMT the winning entry will be chosen using Survey Monkey. Voting will be open February 25-26, 2022 and the winner will be announced on February 27, 2022. There is no prize attached to this challenge.

Good luck to all participants! I look forward to “sea”-ing your entries. 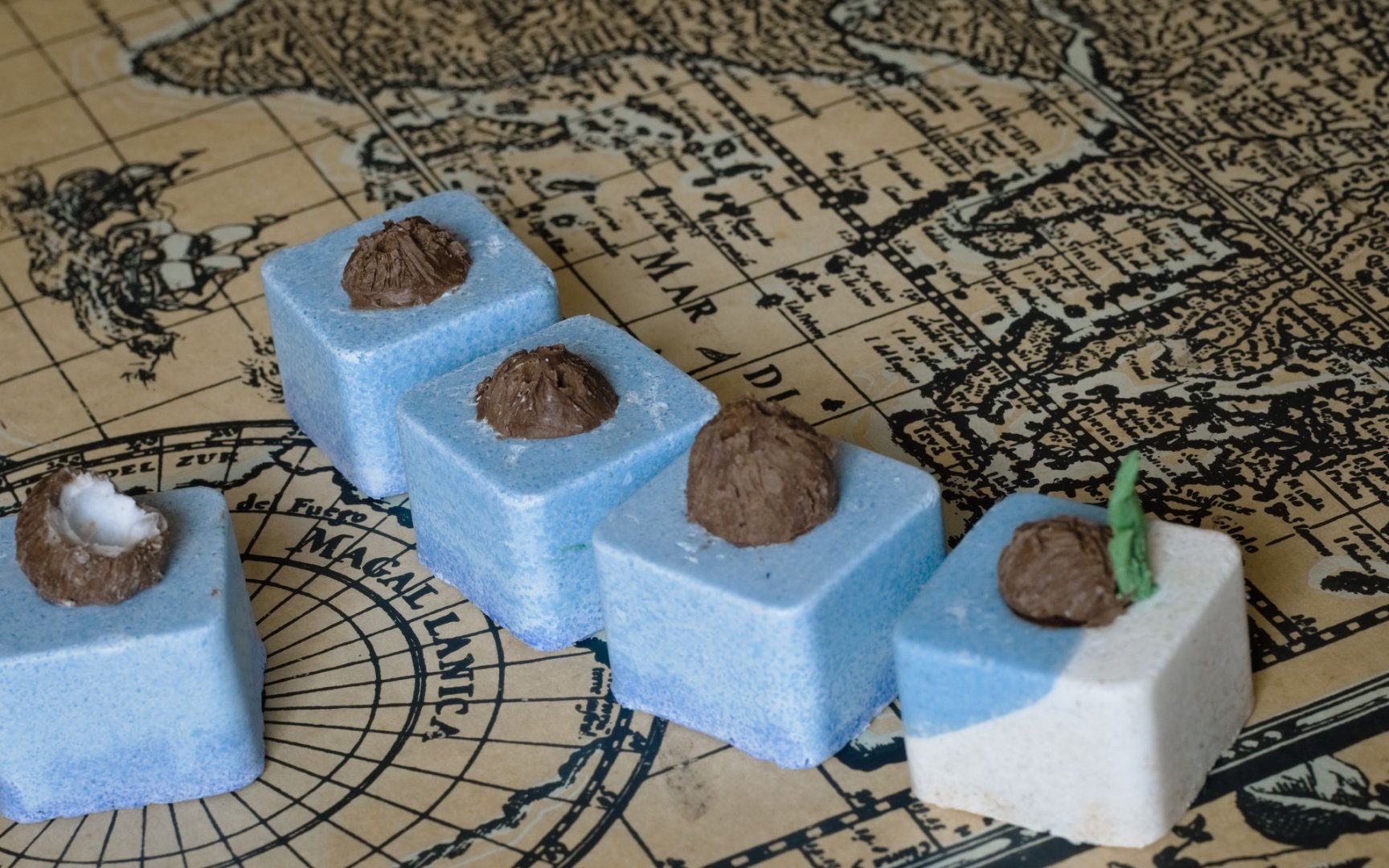 Coconut Over The Salty Sea

A long time ago, I heard a proverb said to originate somewhere in the Indo-Pacific (its wording however faded from my memory, and it bugs me out that I wasn't able to relocate it again

). Roughly reconstructed from my memory: You can only call an island a real island once a coconut palm grows on it.
Background: Coconuts fall/roll into the sea, and the waves carry them away, to wash them on the shores of other islands. This clever “island-hopping” is a major spread strategy for coconut palm trees, and among the reasons why they invest so much energy into their seeds. Once thought that this was the reason for coconuts to occur all over the tropics, experts nowadays agree that much of the spread was man-made rather than by the chance of waves and wind.
But still, I like the metaphor that a random coral sandbank, once mature enough to bear a coconut tree, can officially “advance” to an island proper.

In my soap, the ocean is the bearer of the coconuts, cradling them through vast grid squares of anonymous, salty sea water. Some lucky day, the coconut is washed ashore an isle (rightmost soap cube), to take root and germinate there. (Although nonsensical within this narrative, I couldn't resist to “crack open” one of the coconuts – bottom left).

This is (of course) a salt bar, made (of course) from 100% coconut oil, at 20% lye discount, and (of course) with a truckload of sea salt.
The process was split in three, the first sub-batch was plain soap dough (30% lye concentration, no salt. This dough was so awfully sticky that I had to leave it open overnight to make it hold its shape and not just cling everywhere). Then, the two main batters (blue and white). They are the salt bars with 100%TOW salt, at 25% lye. It's a bummer that the ombré pour just barely come through.

I decided to take what I hope is a different path with this month’s theme - mostly worked as planned but it accelerated a little so I had to hustle. Fragrance is 8th and Ocean, color is iron oxide and ultramarine blue. My grand vision was a finer-lined moon reflection but the batter didn’t allow. I still like it though. 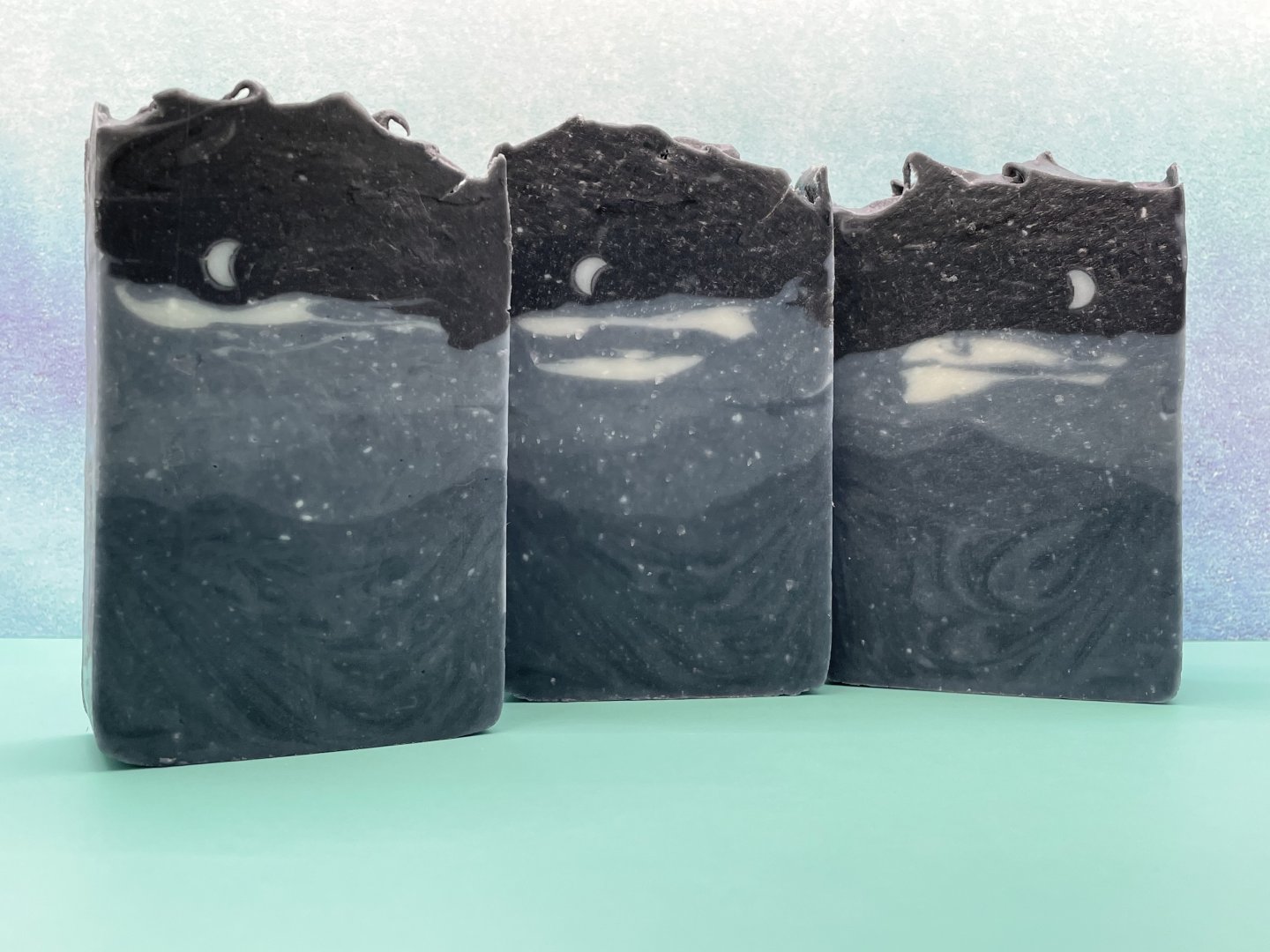 I took my inspiration from the woodblock print The Great Wave off Kanagawa and using a technique from Etsuko Watanabe (link below). I was lucky enough to travel to Hawaii earlier this month and my colors were inspired by the colors of the Pacific there, ranging from turquoise to deep blue. The round soap was made in a round cavity mold with extra batter. This soap is scented with Celestial Sea from Fragrance Buddy. 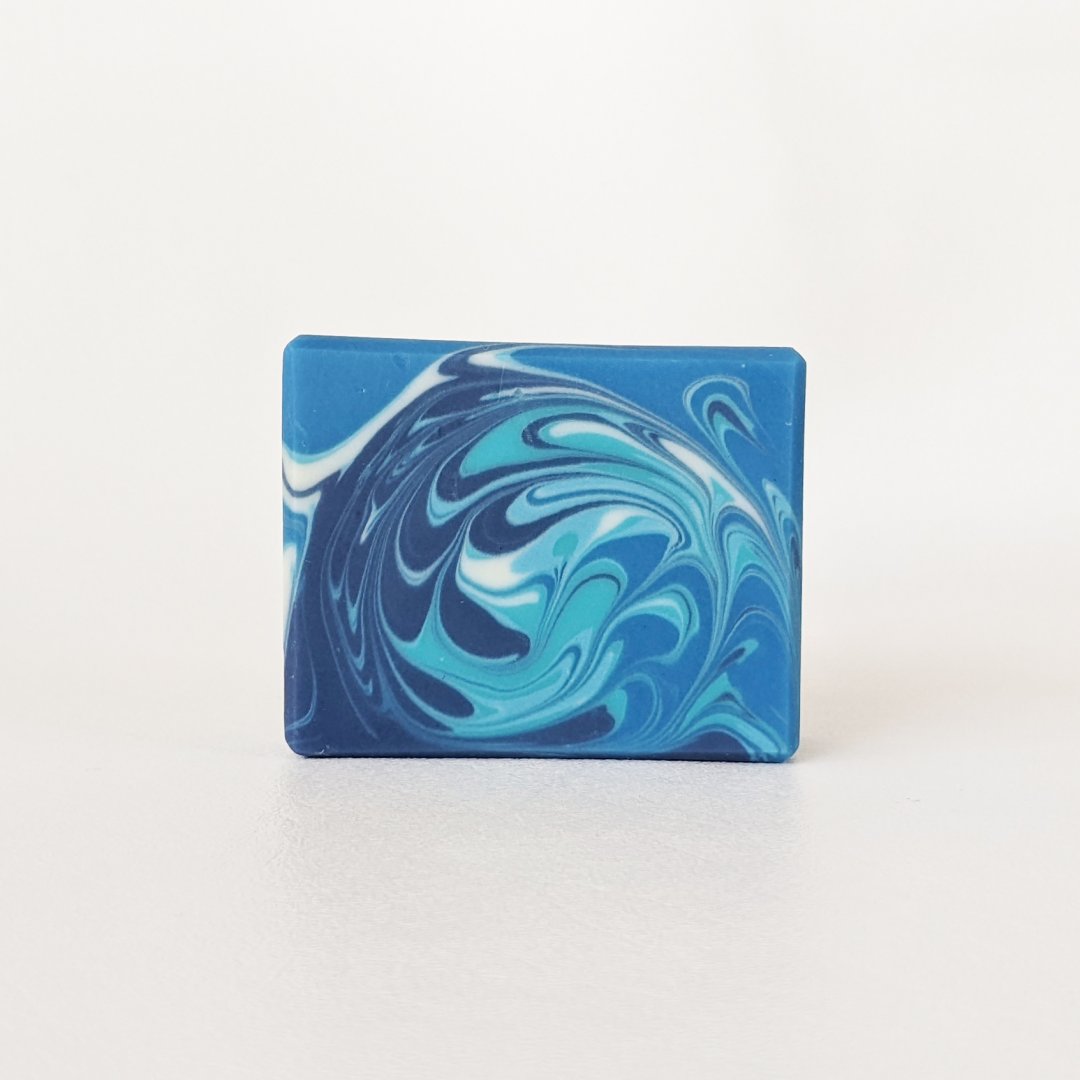 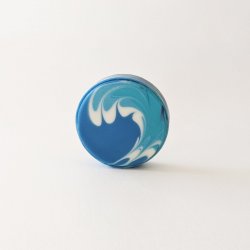 As an extra, here is a picture of a baby humpback whale practicing breaching (so fun to watch), and a photo showing the color of the water against the white parts on a whale. 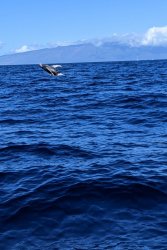 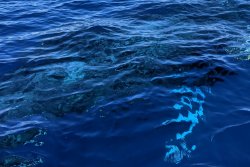 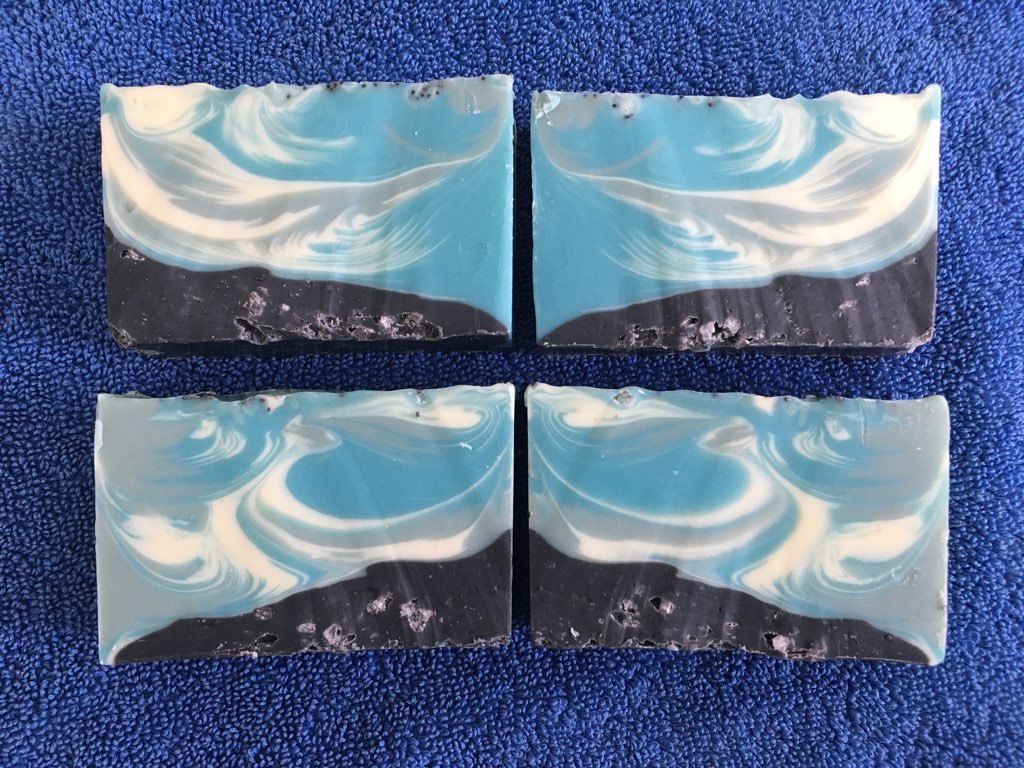 My immediate inspiration was the ocean and beaches of Hawai'i on the Big Island of Hawai'i. Mrs. Zing and I celebrated our 25th Wedding Anniversary a few years ago, trip of a lifetime. I loved the black sand beaches of Punaluʻu and Kehena (Dolphin Beach). The soap is scented with rosemary, lemongrass, eucalyptus, and cedarwood (Seascape from eocalc.com). The sand is colored with activated charcoal and includes sea salt and poppy seeds. First time using One Pot Wonder and will definitely do it again. Thank you, @Mobjack Bay for this opportunity! 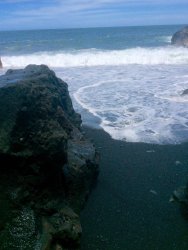 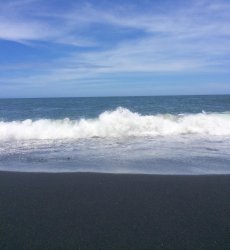 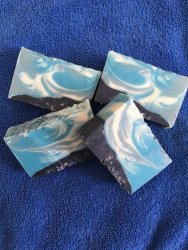 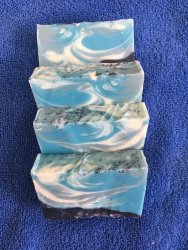 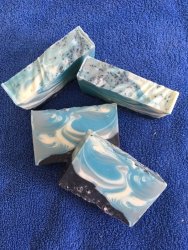 Hi everybody! The design I intended to use for this challenge did not gel. Luckily, I had enough leftover batter to fill a 1 lb. mold, which did end up going through gel. This one’s called Life’s a Beach.

All colors are from Nurture Soaps. For the water, I used the colors Dark Navy Blue, Brilliant Blue, Rainforest, Proud Peacock and Winter White. For the sand I used Rapunzel and vanilla powder from Soma Sundries. The fragrance I used is Crisp Juniper, also from Nurture Soaps. 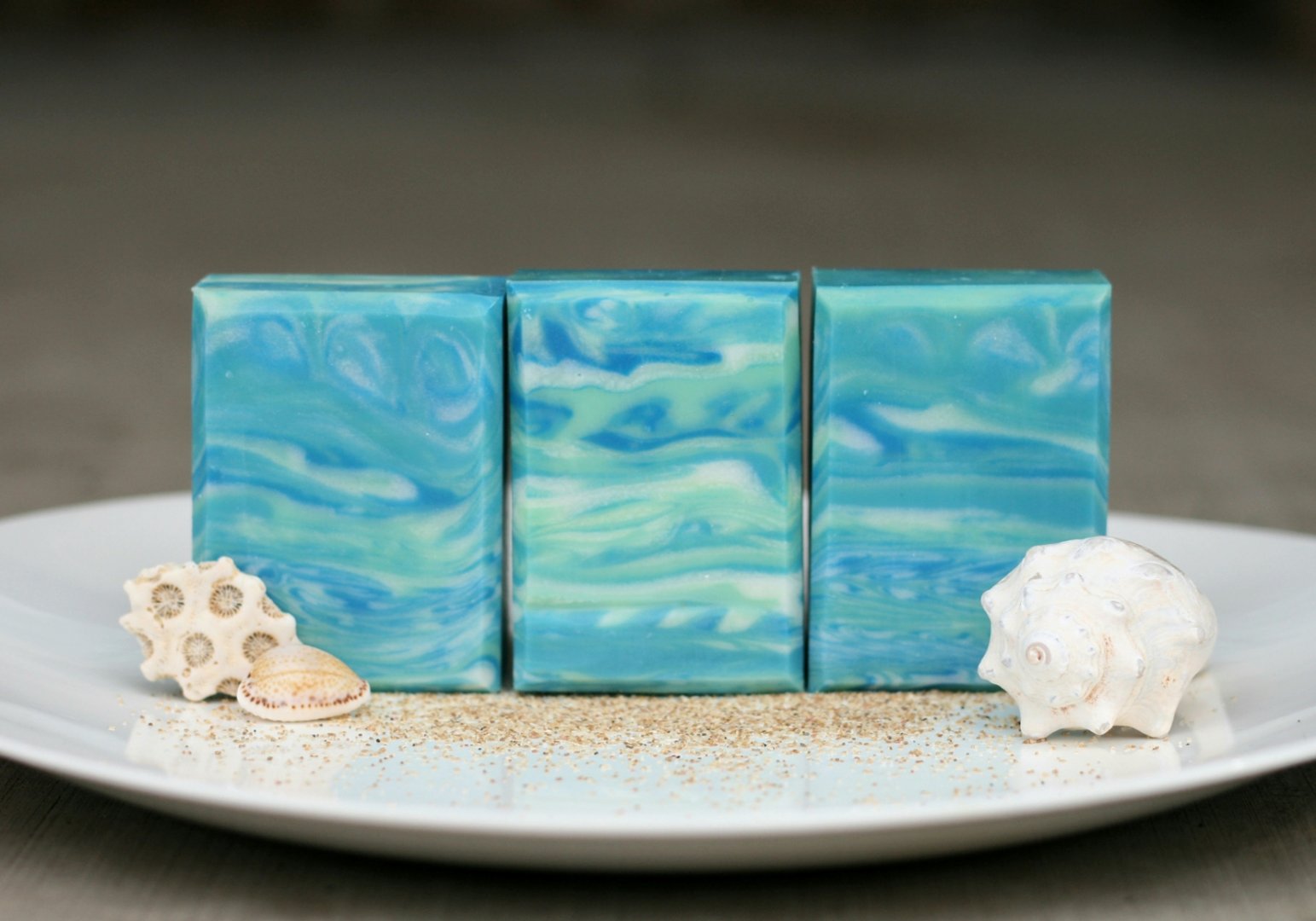 My entry was made using the technique by Yvonne that @Mobjack Bay posted in the challenge introduction, except that I used a regular loaf mold instead of a slab mold. The bars are cut horizontally rather than vertically (like you would cut a circling taiwan).

Being undecided on which fragrance to use, I mixed four—Energy, Blueberry Thyme, Bali Breeze, and White Tea & Ginger. Colorants were Mermaid Blue, Caribbean Blue, and Kelly Green micas, along with titanium dioxide. (I may have also used a smidge of Kermit Green. When I start tweaking colors, I don't always remember what I added.) All fragrances and colorants are from Bramble Berry, with the exception of the TD.

Fun fact: The shells, sand, and coral on my photo were gathered in Puerto Rico on a memorable mission/sightseeing trip in 2018. While there I saw the most beautiful oceanscapes I've ever experienced. (See photo below.) 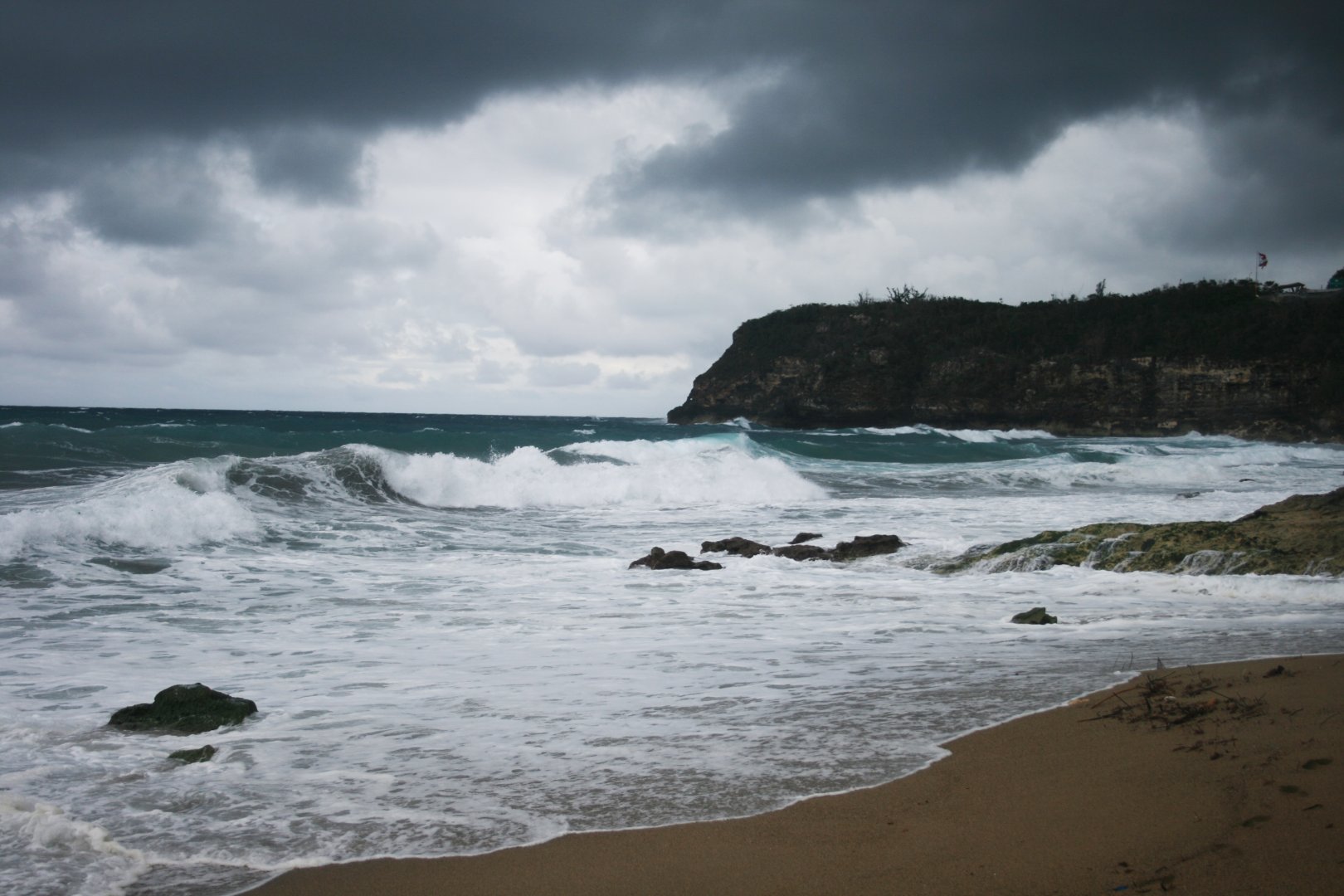 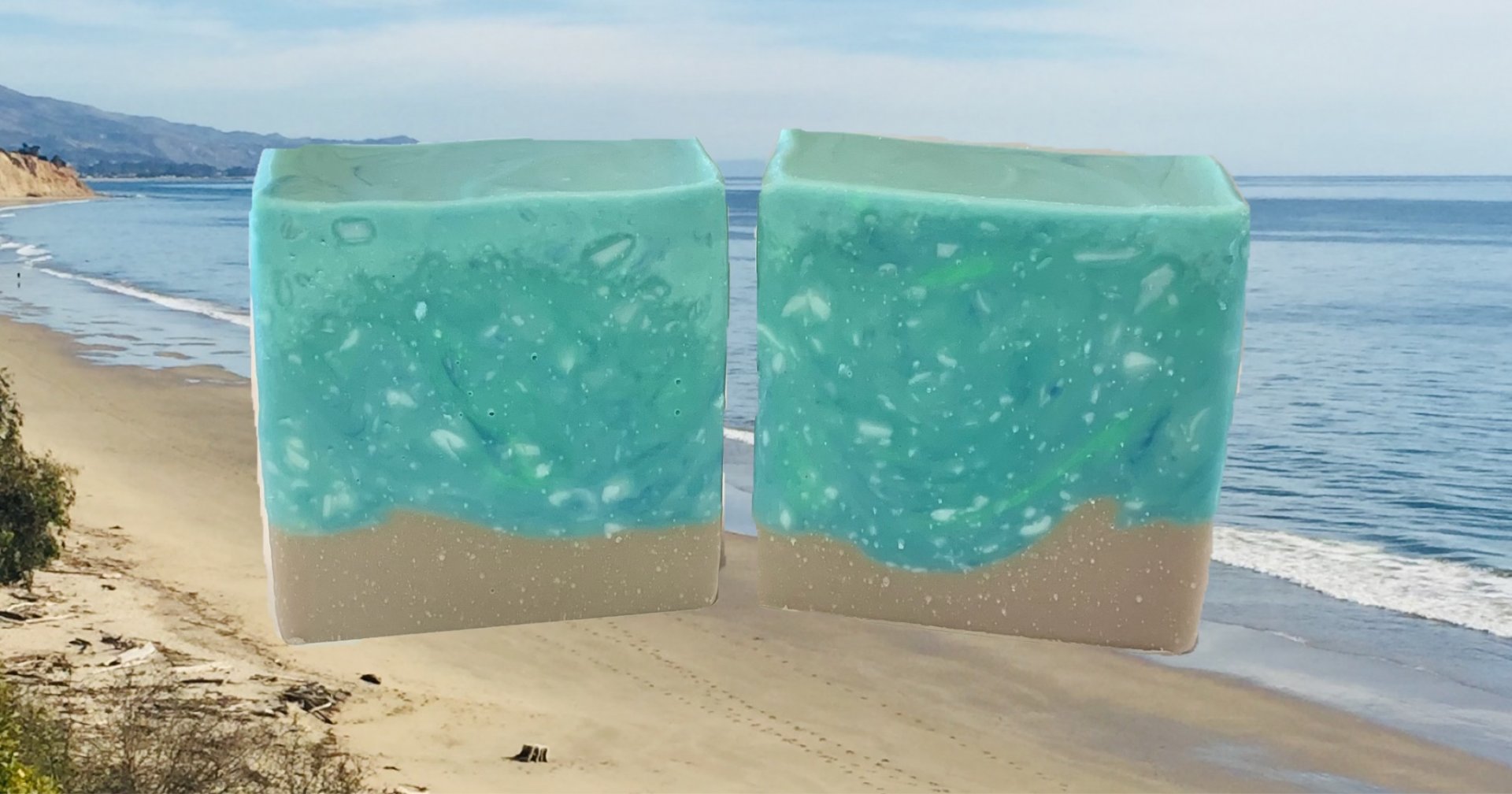 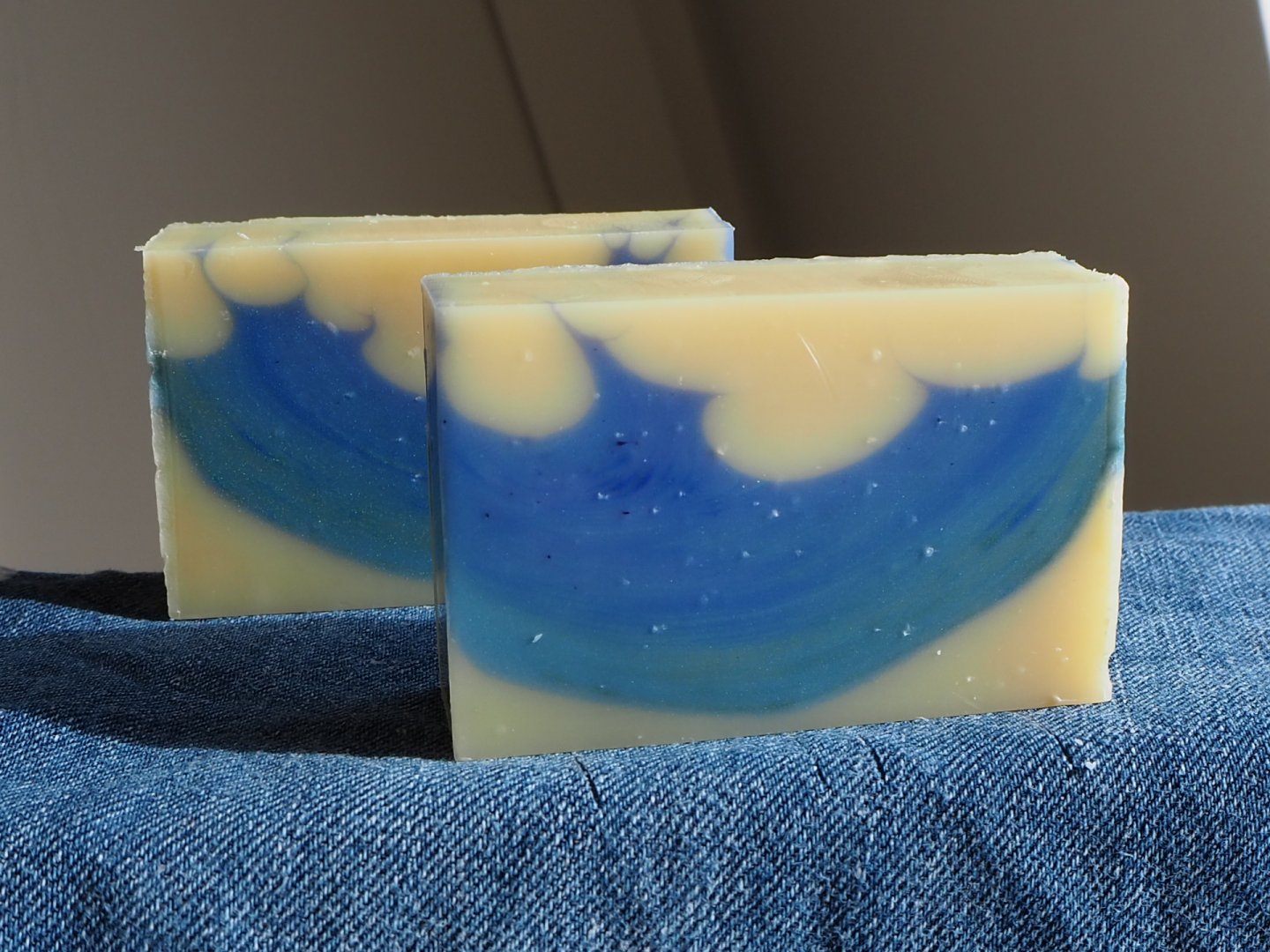 The technique is the one shown in this YouTube Wave Soap video (there are no English subtitle and the camera angle isn't the best at all times, so I combined this video and the One Pot Wonder instructions from the great Cheeky Goats Soap video posted in the challenge introduction). I liked the idea of a single element, the wave, standing out.
Coloured with micas and unscented for once. The stearic spots wanna-be bubbles were a (happy?) accident, now they are kinda growing on me!

This was my first time using the One Pot Wonder technique and I'm in love. Thanks for the challenge!

Scented with piña colada from Lone Star candle. I was inspired by beach drone pictures. Most of the blue dots are embeds but I underestimated how many I needed, so I did some inlays as well. 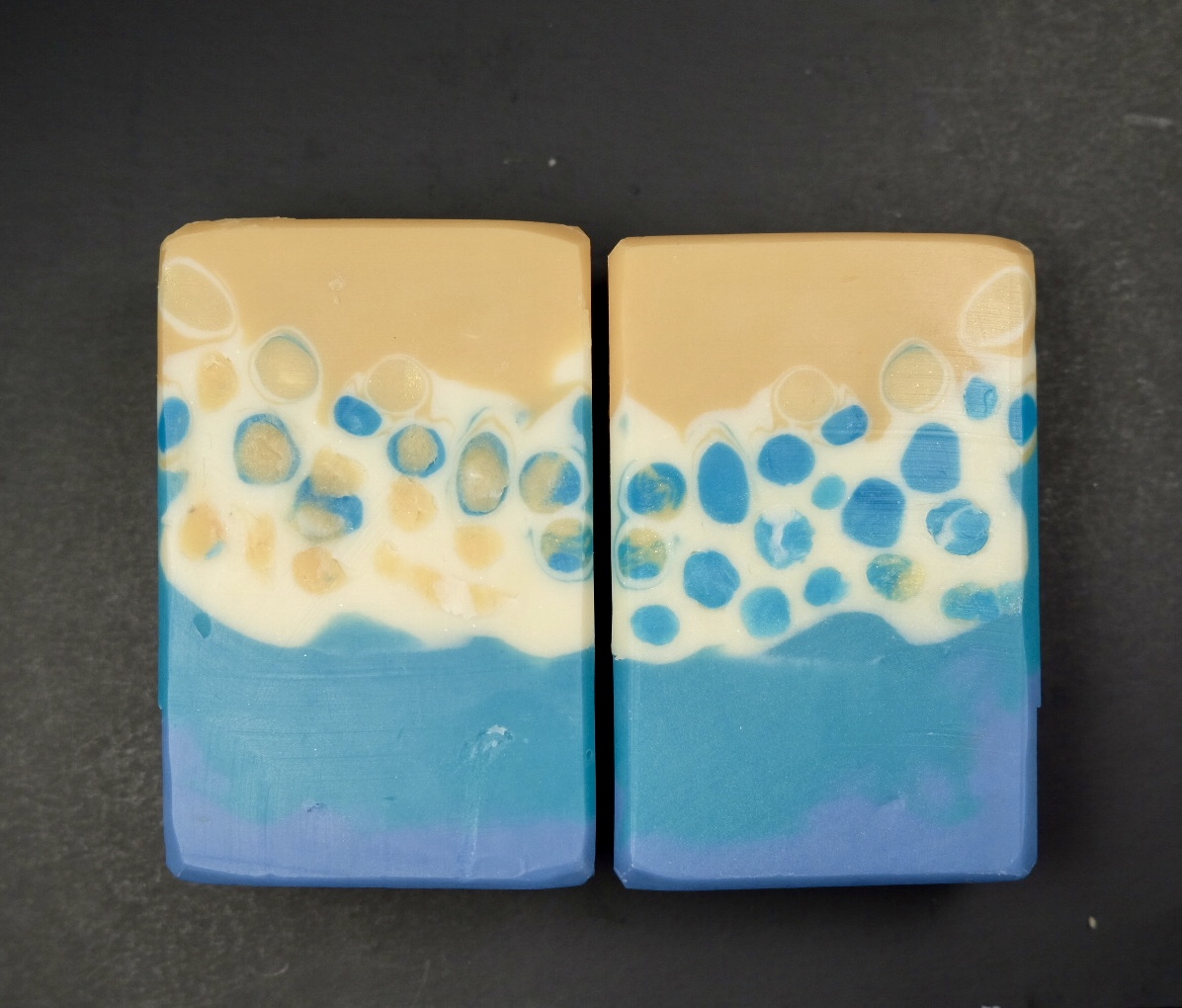 Such beautiful soaps from everyone!
Last edited: Feb 23, 2022

As a reminder, this is the challenge entry thread. Please post any comments to the general challenge thread February 2022 SMF Soap Challenge - Ocean Inspired.

My first FO I used in soap was a DG Blue type. It still reminds me of a luscious seaside resort. This is my Ocean Blue

The entry thread is now closed. Thank you everyone for making beautiful soaps. The link for the voting survey will be sent soon.

Our winners this month are:

Congratulations to the winners and to everyone who participated!

PepperJack said:
Such beautiful soaps from everyone!
Click to expand...

It's too bad you just missed it! You could have been a contender!