This is the entry thread for the July 2022 SMF Soap Challenge - Kiss Pour Technique. As a reminder, this entry thread is for challenge photos only. Please post any comments to the general challenge thread here.

You are welcome to post more than one photo, but the photo you want used for the voting survey should be first, at the top of your entry post. Your entry may include information about your design, process, colors, fragrance or inspiration.

Good luck to all!

Here’s my “Kiss-Pour” soap. Colors are Mad Micas: Brazen Hussy, 3 Olive Martini & Snow White. Fragrance is Cantaloupe & Lily mixed with Watermelon. Both from Aztec. I call it Watermelon Dream. I forgot to mention that this is a “wandering kiss-pour”. I moved my pouting pitchers across the mold.

My soap was inspired by the Grand Prismatic Spring at Yellowstone National Park (picture #3). Here’s the finished product. (Pics #1 and #2)

I’m so in love with the spectrum of colors! The last picture is of my soap before I cut it.

And finally, just for funsies, I thought I’d show y’all what I did with the leftover batter (second to last pic)

So here’s my three layered disaster with accelerating FOs.
Of course when I saw the layered example in Dibbles challenge outline, I thought I’ll do that one! Well, 14 dirty soap jugs, bowls, and pots later (that’s not including the six little ramekins I mixed up my neon colours in) here is the result. The bottom layer has two colours in each pot: teal and yellow, lime and white. This first layer was plop and spread (with a wee kiss on the way down) and that’s when I realised I shouldn’t have used the accelerating FOs. Oh well, in with the next layer: rose and white in one pot, neon pink and purple in the other. This one I was more prepared for the acceleration so they were relatively successfully kissed and poured, albeit a gloopy pour. And they didn’t blend well on the way down, so they’re kinda stuck on the sides they where poured into. Finally the top layer was the most successful kiss. I used a bit less FO for this one, except for yellow which ended up being Mr Blobby. Yellow and blue in one pot and lime and white in the other. Yay! A good kiss and a bit of a ‘cosmic swirl’ action on the way down.
We know that this is not perfect of course, but I showed a friend the cut and she said WOW it looks like a scene. So I won’t have any trouble selling it thank goodness.
The second pic is the entry pic, and the others purely for your viewing pleasure, lol. I cut some into wee half sized bars too. 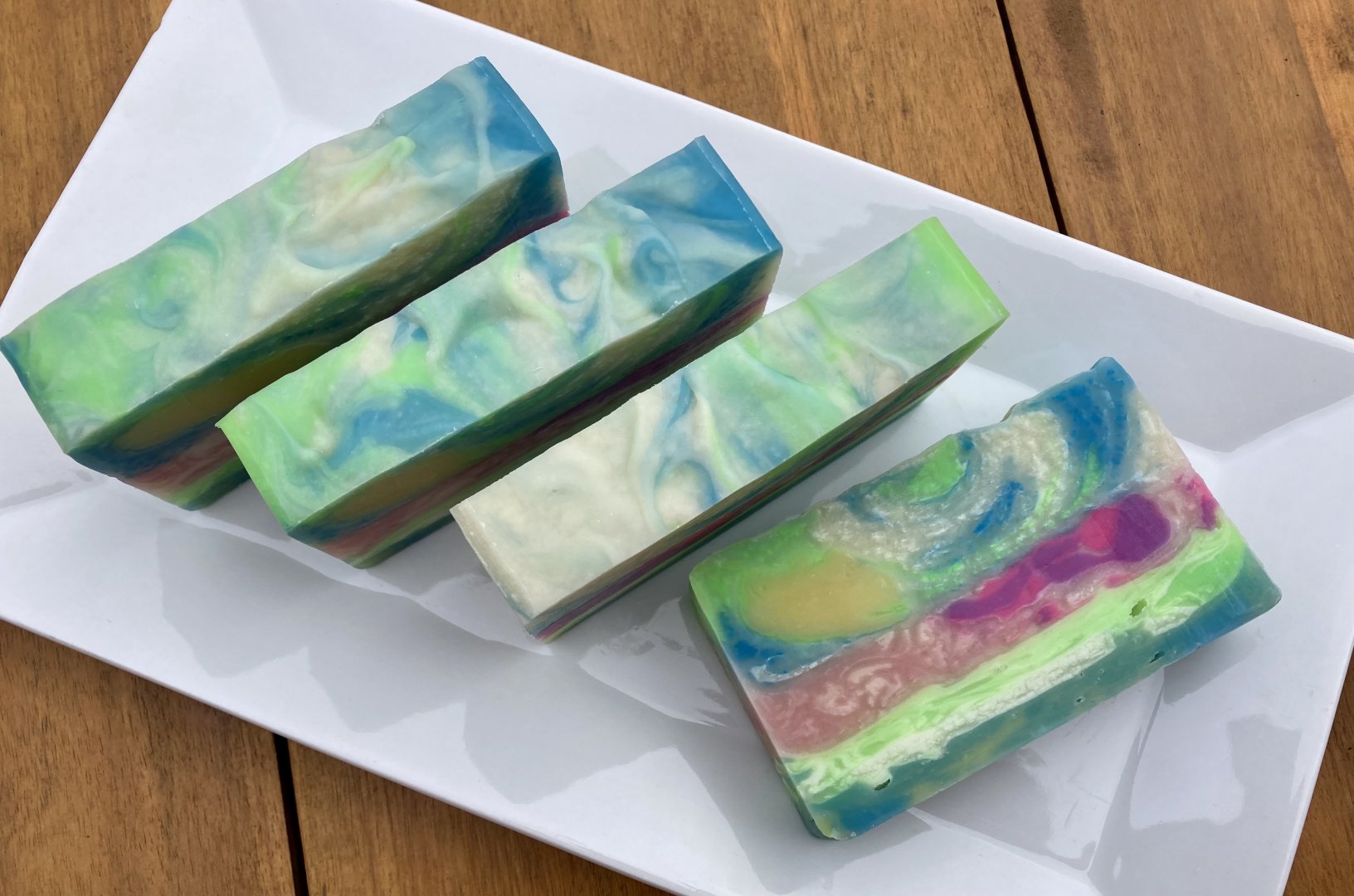 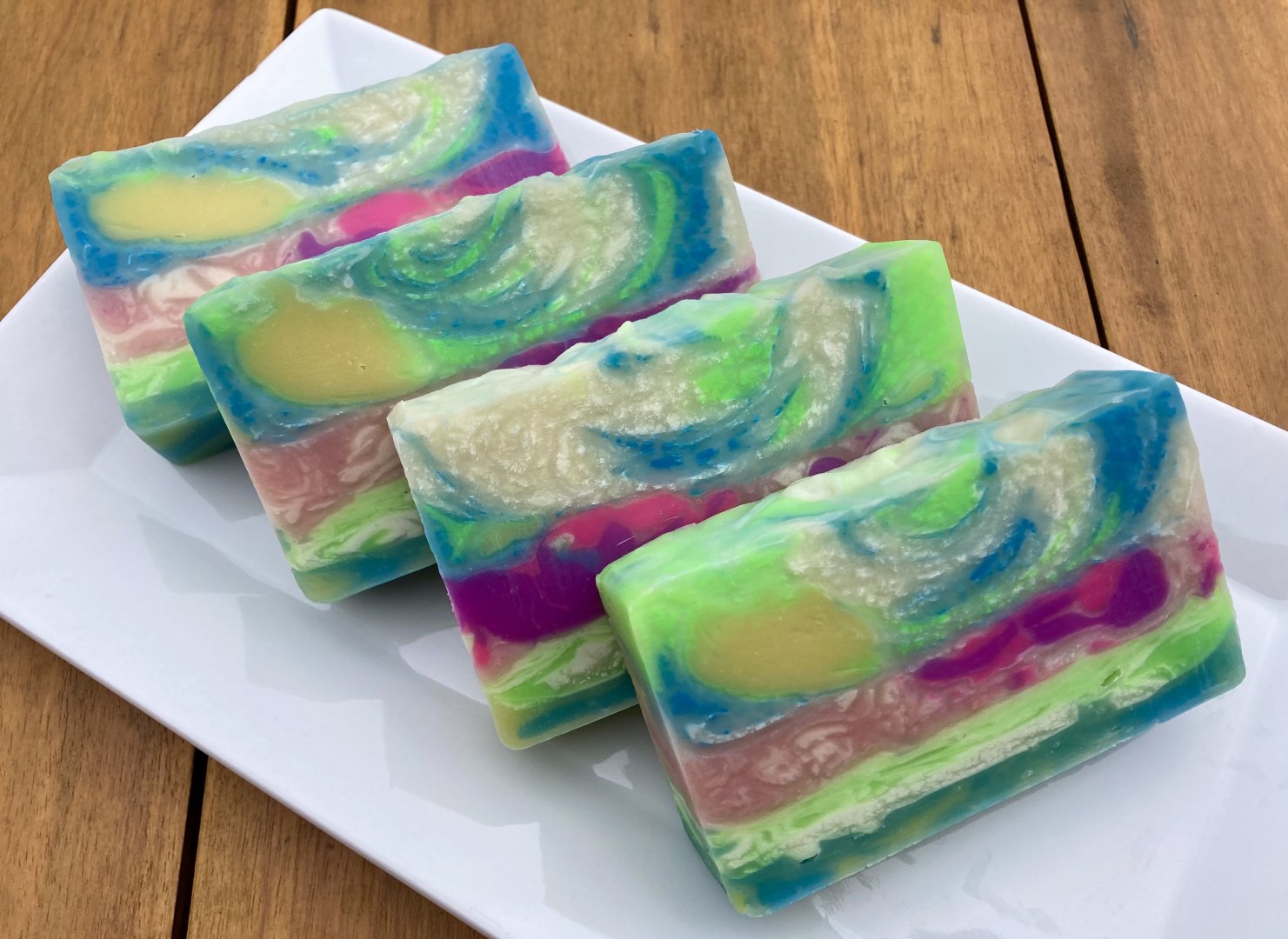 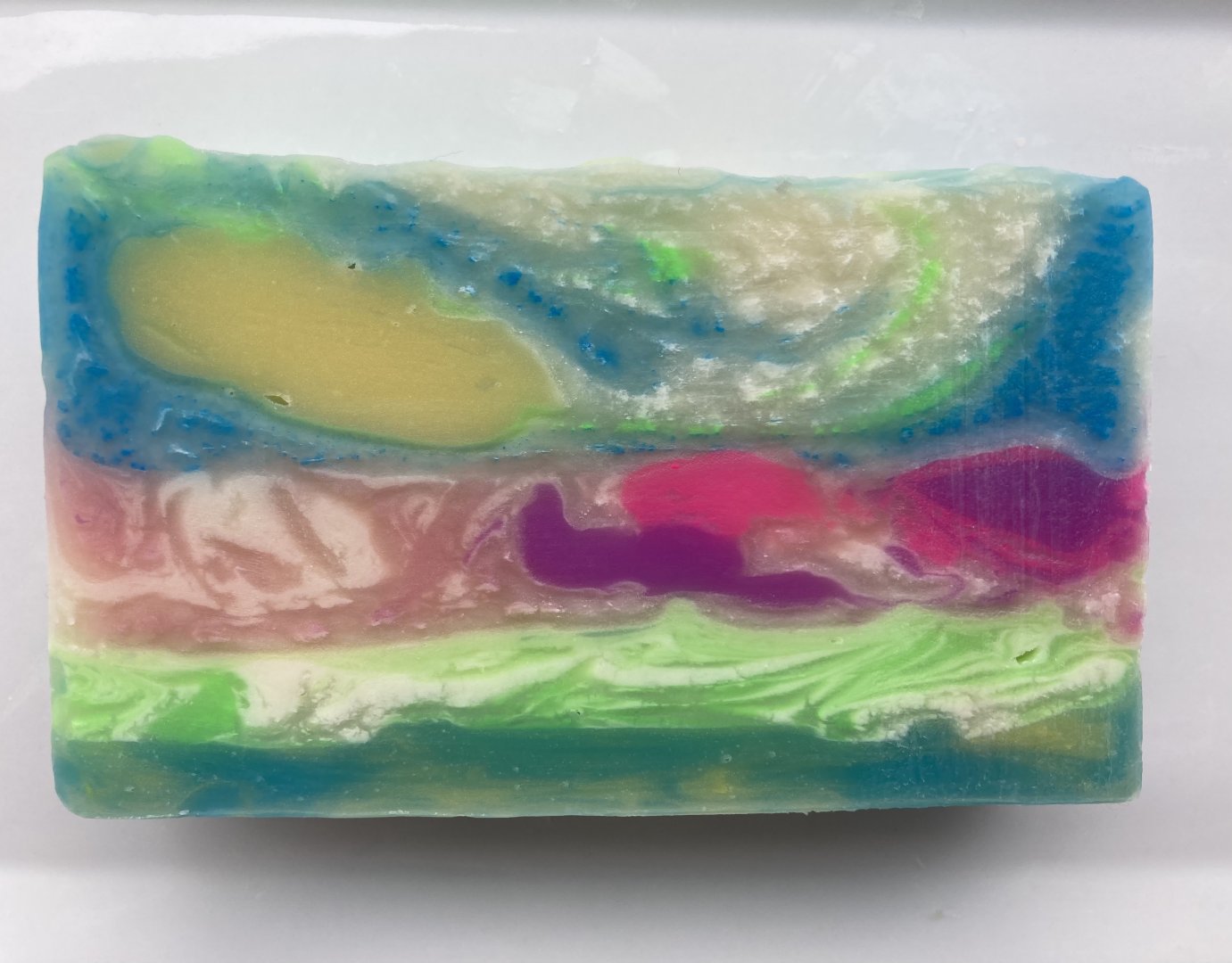 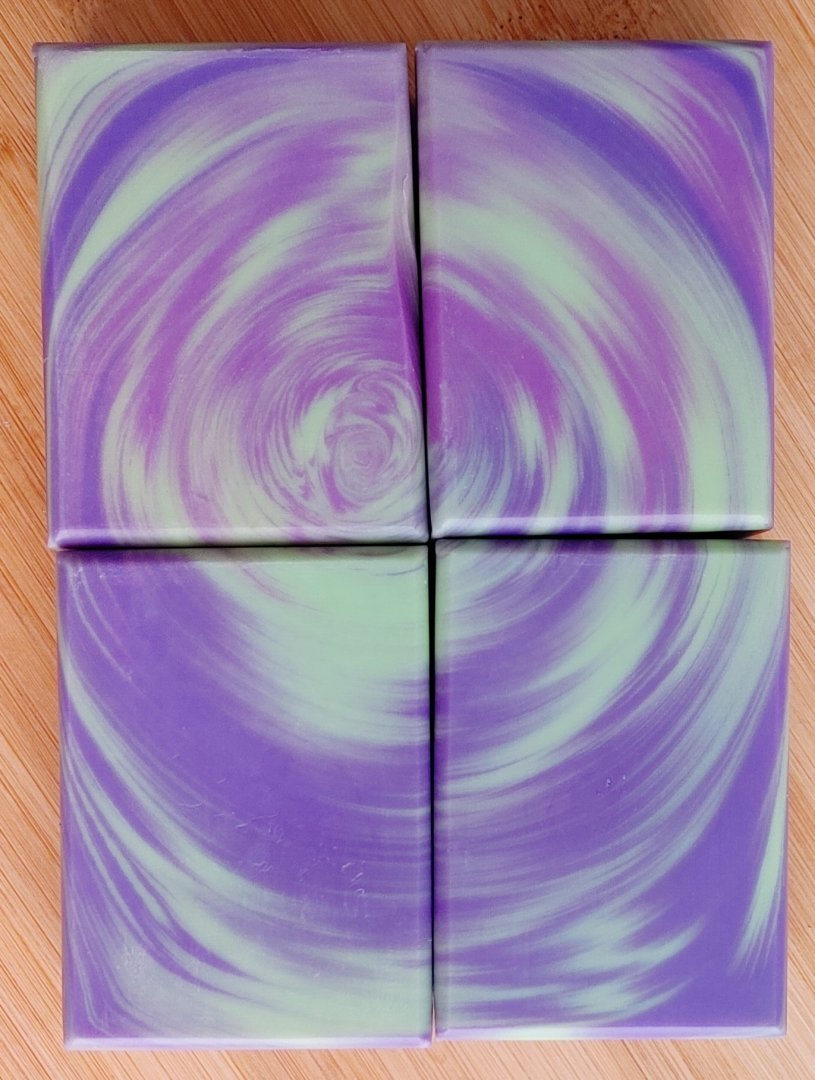 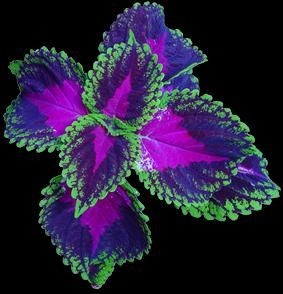 Slow-moving recipe, minimal use of stick blender, fluid batter, decelerating fragrance oil, and poured veeeeery slowly using pitchers with a pour spout. Focused more on pouring from the center of the mold with accents at at the corners. 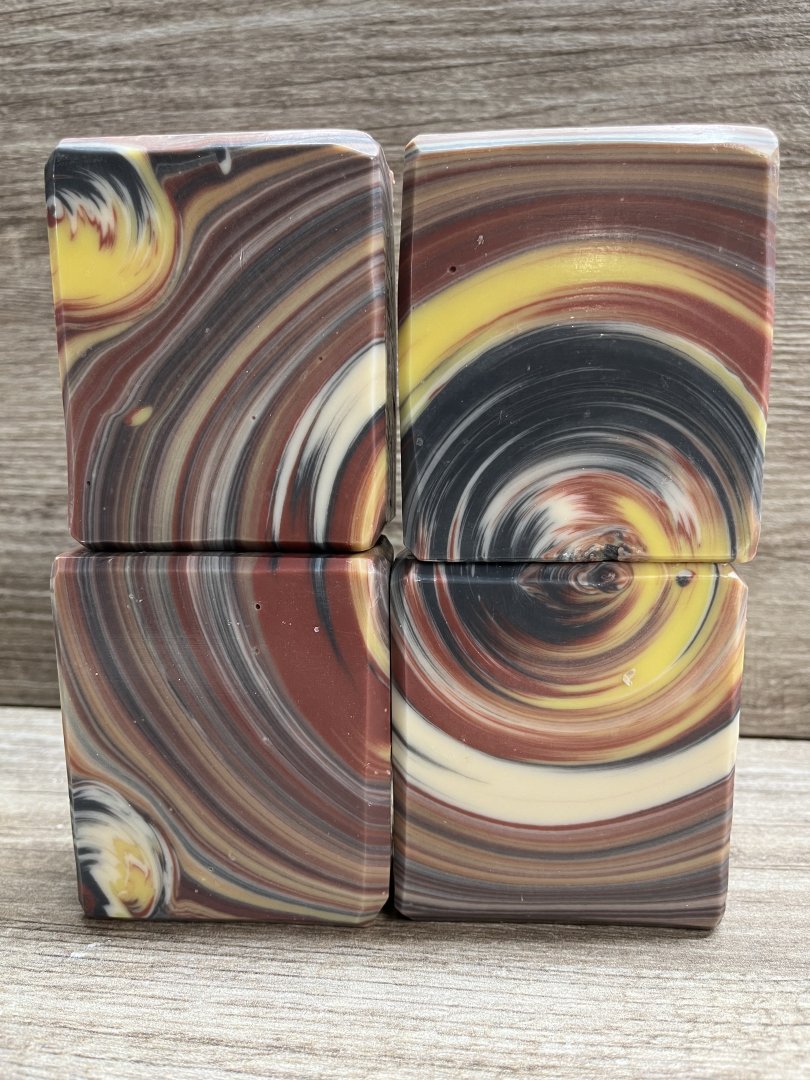 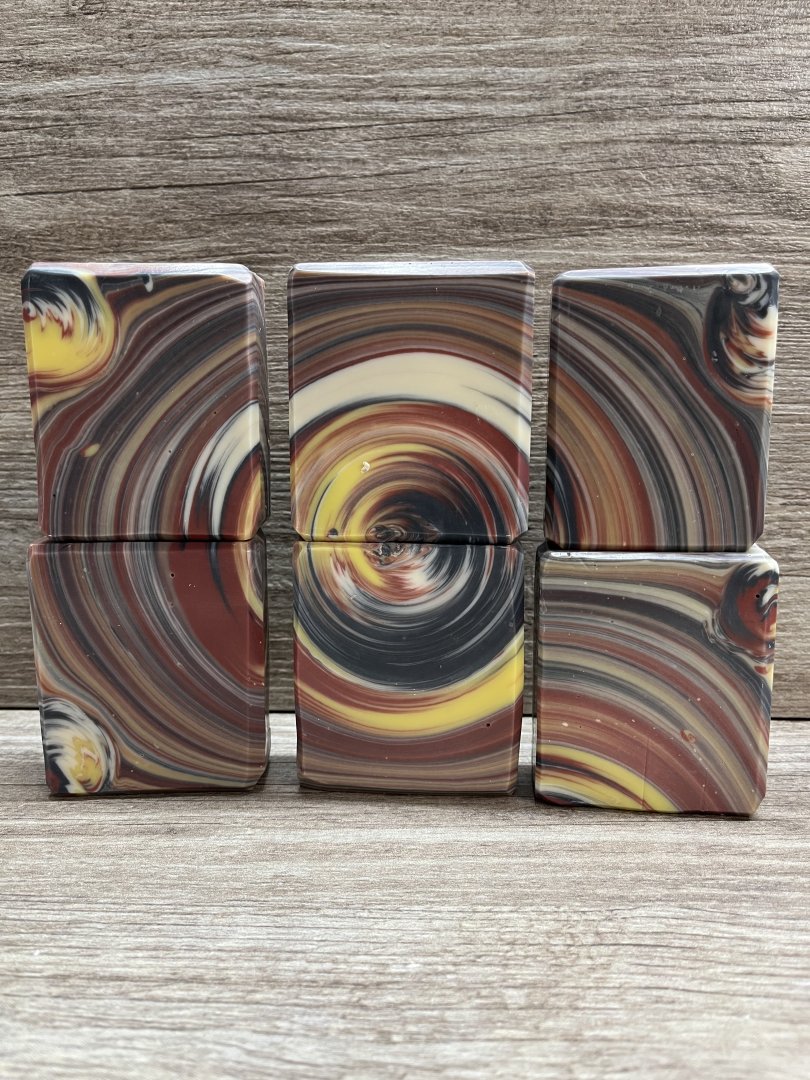 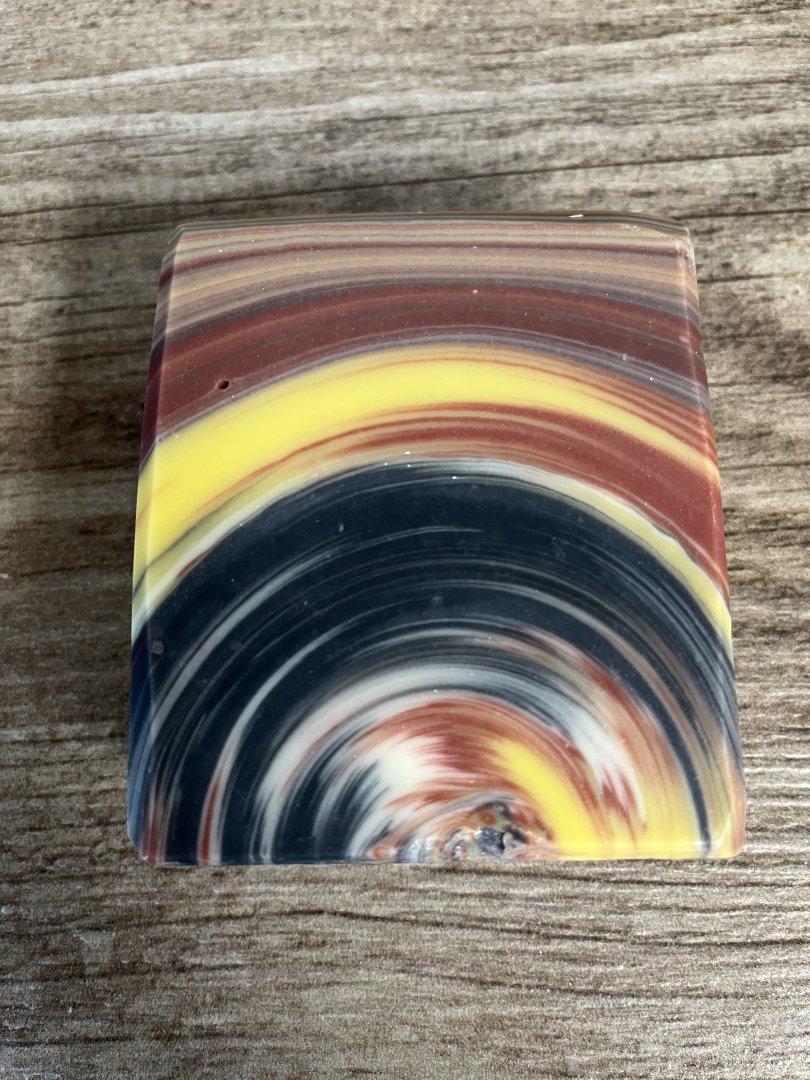 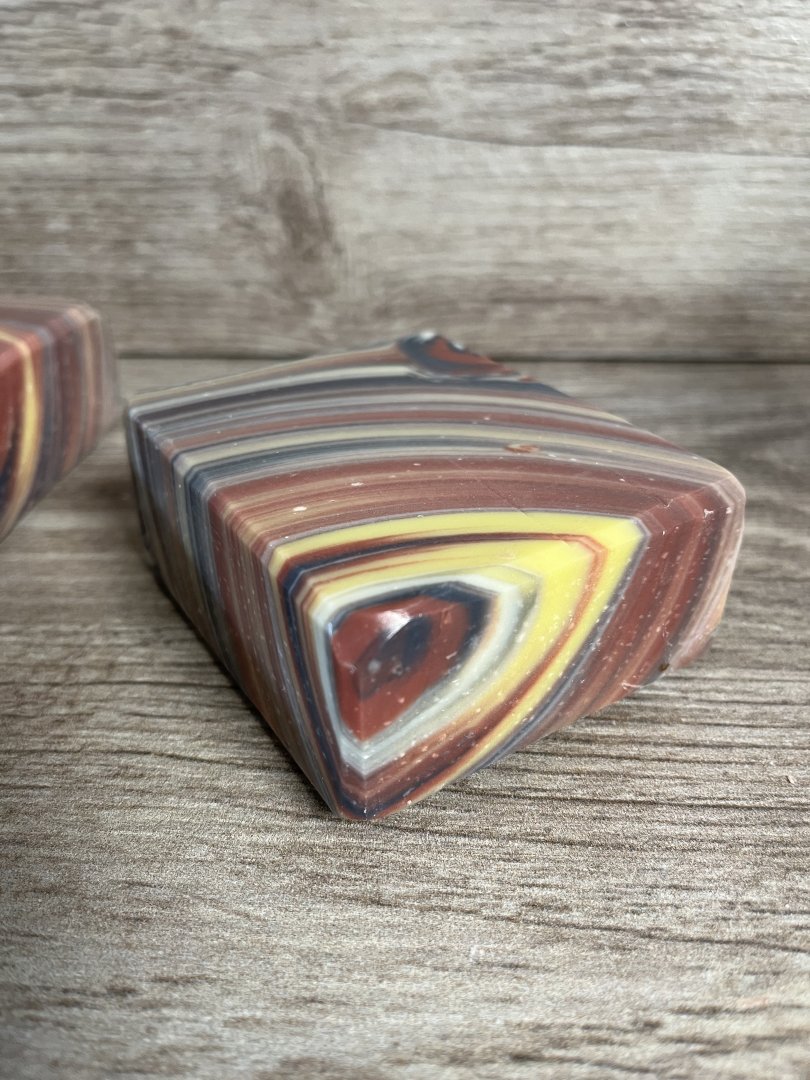 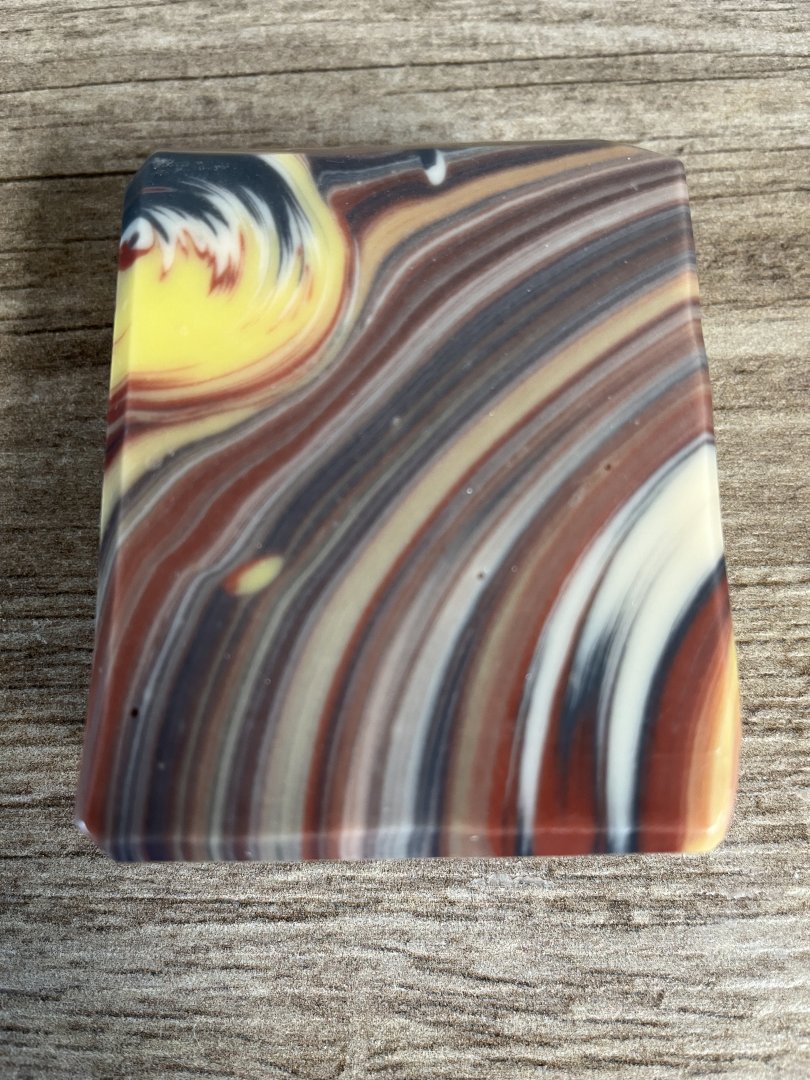 Please remember this thread is for entries only. Post any comments in the general challenge thread. Thank you - it helps us so much.

After two attempts with batter that traced a little bit too fast due to the FOs, this batter scented with eucalyptus and mint eos wasn’t thick enough. I also used two shades of blue that are hard to tell apart. I have no idea how I ended up with so much white in the middle 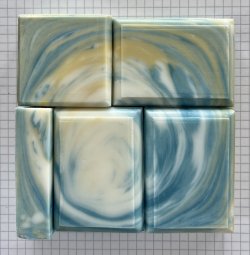 I did a traveling kiss. This was my second attempt, my first one thickened too fast with 34% ish lye water concentration and Nurture soap Bergamot and Honey Fo (which had behaved well before). So this one I left the lye concentration at 40% and tried Love spell from Aztec candle instead. The colors were inspired by a face painting split cake I like. I had the four colors in a divided cup, and two colors in the second cup, if you can call them that: black and white, for contrast. These three were my favorite: 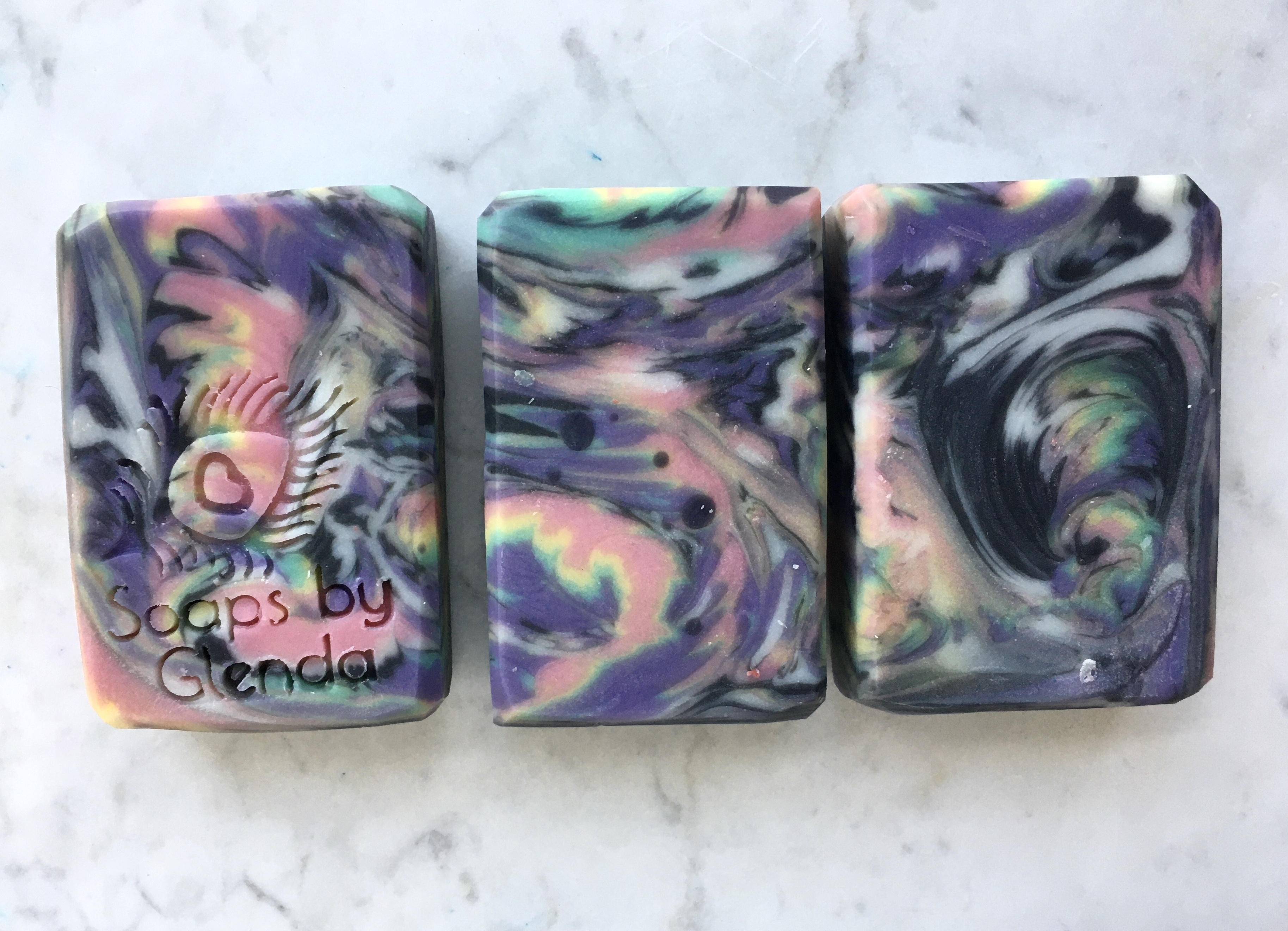 And the complete slab: 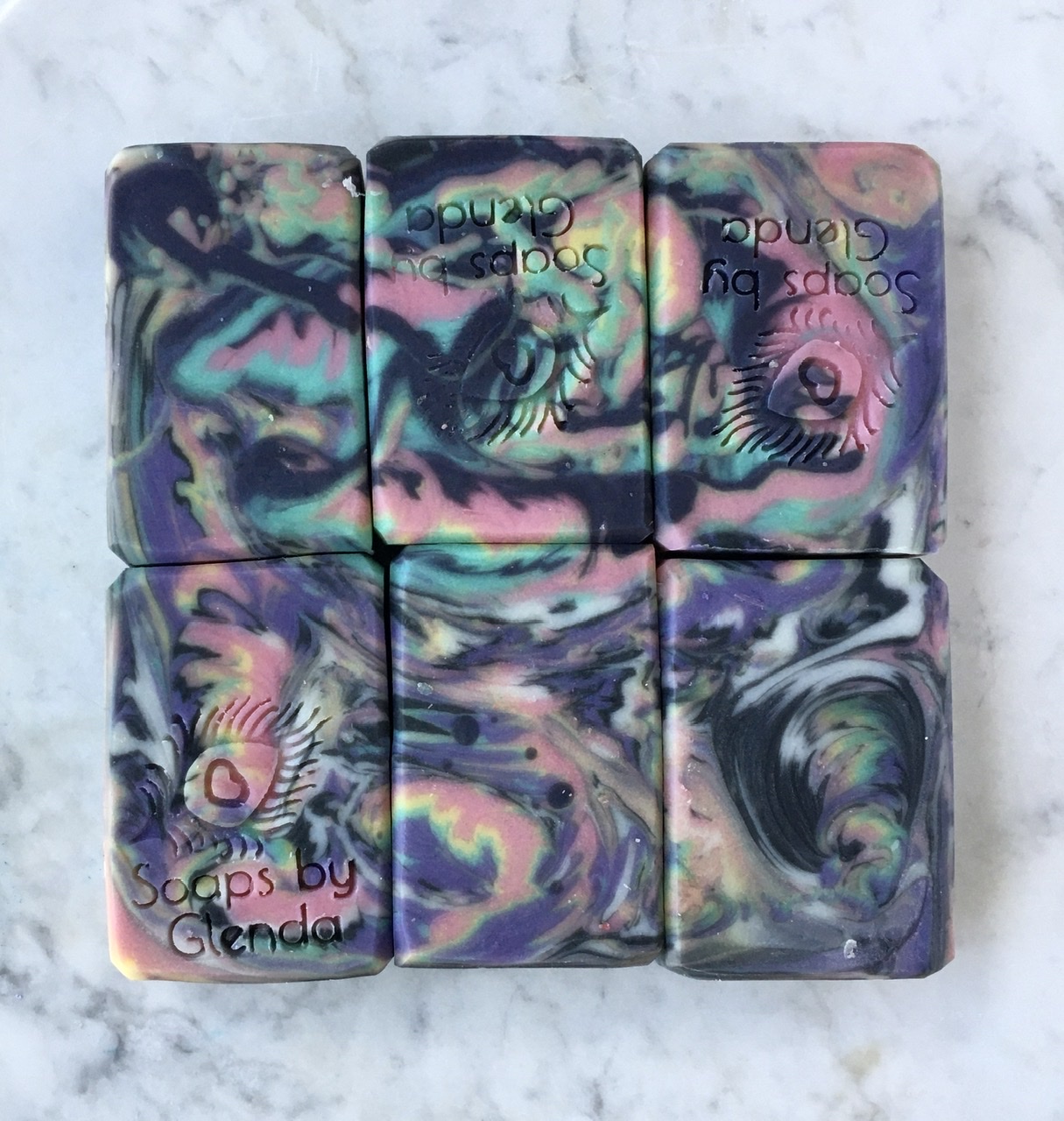 I did a traveling pour on this attempt. The first picture shows the best feathering. The last picture is the bottom of the slab. I thought I had a picture of the whole top, but not sure where it disappeared to 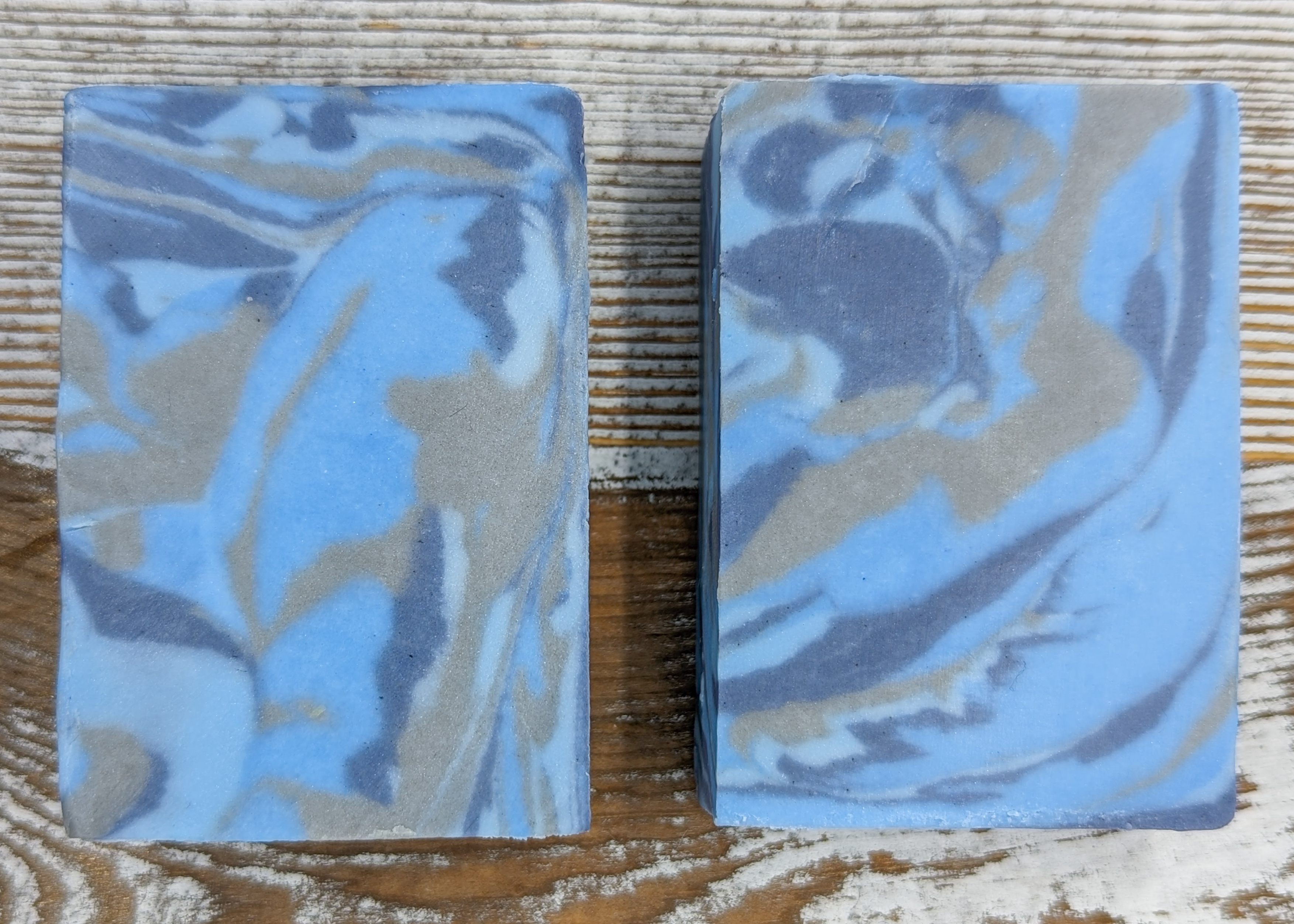 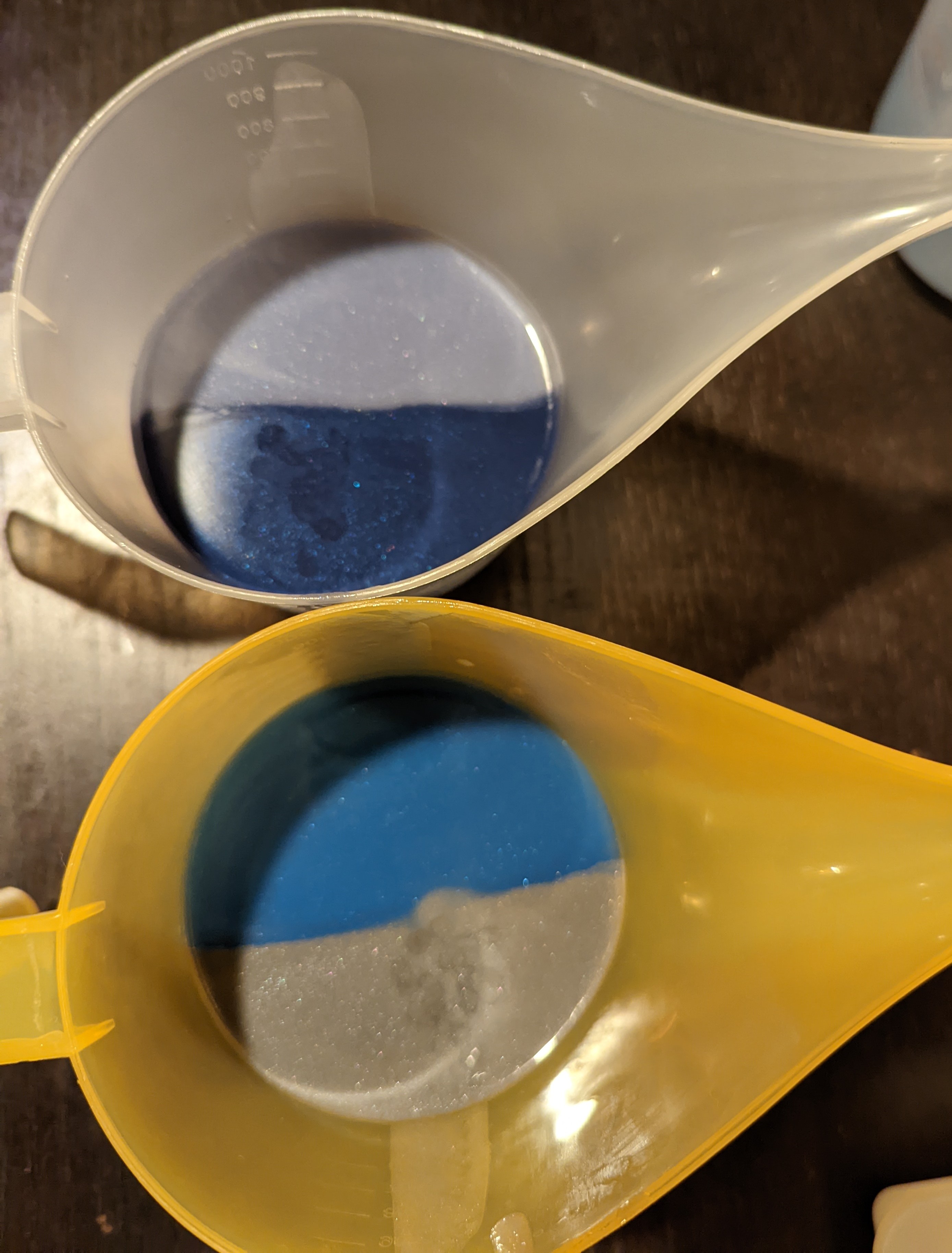 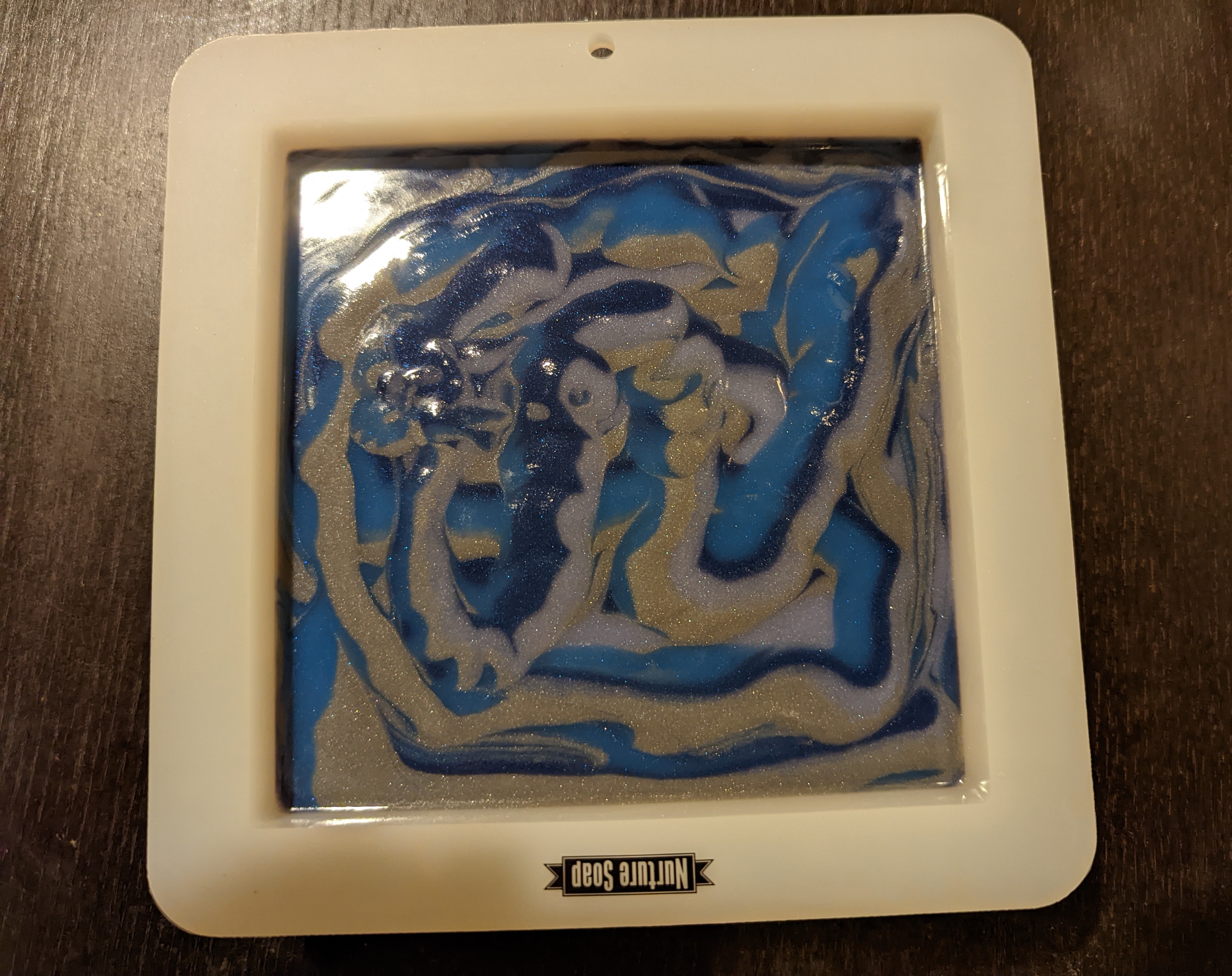 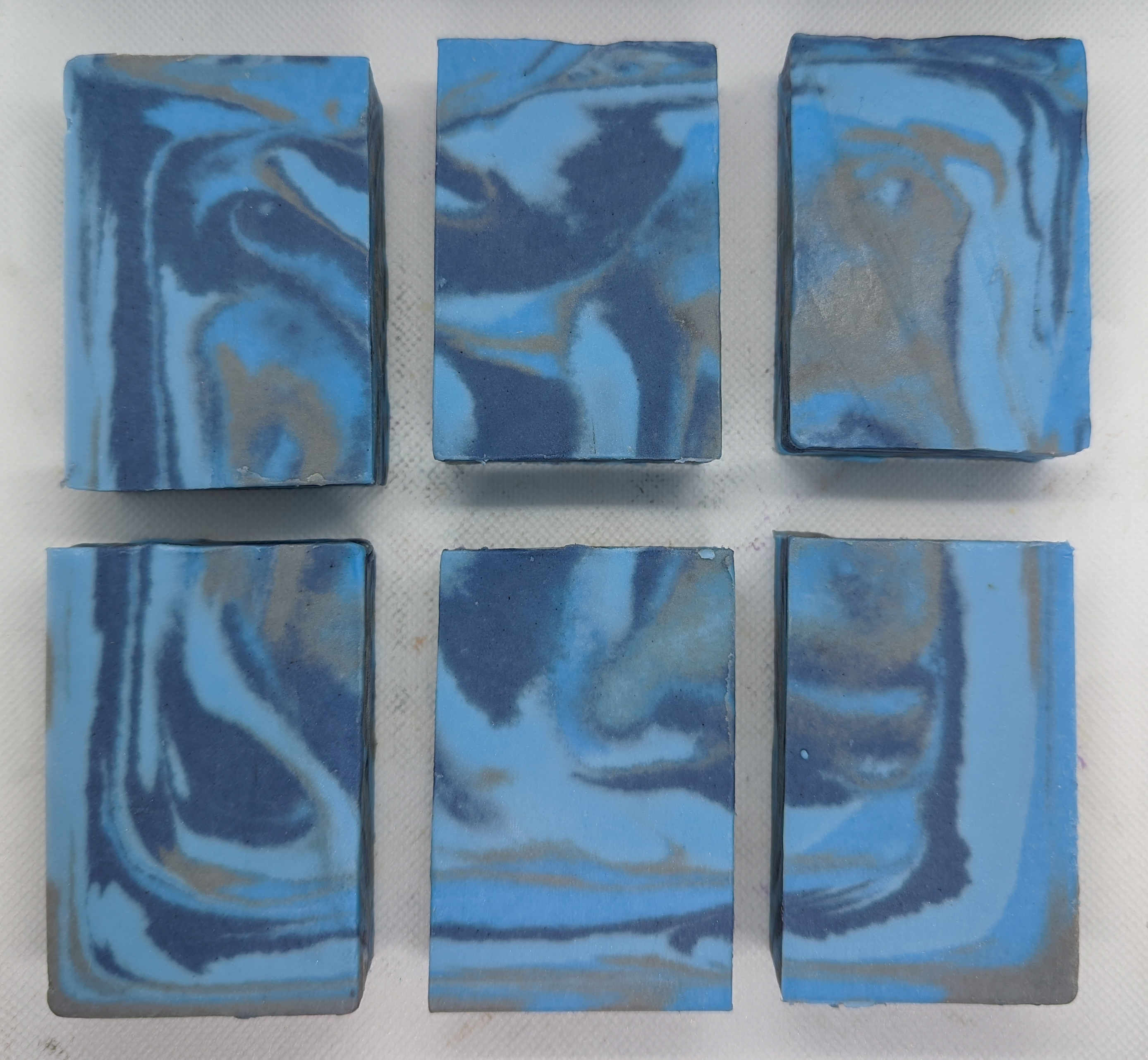 The entry thread is closed. Messages will be sent to all who signed up as soon as I get the survey ready. Good luck voting - the entries are beautiful!

The votes are in!
tied for first place is gardengeek and The_Phoenix
second place is VikingChick
third place glendam

Congratulations! Thanks to everyone who participated. This isn't an easy technique and you all made lovely soaps!

Oh * my * gosh! Thank you everyone!
Congratulations to all the winners!!

And thank you @dibbles for hosting another great learning experience!

wow, congrats all- such beautiful entries.

Thanks y’all! And thanks again to @dibbles for a fun challenge!

Woot! Well done to the winners. Thanks Dibbles for the challenging challenge. I would take notes for next time, but I'm not going to try that again.

Congratulations to all winners and participants. Lovely soaps.