Well another experiment took place a week ago, and made three bars with the following recipe:

I had an accident though that only the look of the soaps were affected, and as you can see one bar of the control soap and all 5 bars of the SC soaps have this rustic look.

As I realized that the 4% SC made a softer soap bar after 2 days of curing (maybe 4% is too much or SC tends to soften the soap's hardness), I put the specific rustic bars in the oven while being warm (~65°C) and not in use thinking that I could try and make them a bit harder with the help of some heat. My wife then wanted to cook something, but I didn't had the time to inform her about the soaps, so she turn the oven on to 200°C when after a few minutes I heard her shouting! The soaps were immediately taken out of the oven while the plastic tray was starting to morphing, and the bars went through the gel phase one more time (I had them CPOPed in the first place).

They were so soft like jellies but after cooling outside they became the soap bars they used to be regarding hardness. The SC soaps though are still softer than the other two.

Recently Teresa posted her thoughts on how the soap felt between these 2 additives so I'll be interested to hear what you think. Thanks for posting, ngian!

Heating them so high totally changes the soap. I accidentally did that to one batch and had to throw them out.

It was only for a few minutes and just before reaching 200°C.

They just melt as they gelled and lost their initial shape.

The white (control) that was in the oven is now just like the other 4 control soap bars that weren't in the oven, regarding texture and hardness, so I guess the same is for the sc soap bars.

This is where I got my amounts, if you are wondering. I don't know if you have seen this before (it's from a post by DeeAnna). I made a screen shot of this and literally take it where ever I go. (It's on my phone and saved to my cloud.)

BTW: The colors for the EDTA and SC soaps are beautiful. What did you use to get them? 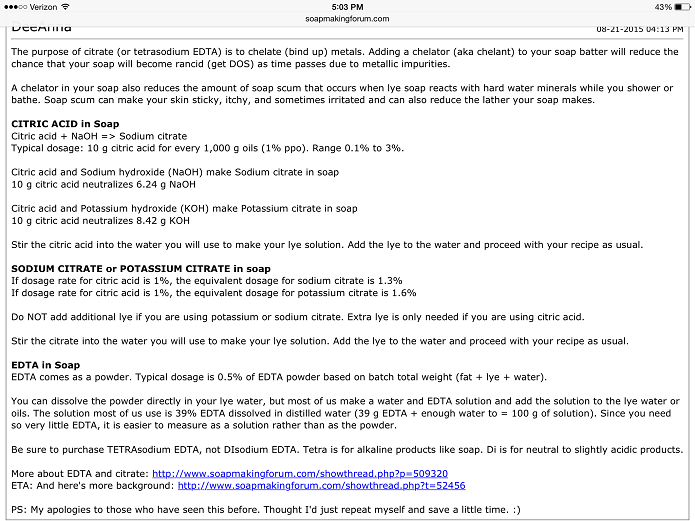 Use of Tetrasodium EDTA in cosmetic formulations

This is where I got my amounts, if you are wondering. I don't know if you have seen this before (it's from a post by DeeAnna). I made a screen shot of this and literally take it where ever I go. (It's on my phone and saved to my cloud.)

BTW: The colors for the EDTA and SC soaps are beautiful. What did you use to get them?
Click to expand...

I have also as a reference DeeAnna's notes but straight from her site (which are updated from time to time): http://classicbells.com/soap/citricAcid.html

I have used many times 4% SC but I was also using salt at 2-3%, and now that I'm using only SC it seems that it makes a softer soap initially.

Hello everyone. I finally found some time to test the specific soap bars while I also got feedback from another soaper too.

We both agree that the white soap that has no "binding metal ions" additives has suds that somehow feel more "heavy" on the touch. It is like when the soap has more lye discount, and that must be for the fact that lime soap (soap scum) behaves somehow like fatty acids, ingredients that are hating water.

On the other hand the other two had "lighter feeling" suds, and as others have described (IrishLass or Teresa), the skin is feeling a little bit more cleaned and lighter. They can also create a few bigger bubbles.

In the EDTA soap with only 0.5% of oils weight this effect is slightly more intense than the CA 4% of oils weight soap bar, So if someone wants to use more biodegradable ingredients, he can use CA instead of EDTA with the similar effect.