Does coconut oil get rancid?

This just occurred to me as I have re-taken up trying to make pretty, scented soaps. I looked at my unopened gallon jug of CO and it says best by 05/2019! All my other oils are fresh, and my shea butter has been kept in the freezer. It just never occured to me to do anything with the CO but leave it under the counter, winter and summer! (no a/c in my house, gets to 85F sometimes). Oh and my lard is home-rendered from probably 2018, but has been in the fridge. It doesn't smell bad..... but perhaps I should not make lardy soaps for Christmas gifts this year?!

If it doesn't smell off it should be okay for the CO. Lard, not sure on. It's been in the fridge but could still go rancid. I'd make small batch and see but I don't think I'd give it away to people.
G

Coconut oil absolutely does get rancid, it's one of those things I keep in my pantry and use when I remember it exists (I use different supplies for cooking and soaping). If the color is uniform and it smells ok, it's probably fine though. I'll let people who know things chime in on the lard.

We have never had CO go rancid. It always melts in the summer here, too. We used to use it as a spread on toast (started after FIL was diagosed with Alzheimer's), but not much else, so it hung around here a long time before I stated using it in soap.

Yeah...... I think I'll just go buy new supplies for the Christmas gifts! I can use up my old oils making soaps for myself. I bring my own soap to work (I have a very dirty job and wash my hands several times a day, great for using up things I don't really like/want in my shower!) so rancid soaps wouldn't matter much. I reeeeally don't want to waste money for FO's for Christmas that are going to get DOS or smell bad in a month though!
Last edited: Sep 24, 2020

Back in the day (100 years ago), coconut oil went rancid faster than other fats, because of how it was harvested and processed. Nowadays it's one of the longer lived fats. That said, it's still a fat and still subject to the natural chemical processes of oxidation and rancidity.

Personally I use the "best by" date as an advisory -- food doesn't instantly go bad after its "best by" date. Your nose and eyes will tell you if the coconut oil and lard are fine or not.

My nose is somewhat untrustworthy due to that same very dirty job - I breathe in a LOT of very fine dust all day long and my sinuses are pretty much clogged 24/7. It's hard to smell things that are not very strong, for me, now.

I very much appreciate the replies!!

"Best Buy" is often used as a marketing gimmick...the whole 'peak of freshness' which encourages consumers to hurry up and use it, and buy more. The back of my fridge is pretty cold and I can keep milk in it a good two weeks past it's 'best buy' date with now issue.

General rule of thumb for CO is 18 months so it's going to depend when you actually bought it. Also it is unopened and been kept in the cupboard which means that it hasn't been exposed to the air or to light which contributes to the breakdown thereof. But the only way to tell for sure is to open the jug and smell it, and pour it into a glass cup and check for clarity.

I wouldn't use the lard, I'd just toss it.

Yes, I know about the marketing gimmick. But a best buy date in mid-2019 means I bought it in 2018 at the latest and possibly as far back as early 2017, when I heavily got into soap making and went all gung-ho buying supplies. I'll use it for myself only.

Lard has been tossed! I took it out and looked at the mason jar and it had swirls of yellow, so uh, no thanks!

Honestly I had a 5 gallon bucket of Coconut Oil that I forgot I had. It was in my back bedroom for 2 years and then I found it. I thought for sure it was bad but when I opened it the oil was just fine. It didn't smell differently or anything and it soaped just fine. Now I didn't taste it so it's possible it didn't taste right but it sure didn't seem rancid at all.

Speaking of lard.... I home rendered some a couple of months ago. I packed most of it into the freezer but kept some out to use....didn't get around to it immediately, but this it what it looked like after about 4 weeks in the butter compartment of fridge. 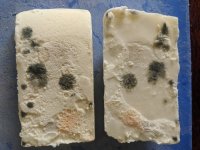 What do you all think about freezing oils, like palm, tallow, coconut, lard, etc? Or even liquid oils. I have frozen them all with good success. I have purchased 50# containers of tallow, palm and coconut oils, separated them into gallon ziploc bags and frozen them (also have heard that if the freezer is full it is more energy efficient. don't know if this is true). 50# would last me several years (I don't buy in those quantities any more). Also, if it is winter (I live in Minnesota) I separate into 1 gallon ziplics and store them on a shelf in the garage. Is there a downside to freezing them for that long?

I've read that virgin coconut oil can last nearly indefinitely. Not sure if that's true or not, but I've never come across coconut oil that has gone bad (to my nose, that is), whereas I have thrown away more other oils than I care to think about.
M

Malleebird said:
Speaking of lard.... I home rendered some a couple of months ago. I packed most of it into the freezer but kept some out to use....didn't get around to it immediately, but this it what it looked like after about 4 weeks in the butter compartment of fridge.

I'm pretty sure that's because when you home render lard or tallow it is really hard to filter out all of the impurities (i.e.: particles of the non-fat organic stuff that can grow mold).

Wondering what I could have done differently then with the lard ? I'd strained it through a double layer of muslin and it was pure white...no visible sign of any impurities.
Lard was purchased fresh from the outlet of a big abattoir...so was very clean. Maybe I just kept it too long ?
Should I have added ROE to it ?
Has anyone else had this happen ?

If the fat is clean and dry -- very dry ... did I mention DRY? -- it cannot support the growth of mold. It's my guess there was water present in this fat.

If the mold is only present on the top, then you covered the jar while the fat was still warm and residual moisture condensed on the top of the fat. But that's not the only place water can be found in rendered fat, whether you use a dry or wet method for rendering. Water can be present in the bits of collagen and other impurities or distributed throughout the fat in tiny droplets. Any of this moisture can cause mold growth.

Not only do you have to carefully strain the fat to remove collagen and other impurities, you also have to heat the fat until all crackling stops to ensure all of the water is removed.

Because I cannot render and hydrogenate my lard like a commercial company can, I always add ROE to the warm freshly-rendered fat. The commercial producers also add preservatives (I think it's BHT or a related preservative) to guard against microbial growth, so I suppose a person could add something like that too, but I don't. I do refrigerate my home rendered lard.

ROE is not a microbial preservative. In other words, ROE does not protect against mold growth. It's an antioxidant that acts as insurance against rancidity. The presence of water and impurities will not only cause microbial growth, but they will also accelerate the onset of rancidity. That's another reason to get your fat super dry and clean.
Last edited: Sep 26, 2020

Malleebird said:
Lard was purchased fresh from the outlet of a big abattoir...so was very clean. Maybe I just kept it too long ?
Click to expand...

Mine was in the fridge for over two years, and there was a partial of another jar that was probably 4 years old, still pure white. I used that one in a test soap (for myself only!). My other, two-year lard was yellower, I assumed it was because I cooked it too long. I had two jars of that one, one was only deep yellow in the center mass, the other had yellow swirls throughout after two years. But they both started out more yellow than the first rendering. I also wondered if my brother could have just fed his pigs differently or something for the second batch.

DeeAnna said:
Not only do you have to carefully strain the fat to remove collagen and other impurities, you also have to heat the fat until all crackling stops to ensure all of the water is removed.
Click to expand...

Thanks DeeAnna, yes it sounds like water must have been the problem. So you're saying after I strain it I must reheat again until the crackling stops ie. any water remaining evaporates ?

What I did was....after straining, pour it into a big lined tray and put it in the freezer until it was firm enough to cut into 250g blocks.... which I wrapped in cling film. (The jar sounds a much better idea !)
....but should I be re-heating these blocks I have in the freezer before I use them ?

Guspuppy said:
Mine was in the fridge for over two years, and there was a partial of another jar that was probably 4 years old, still pure white
Click to expand...

Wow.... 4 years in the fridge and still good. You got it right

I don't know that I'd feel the need to reheat the frozen lard before making it into soap. There is likely not a huge amount of water trapped in the fat, so it's not going to throw off your recipe, if that's what you're thinking about. If the fat is not moldy or otherwise objectionable, I'd just use it as-is.

I don't cover the pot when I render lard. (If you do cover the pot, you'll learn there's more water in raw fat than you might expect -- there will be water condensation on the inside of the lid even if you're dry rendering.) I normally use a dry render process if the lard is "sweet" (freshly collected and not smelly).

After the initial rendering and straining is done, I heat the fat on the stove top to a bit over 100 C / 212 F. That will cause any water in the fat will boil and turn into steam. I don't walk away when doing this process for safety's sake. I also don't let the fat get any much hotter than that to maintain the best quality of the fat.

The water-turning-into-steam makes a crackling sound and that's what I listen for. When the crackling sound stops (or pretty much almost stops), the lard is as dry as it's going to get. I strain the lard one more time, add ROE, and let it cool.

If I have room in the freezer, I'll freeze my home-rendered lard, but it usually ends up in the fridge. Sometimes, like during canning season, my fridge gets full too, so the lard might spend a week or two on the pantry shelf. When there's room in the fridge again, the lard goes back in.
You must log in or register to reply here.
Share:
Facebook Twitter Reddit Pinterest Tumblr WhatsApp Email Link