Well, my way too-interesting HP batch last night ended up pretty much okay, I think. The bars are a bit greasy on the outside but most of my last minute fragrance and superfat did absorb, whew! I HPOPd it because the batter was acting so wonky that I'm not sure I got a 'full cook' on it, and because of my oil puddles from adding SF & EOs way too late in the process. Sheesh! What a night!!

I ordered tallow but received leaf lard! Had to run my recipe through the calculator again when I discovered I got the wrong product! I didn't find leaf lard on SoapCalc, so I hope the SAP is the same for both kinds of lard. That was the first thing that went a bit wrong. Such a shame to soap with Leaf Lard, isn't it? I'm assuming it can be used, though?

Then, the bars seem to have glycerin rivers -- my first time, but I can't fathom why? I used less water than my last 2 HP batches, and no TD -- aren't too much water and/or TD the 2 things that cause this?

I had 3 first-time ingredients: Olive leaf powder, lard, and about 40% Aloe liquid in place of some of the lye water. I added the Aloe a minute after adding the lye water to the melted oils and stirring them, and it took FOREVER to come to trace! I thought I would burn out my SB. I was taking temps and at first it was only in the 140 F range. I raised the heat a bit and got it to the 150s. I raised it AGAIN and when I took the temp it had gotten to 210!! I removed the pot from the burner for a few minutes. I think it was around this time that the batter looked a little like ricing or something. Can Aloe liquid do that? Mine states: Natural Full Strength but has ascorbic acid and citric acid added as preservatives.

I swear, I had no idea if I'd made soap or simply a big mess in the kitchen! Colored the entire batter slightly with the olive leaf and separated out some to color with leftover AC mixture to which I added Eggplant purple mica. The batter had to be stuffed into the individual moulds, so I'm surprised that I managed any degree of swirl whatsoever! My soap is a familiar shade of grey ... seen this color here on SMF before, LOL. Hoping it morphs a bit. Nothing like washing with soap that looks dirty, is there? 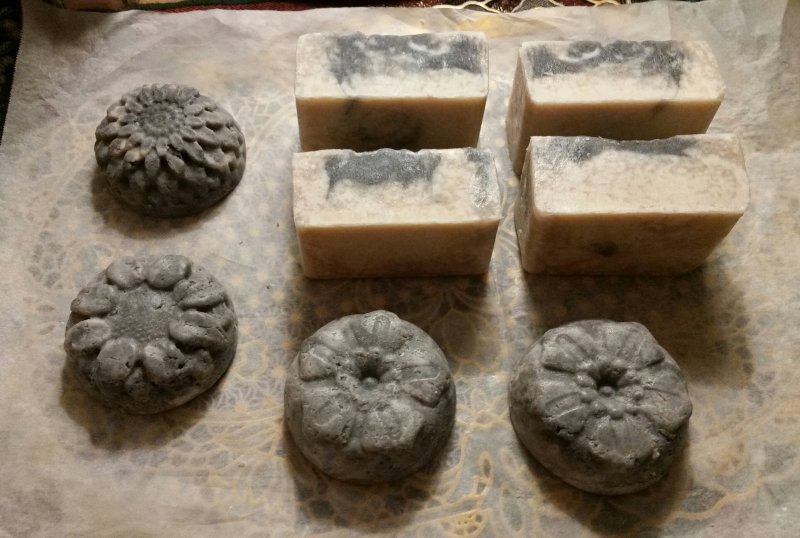 All things considered, they look pretty darn good! Higher heat for an extended period of time and cooling slowly can also cause glycerin rivers. I like them.