can the battery dying in scale effect accuracy?

two nights a go i made a facial soap with activated charcoal powder. i made 4lbs of soap and used 1 and a half tablespoons of charcoal powder. i used my handy digital kitchen scale to make sure everything was measured properly. i unmolded and cut the soap today and it seems a tad crumbly. i am not sure, but i think the scales battery might be dying... could it be possible that it weighed my ingredients inaccurately? you would think that this wouldn't be possible, since measurements are crucial in all recipes but i wasn't sure. please let me know if a dying battery could have affected the accuracy of my measurements. thank you!!
E

meganlanephotos said:
please let me know if a dying battery could have affected the accuracy of my measurements. thank you!!
Click to expand...

A US nickel weighs 5 grams if you need to check your scale's accuracy.
M

I just put a nickel on the scale to check it. It says '4g' not '5g.' Is this a minor enough difference though that it wouldn't mess a batch of soap up? Could the activated charcoal powder have been what made the soap a bit crumbly? This is the first time that I've used this in my soap. The soap itself wasn't overly crumbly..just the edges that were touching the loaf mold were. For instance, when I attempted to unmold the soap, the edges crumbled to pieces. I lost 2 pieces of soap because of it. I did grease the mold, but maybe not enough? This has never happened before.. But throughout the soap bars wasn't bad or crumbly..not that i can tell. does this sound like a lye heavy soap to you? I'm including a picture and recipe here for reference.

at trace: 12g anise EO and 15g peppermint EO. I separated the soap batch in half and added 1 and a half tablespoons of activated charcoal powder to only half of it. I then poured a thin layer of the white soap in mold, then a thin layer of black soap, then thin layer of white soap and so on. I swirled it with a long chop stick. I put it in freezer for 15 hours, then moved it to fridge for 4 hours and then left it on counter under a fan for 5 hours and unmolded and sliced it into bars. 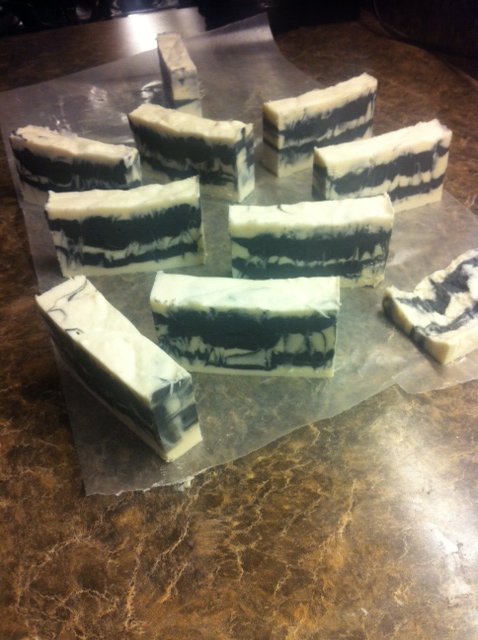 Well, 4 g is only 80% of 5 g. I don't know if every ounce would be off by that much, and if it was, so would the lye and water, if it was consistently off by 20%. I have never used charcoal so don't know if 1.5T in ~20 oz oils is the right amount or if that would cause the black portion to dry out and crumble. Soap is a funny beast, it does what it wants sometimes

This is timely, my scale was sluggish. Replaced the battery, and a nickel weighs 5g immediately. Thanks!!
S

I would collect a pile of nickels and check the weight again. The scale can't show you 4.85 grams, it's either 4 or 5. But if you have 10 or more nickels it will show you its accuracy more...accurately!

After a few days you can do a finger-to-mouth zap test to make sure it's not lye heavy. (this limits your owie risk more than touching your tongue straight to it.) Even if it does zap then, you can wait a little longer and see if it mellows out.

I'm concerned at your amount of Anise EO, that is a regulated EO I believe because of its methyl chavicol aka estragole
M

Soap_rat, I didn't know about the Anise EO being a regulated EO. I found a recipe for the activated charcoal soap on Soap Making Resource (http://www.soap-making-resource.com/charcoal-soap-recipe.html) and they actually said to use 50 grams of Anise EO and 25 grams of Peppermint EO. Those measurements were for a 5 pound batch. I only made a little less than 4 pounds, so I used less. I also used some different oils than the recipe had stated..but I of course re-ran it through the lye calc on SoapCalc.net. As I was measuring out the Anise and Peppermint EO, I thought it smelled a bit strong. My husband has a weak stomach and was actually gagging from the strength of the smell. That is another reason why I used only 12 grams of Anise, instead of 25g like the recipe stated. Plus 25g of it would have costed a fortune. I believe the EO I used is actually Anise Seed, not Anise.. which I was told by the health food store that it is a milder scent than the regular Anise. Is that correct?

I will collect a pile of nickels and put them on the scale this morning. I'm hoping the soap isn't lye heavy.. it looks and smells so pretty, I don't want it to be ruined. How many days after pouring into the mold should I zap test it? Usually I wait 5 days after pouring to zap test.. is that sufficient?

One last thing, if it turns out that this batch is indeed lye heavy..is there anything i can do to fix it? For instance, if I was to throw it in the crock pot and rebatch it...would this work? How would I know how much oils/butters to add to it to make it not lye heavy?

This is the reason my next scale will have an adapter so that I can plug it into the wall! I'm always skeptical about how much juice I have left in my batteries, so I end up changing them a lot. An adapter will save me money!
J

I generally use EO at 3% or less of my total oil weight. For a 5 lb recipe that would be roughly 60 grams total. Peppermint is also really potent and can cause a skin tingle so I keep it at a lower %.

You can calculate more or less how much your scale was off by weighing your entire batch and then comparing it to your original list of ingredients. There will be some disparity due to water evaporation. But it will give you a general idea. Your 4 grams on the scale could have been 4.1 grams or 4.8 grams, no way to tell other than weighing the lot and doing some math.

How to Make Soap - Soapmaking Guide for Beginners
2 3 4

Friday at 10:36 AM
CreativeWeirdo
C

Could this be lye crystals? Or...?