Anyone have a good process for making beer soap? I've seen various posts about boiling/reducing the beer ~50% (what's the reason for this, by the way?) but haven't found much beyond that. Does the beer replace the water in the lye mixture? Does it get added after the lye and oils are blended? Thanks in advance for help.

Beer is one of those tricky water replacements... maybe the most problematic. You want to remove as much alcohol and carbonation as possible otherwise the lye mixture can overheat or even volcano on you. Some folks like to make a reduction so that they can mix lye + 50% of water amount to dissolve the lye. You need to make sure you have at least an equal weight of water to lye to ensure the lye dissolves completely. Take special care as the lye solution is much more concentrated than usual.

Then you would add the lye solution to oils. Then add in your beer reduction which would be the other 50% of the normal water amount of your recipe. Be prepared as things can heat up and move fast. You will probably want to freeze or at least refrigerate your molded soap to prevent overheating.

I'm no expert at it... only having done it a couple of times. Hopefully someone with more experience will give you their tips.

Since this is on my to soap soon list....

Since it moves quickly--would you put any EO in at different time then trace?

Would you try and let the lye water cool more and soap at lower temp to help balance the heat that will be created?

I normally soap at room temperature or just a little above and always add my fragrance to my oils before my lye unless I need to keep a portion FO-free for coloring purposes. When I've done my beer soaps, I've definitely had things very cool and added the FO to my oils ahead of time. I like to exercise a bunch of caution/control over what I'm doing anyway, perhaps someone here has had good luck with a less regimental approach.

I don't boil my beer. I let it set out open 24 hours and then freeze it. Add the lye very slowly to the frozen beer, stirring between each addition. I strain my beer/lye solution to make sure that I don't have any undissolved lye in the solution.

Since your screen name is "scraggybeard" I'm guessing you're a guy ... and you probably drink beer cuz you want to make beer soap ... and so the answer should be obvious! If a little beer is good, isn't MORE beer better?

I've only done 1 beer soap, and then only used "near beer", so probably not the best advice giver. But it behaved like a lamb, so here's what I did, using the "split method" described by snappy above:

Reduced the beer from a bottle to about 5 oz (to eliminate any remaining alcohol and carbonation) and put it in the fridge to cool. My recipe called for 8.58 oz of liquid (I use aloe instead of water), in a batch that was 26 oz of oils. I used a 33% water/oil ratio, so slightly discounted water/liquid.

I put the lye into 4.58 oz of aloe, added the FO to the oils, let it sit for a few minutes, added the lye liquid to the oils, brought to emulsification and added the below (which was pre-mixed).

Mixed an oz of coconut milk powder, some EDTA, 1.5 TB of oats (mix of finely ground and colloidal) and 1.5 TB of honey warmed in a tiny bit of water in the remaining liquid amount, using the 4 oz of reduced beer. Added that mix at emulsification, brought to trace and then put it in the freezer, did not try to swirl or gel. I had no acceleration, I think I could have done a swirl, espec. if I had used full water.
Last edited: Jul 21, 2015
K

I recently made a large batch of beer soap for a swap on this forum. I still need to edit the video and put up a post on the making of it.

I reduced the beer i bought by 50%, but I did not let it boil. The reduction was mostly to drive off the alcohol, which I have read can cause soap on a stick. I then froze it in an ice try and used it as 100% of the liquid in a 2kg batch. I mixed the lye in with the frozen cubes a bit at a time, and let it come to room temp. It did not get super hot, one of the benefits of using ice.

I did strain it when I added the lye. It did not seem to move too fast. It did darken the batter - but while setting up the color lightened to light khaki. So if you want it to stay a dark brown you will need to add some brown oxide or cocoa powder.

All the feedback has been pretty good - tho I few were not as crazy about my fragrance as I was.

Here are some pics of what it looked like - 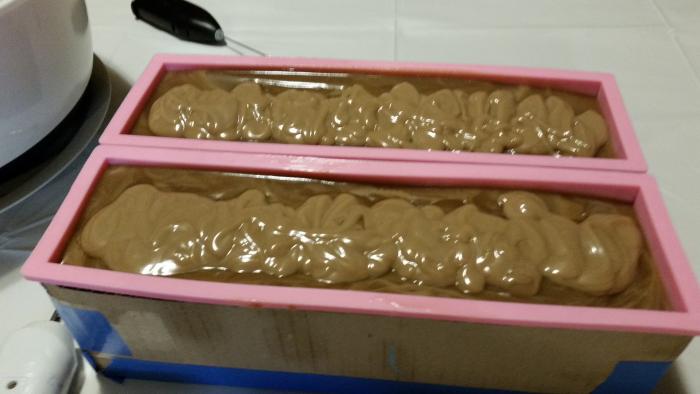 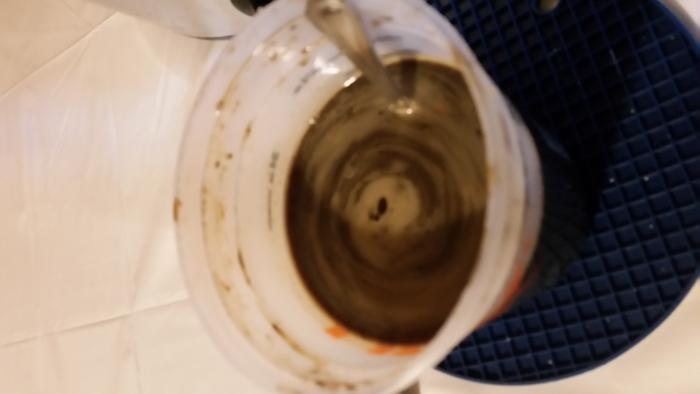 Another reason to boil it down is to get more of the beer goodness and scent in there. I used a whole big bottle of Arrogant Bastard in an unscented 2 lb batch, and it still smells hoppy and wonderful. Plus then you can do fun things with two toning it if you like:

I'm so pleased to see this post today! Yesterday my husband brought home some Guiness Stout and asked me to make him some more beer soap.

The first time I made beer soap I just let the beer sit out to get rid of the carbonation and then froze it. I am going to try using the reduction method this time and leave the batch unscented to see if any of the hoppy scent comes through in the finished soap.

Seawolfe, I love the pic of your soap. That's how I always imagined beer soap should look. My first attempt went well but didn't look half as good as yours.

Thank you for this thread! Hubs brews beer, so I plan to make a beer soap at some point, and most of my questions are now answered!
S

Thanks all for the replies! So if I have a batch that calls for ~20oz water for the lye mixture, I can use reduced beer for all ~20ozs? Seawolfe, I was thinking of adding some pellet hops to the soap to give it a hoppy smell - is that not necessary in your experience?

If you want. Just don't CPOP or insulate the soap and watch carefully for overheating especially in the first hour or so. Gelling is okay (at least for me and my soaps), but going past that and overheating is not. If you see any puffiness or the start of cracks on the top of the soap (assuming you're using a loaf or slab mold) then get a fan on it to cool it down.

You can use the beer for the whole amount, just keep an eye on things as you add the lye to it - maybe do it in the sink so if it starts to go badly at least it is confined to the sink. Of course, if it is well prepared and you add the lye slowly, there is no reason why it shouldn't go off with out any issues, but I would err on the side of caution

I have a freezer full of whole hops, but have yet to use them in soap. If you use a really hoppy APA and concentrate at least half of it down, the smell will stick in my experience. Just watch for acceleration

Edit to add: I would absolutely not add whole hops to the soap, they would go brown and look like mouse poop (like lavender does). Perhaps some on top might look cute, but expect them to go brown.

scraggybeard said:
Thanks all for the replies! So if I have a batch that calls for ~20oz water for the lye mixture, I can use reduced beer for all ~20ozs? Seawolfe, I was thinking of adding some pellet hops to the soap to give it a hoppy smell - is that not necessary in your experience?
Click to expand...

Whole hops doesn't go brown. We make a hop head soap made with beer from a local brewery.
N

houseofwool said:
Whole hops doesn't go brown. We make a hop head soap made with beer from a local brewery.
Click to expand...

Wow, that is super interesting, I thought almost all botanicals did. Good to know.
S

American Pale Ale - the craft breweries here are making IPA's (India Pale Ale) with crazy high hoppiness (and often alcohol levels). They still call them IPA's, but my first job was a pub in London, and those aint IPA's any more IMHO. In New Zealand they call them APA's and that makes more sense to me.

And really good to know about the hops not going brown! Though Im not sure what the leafyness would be like IN the soap as opposed to on top of it? Does it go scratchy in the soap?
H