I made some bath bombs for my baby shower coming up. I'm not very used to getting gifts so I felt a little bit better making some stuff for the people coming to my shower (work shower). But the bags I bought I thought had a wide bottom so I could fit a couple in there but they ended up being the size for cake pops. They only fit 1 ball that's 1.75 in diameter or 4 mini hearts. I also bought shrink wrap bands but after googling how to use the bands I found a thread on another forum where people talked about how their customers hated the balls that were shrink wrapped and should just put in baggies. So I didn't make any large balls (2.75 in). I put about 50 ball shaped bombs and about 45 heart shaped bombs in baggies. I made few more than that but I already gave some to a friend and tested some out for myself. Since they're all the small size I decided to use them as foot soak bombs instead of sit in a bath tub bomb. How many should I calculate per person? Do you think 2 bombs is enough for a foot soak?

I modified the basic recipes so they included 2 parts baking soda, 1 part citric acid, .5-1 part epsom salt, .5-1 part cornstarch, 1 tablespoon kaolin clay per 4 ounce baking soda, 1 tablespoon of coconut oil per 4 ounce of baking soda, 1.5 tsp of fragrance/essential oil per 4 ounce of baking soda, food coloring, and alcohol in a spray bottle to wet. I used wholesalesupplies bath bomb molds but ended up using 2 of the same side mold to get it circular without a huge saturn like ring and EOS lip balm shaped bomb. Fizzes and floats well! No cracks as long as I packed tightly enough. I initially tried using my silicon heart mold but no matter how long they sat in there, there was no getting it out without it breaking up. My chocolate mold baking tray worked a lot better for the heart shapes. 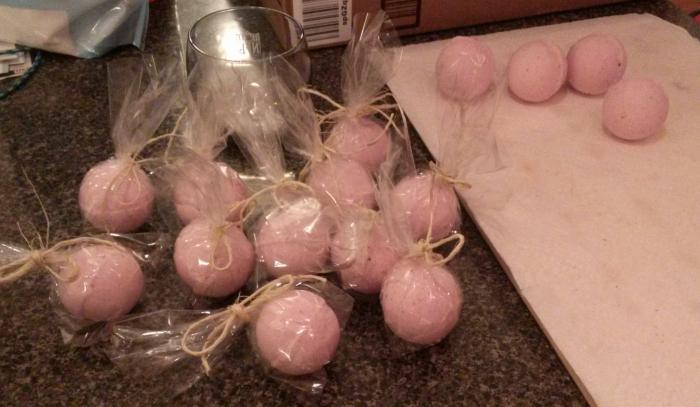 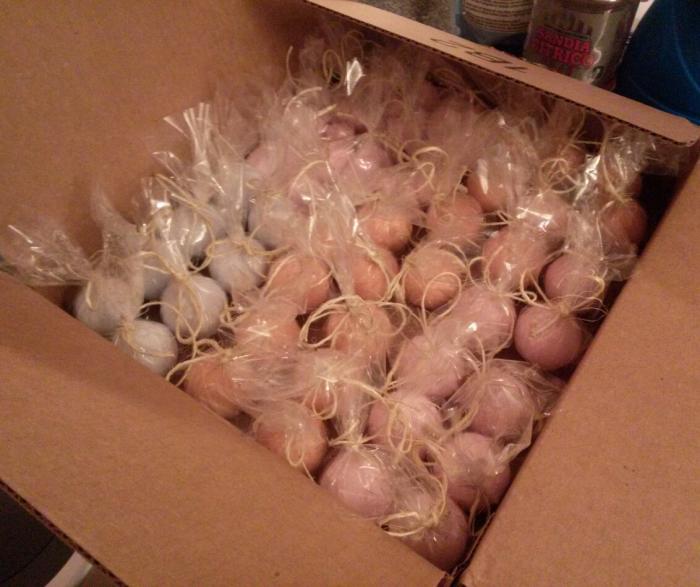 Those look very pretty! I think it's really thoughtful of you to give such a nice treat to the guests at your shower.

I do think that two will make a nice foot soak.
M

Yay thank you!! I used 3 of the mini hearts the other day and though it was fun seeing it fizz and float I was wondering what people would think b/c they dissolve so fast lol.
M

P.S. for anyone having problems of it fizzing from the food coloring/liquids, add the citric acid last! I put all my ingredients together, mix well with a whisk, then add the citric acid, and then whisk again. Then I mix by hand to get it a bit more well distributed and start spritzing with alcohol and mix until it's damp sand feeling. Then spritz more and mix whenever the bombs aren't sticking together/each half is staying in its own side of the mold.
M

Just wanted to mention, I had my baby shower today and everyone was very happy to get the bath bombs! We had less people at work than I counted for but that allowed people to grab 3-6 of them each lol.
M

Yay!! Thanks for the update. Your bath bombs are BEAUTIFUL. I've almost given up on them but you've given me hope- I'll try adding the citric acid last. What oil or butter do you use?
M

Mommy said:
Yay!! Thanks for the update. Your bath bombs are BEAUTIFUL. I've almost given up on them but you've given me hope- I'll try adding the citric acid last. What oil or butter do you use?
Click to expand...

Thank you!! I used Coconut oil At first I used jojoba, avocado, and shea butter melted but I found I needed to keep upping the oil. Then next batch I just used 2 tablespoons of coconut oil per 8 oz by weight of baking soda.

edit: When I told the guests it had coconut oil in it they were all ooo ahhh~ over them lol. Guess coconut oil benefits are getting well known. One coworker told me all the bajillion ways she uses coconut oil (cooking, hair, face, all body, etc)
You must log in or register to reply here.
Share:
Facebook Twitter Reddit Pinterest Tumblr WhatsApp Email Link