A few months ago, I packaged up some of my end pieces in baking sheets to try and keep their scents from mingling since I store them in the same box. A few weeks ago I noticed that some of them smelled off, but they appeared normal, so I just assumed that the fragrances were reacting with something in the coating of the paper. However, I looked at them again today and somw of them have developed DOS!

They were fully cured when I wrapped them, some even by many months. The packages were not air tight either (I'll attach a picture).

This has got me worried that the samples I recently packaged up to give out at some upcoming shows will also go bad. I packaged the samples in little glassine bags, though, instead of baking paper. Maybe they will be ok? 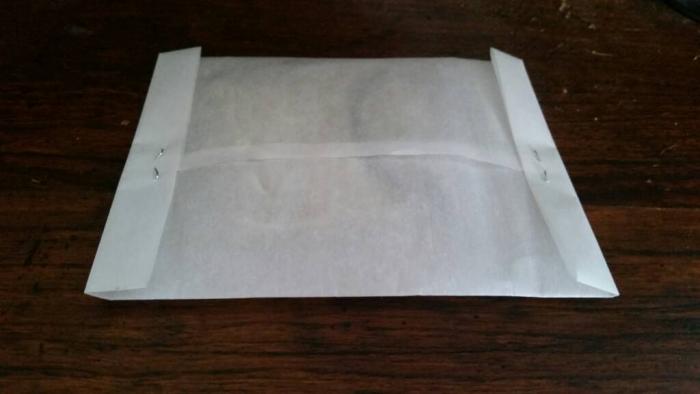 I wouldn't think the paper would cause DOS. Never know though. I store my samples in little zip bags and then in a plastic storage container and have never had an issue with that. Maybe too much moisture. High humidity? That's a bummer for sure.

I wouldn't have thought so either as I've heard of others storing soap in a similar manner. But this recipe has never given me problems with DOS and I've got bars that are over a year old. Then I package them up and suddenly multiple end cuts have DOS or smell off and the bars from the same batch are fine even in shrink wrap. I'm not entirely sure what to make of it other than the paper. Which is why I'm worried about the glassine wrapping :/

It sounds like that's the only factor that's different from your whole bars. I would change it up then. Such a waste.

I notice you have a staple on either end of the bag in your picture. I don't know for sure if that is the cause of your DOS or not, but I just make mention of it as a possibility since metals have been known to react with soap and end up causing DOS.

Hmm.. that's a good observation IL. I know soap reacts badly to metal, but it never crossed my mind that the staple may cause problems. I don't think the soaps come in contact with the staple though, as I think the staples cause the packaging to be too narrow around them, but I could be wrong.

Could it be something else in the baking paper that is causing discoloration -- an ingredient in the coating on the paper? It's kind of hard to make any more guesses without seeing the soap ... just thinking a'loud here.

Sorry. I didnt think to post a picture. Here's one of them. The spot on the bottom could very well go with Irish Lass's theory about the staple, but there also appears to be a very faint spot appearing in the upper left quarter about half an inch down from the top. I'm not sure if it's visible on the picture, however. 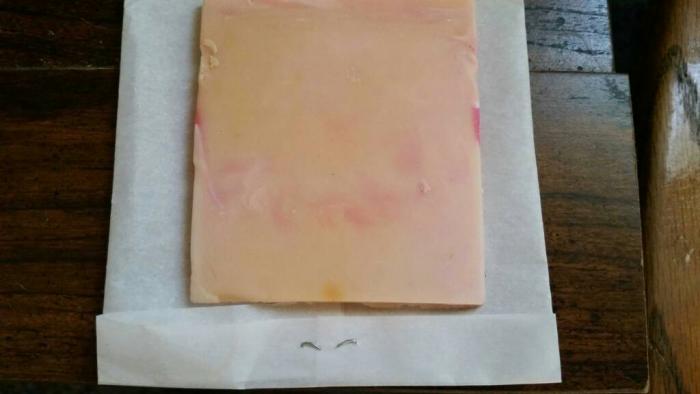 Here's another pic of the same soap, opposite side. In the bottom left corner, you can see the original color of the soap. The rest of the soap had a yellowish cast to it that has developed. 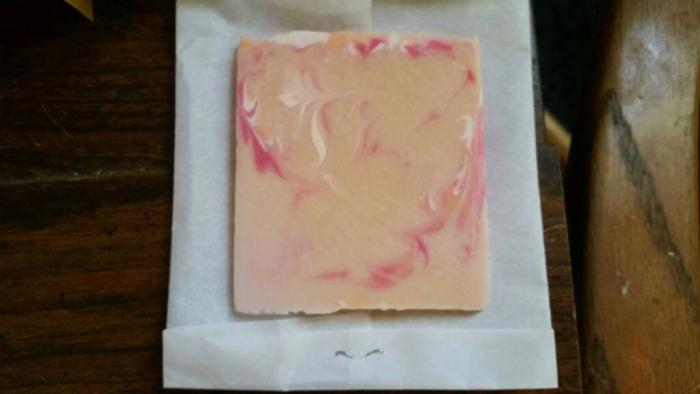 I think DeeAnna brought up a good point about the cause perhaps being an ingredient in the paper itself. I just did a search and there seems to be a handful of different treatments and/or coatings that are used to make baking papers. One that especially caught my eye was a substance called Quilon that contains chromium, which is a metal http://www.zaclon.com/pdf/quilon_datasheet.pdf

I don't know what your baking paper is made of, or even if Quilon could be a contributing factor or not, but I just throw it out there for discussion sake in case someone here might know more about it.