Anyone else watching the eagle cam?

A bald eagle's nest in Washington, D.C., one egg has hatched already, and the second is predicted to hatch some time this weekend. I've been leaving the screen up on my laptop, and checking in from time to time. Don't know if it's mom or dad on the nest, but they did stand up a while ago, and I could see the baby and the egg. The adult, who was very still for a long time, seems fidgety at the moment, maybe anxious to be relieved from duty by their mate, or maybe a sense that baby number two is getting ready to hatch? Anyway, it's fun to watch. This is a high def cam with great detail.
http://www.eagles.org/dceaglecam/

It was very interesting to see the exchange of positions by the adults. #1 had been on the nest for a while, and I could see it vocalizing, it appeared loudly, and I wondered if it had seen it's mate nearby. Sure enough, a minute or two later, #2 showed up. I thought #2 would be bringing food for the fuzzball, but not the case. #1 stood up, #2 settled over the fuzzball, and #1 flew away. Shortly, #2 stood up, and the fuzzball could be seen with mouth wide open. Then, #2 reached to the back of the nest and pulled out what appeared to be a small dead animal. #2 pulled little pieces from it and fed the hungry baby. After a few bites, #2 settled herself on the baby again, and before I knew it, #1 was back with a very live fish, dropped it in the nest and took off again. #2 is still sitting on the fuzzball, ignoring the fish. This is fascinating!

OMG...#1 just brought back a third fish...the nest is filling up fast! LOL

The second egg is beginning to hatch!

Oh wow! Thanks for this - we're keeping the computer on and our 8 year old is cheering for the babies!

lenarenee said:
Oh wow! Thanks for this - we're keeping the computer on and our 8 year old is cheering for the babies!
Click to expand...

Glad to hear that they're enjoying it. I keep checking back, and at one point a while ago, the one that's sitting on the nest now, stood up, and you could see that the second chick was starting to peck a little hole in it's egg. I thought that the parent would watch, but it seems that it's raining, because I can see water beading up on the big one's back, so that one has resumed sitting on the nest, to keep the babies dry. Hope the second one manages to free itself from that shell with the big one on top of it! Did you catch the other one dropping off the fish? Three fish in a short period of time...still wriggling...it's wild!

Saw the little fuzzy baby!! If eagles are like chickens it could take a day for the egg to hatch.

How does the baby get enough air with a parent sitting on top?

navigator9 said:
The second egg is beginning to hatch!
Click to expand...


1:20 pst, fed the eaglet!!! Still seeing movement in the unhatched egg so it's still viable!!!

Wow, I've never heard of this! I just saw a little baby and the small crack in the egg!

My old laptop is freaking out with the live video feed but hopefully it doesnt die on me! The fan is blowing extra hard.

galaxyMLP said:
Wow, I've never heard of this! I just saw a little baby and the small crack in the egg!

My old laptop is freaking out with the live video feed but hopefully it doesnt die on me! The fan is blowing extra hard.
Click to expand...

The egg is still early in its process, so maybe give your computer a couple hours break and come back?

Any idea why male and female bald eagles are identical? Are they the only birds like that?

Baby #1 is feisty and hungry! He/she just got fed, and you can see movement through the hole in the egg, of baby #2! 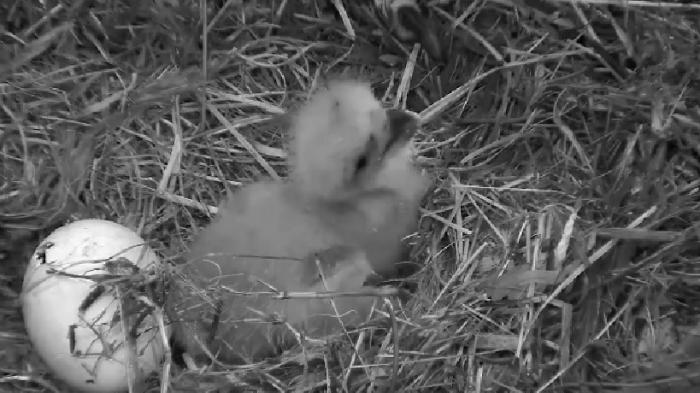 The Minnesota DNR has had an eagle cam for several years, so if you want another to watch:

The site is temporarily down right now due to electrical work, but should be back up by tomorrow.

And there's the world famous eagles at Decorah, Iowa: http://www.ustream.tv/decoraheagles

Whoever's on the nest this morning, mom/dad, woke up and is looking hungry, eating what I'm guessing is remnants of yesterday's fish. It looks like there's a big chunk of fish just out of reach of the sitter, but he/she won't move off the baby(s) far enough to reach it. The nest sitter is rearranging them self on the nest, lifting up just enough for me to glimpse a fuzzball beneath, but still can't tell if #2 is out of the shell. Apparently, both adults don't spend the night in the nest. Hopefully the other one will arrive soon with breakfast.

Eaglet #1 is naturally much stronger than #2, having a couple of days head start. #1 is able to hold its head up fairly easily to be fed, while #2 cannot. #1 is getting almost all of the food. I'm concerned for #2. Hope he/she makes it. This is my favorite pic so far.
© 2016 American Eagle Foundation,,EAGLES.ORG 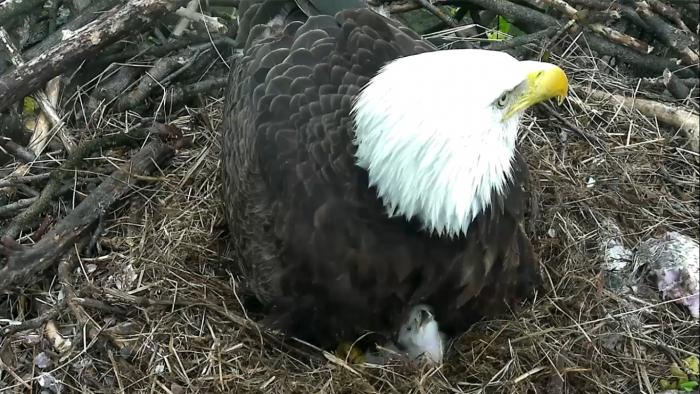 She's feeding them right now, 10:28 pst. The youngest is getting his fair share so far.

No adult on the MN eagle nest right now so you can get a good look at the babies - there are 3.