Hi.
Made a loaf bar recently and it's curing well. It's been about a week out of the mould. There are however about 3 small pockets of white soft 'fat' on the side. Looks like un saponified lard.

Attached are photos of the soap and my recipe. I substituted water for oat milk and added honey and mashed up oats at trace. I soaped fairly hot at about 60c.

Never seen this before and don't know what to search for on the forum, sorry. Yes, I'm aware it's gelled. 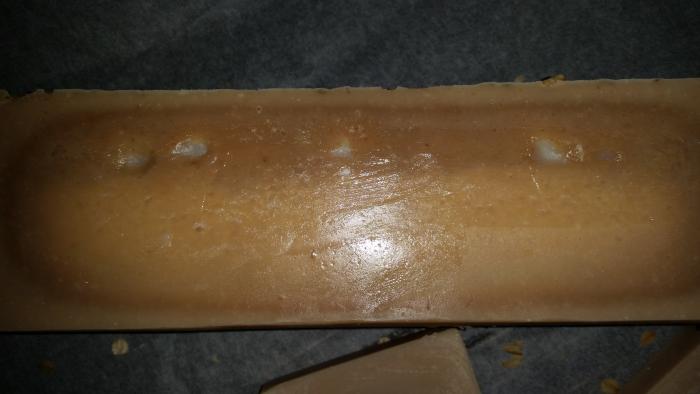 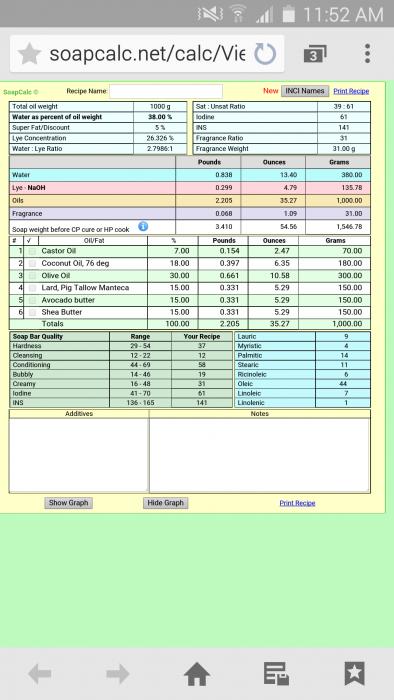 Tell us your soaping process (temp etc.) It could have been your lard/butters weren't kept warm enough and solidified and weren't mixed in well enough.
R

Ummm, mix both mixtures at 60c. Stick blended for ages cos it wouldn't trace, then popped in fridge for 36 hours roughly. Got it to a very light trace because my cheapo hand blender was burning out. I added quite a lot of honey. Would that have used up more lye so there was not enough left to saponify?

Could the oats have clumped?
S

You need to cut it and show us the cut pics. Hard to judge from a top shot.

Nope, not oatmeal. I almost guarantee it is lard. I have had this happen many times when my higher lard recipes overheat. Not sure why it happens but it seems like the lard separates during the overheating and just does not saponify. I soap lard recipes a little warmer than my normal room temp. I would love it it someone knows what causes it, but I have ended up with layers of un-saponified lard. Sorry to say you will probably find more pockets when you cut into it
S

Funny you should say that! I have a batch that I made 2 weeks ago that overheated a bit (sealed the crack back up with gloved fingers), and I have 3 white spots on top. I don't have any below the surface, so I was not overly concerned, but that answers that!
R

Well. As you said, it's horrid throughout! WTH!? I thought lye was supposed to 'destroy' lard? How can it survive such a harsh environment? Can I cut the lard top off and use the bottom bit? Will the lye/fat ratio be wrong? Would this have happened to palm oil? So many questions! 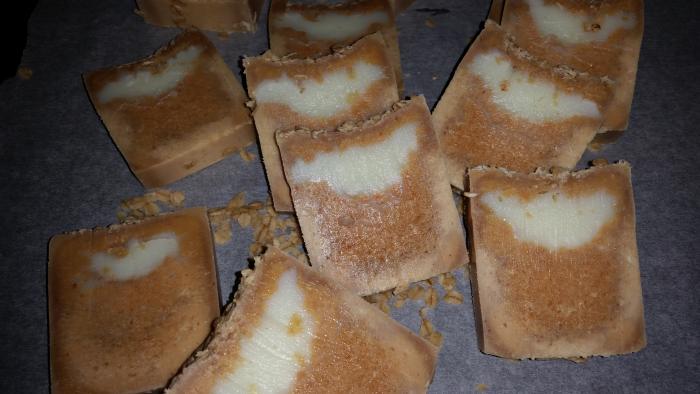 If it is unsaponified lard then yes, the lye to oil ratio would be off. However that doesn't necessarily mean the soap is ruined, it will depend on the superfat percentage, how much lard was affected (hard for us to tell from a picture, and how long your willing to let it cure. (a lye heavy soap eventually becomes milder if you give it enough time). But it sounds like a rebatch would be your best bet.

And don't give up on lard! Changing the soaping temp and working with the lye ratio can prevent that from happening again.

I soap lard recipes quite cold and have never had separation or any other issues. In the past year alone I used up 70 lbs of lard!
Last edited: May 11, 2016

I would smush it up and rebatch it, but that is what I do when it happens. Further looking at your picture it is much more advisable for you to rebatch it. I go through over 100 lbs per year and it does happen periodically. Soaping to cool can cause the lard to start thickening to fast giving what is called false trace. This can happen quite often when it overheats as this batch did. You can also see some separation in the darker overheated portion. The lard just shows up as smushy unlike an oil that separates into alligator teeth or caverns will run clear.
R

Thanks for the help. I'll try it again but cooler next time. It was a good learning experience. Definitely not what I was expecting to be my first failed batch. Does this kind of thing only happen with lard?

Don't let this turn you against using lard. It makes great soap.

I soap 95 F and never had it happen. Every, hm almost every my soap have lard/tallow

OK. My two cents on this. I am no expert by any stretch of the imagination. With very few exceptions, all of my batches use lard (at least 40% - some more) and I've never had this happen (yet, thank heavens). According to your post, you soaped hot (60 C which according to Google is 140 F). At that temperature, all of your lard should have been melted. You also say you got it to a "very light trace" and then "put it in the refrigerator for 36 hours." (1) Are you sure you actually reached trace and the hard oils hadn't cooled down sufficiently to start to resolidify? (2) Why did you refrigerate a recipe that had 63% hard oils?

I'm not trying to be rude or anything like that. I'm just blunt and say what's on my mind. Things go quicker that way. Anyway, I always let my soaps gel. In fact, it's when they don't gel that I run into problems. I cannot imagine not letting a hard-oil soap like that gel. But that's me and the way I make soap. I know you said you put in "quite a lot of honey" without defining what that amount actually was and sub'd oat milk for the water. Both of those would cause the recipe to be hotter than if you hadn't used them. However, if you covered the mold with plastic wrap (or a cardboard box) and put it on a cookie sheet in a cold oven, it might not have overheated and you might have gotten a fully saponified loaf. Then again, it might have overheated and volcanoed all over the place (which is why it's always good to use a cookie sheet). But, what do I know? I'm just speculating. No one else mentioned the fact that refrigerating it for 36 hours might be the cause of your "lard soap-ish thing." Refrigerating it slows down the saponification process, making it take longer and doesn't let the soap gel. So, that's my opinion. I think it was the refrigerator. BAD REFRIGERATOR!!!

Teresa has made some good points. Another issue to consider is that you had quite a lot of water in the recipe -- 26% lye concentration if I'm reading the fuzzy screen shot correctly. That much water put your batch at higher risk for trouble, especially since you added "heating ingredients" (sugars, oats) with a free hand. More water => more likely to gel and more likely to have emulsion failure if the soap gets fairly hot.

Try this recipe again, but choose the "lye concentration" option (not water as % of oils!) and set the lye concentration to something like 30%. Don't go overboard on the heating ingredients like Teresa advised. Just put a light cover on the soap -- no fridge, no insulation, no CPOP.

Ah ha. There in lies my inexperience! Soap calc is a complicated thing and half the time I leave what I don't understand. So I'll try the lye concentration now I know better. I put it in the fridge cos I added extra honey and didn't want it volcano'ING.
Thanks for all the new advice. It's really helpful.

A soap in the fridge (or freezer) can indeed volcano. A volcano is triggered by a too-fast rise in temperature in the center of the mold, because the soap itself is a good insulator. If the heat builds up too fast, the soap expands and water vapor (steam) forms from the heating, and then you get cracks on the top of the soap at best. At worst you get a volcano. The quiet cold air in a refrigerator or freezer around the outside of the mold cannot possibly provide enough cooling to in the center of the loaf to absolutely prevent this from happening, especially if you deliberately set the soap up to saponify too fast. If you really want to minimize the chance of a volcano, the solution is to add sugars and starches with a lighter hand to control the rate of reaction.
S

I agree with all the advice above. However, I think you did not get a true trace, then when you put a hot (and overheating) soap into the fridge, the lard simply rose to the top.
You must log in or register to reply here.
Share:
Facebook Twitter Reddit Pinterest Tumblr WhatsApp Email Link