Acid Rebatch – the most thorough & wasteful way to “redo” soap

Disclaimer: It doesn't become any less esoteric with my weird ideas to reïnvent the soapy wheel. It also doesn't become a short post, and I'll have to split it in multiple posts if only for the many photos I'll include.

I've called today's programme Acid rebatch. It is kind of a rebatch in the usual sense: we will start with soap, and the final product is a soap with the same fatty acid profile as the one we've started with – but that's about the things common with more practical and economical rebatch techniques like oven rebatch.

FWIW, this means that acid rebatching really has no practical use case, unless one can justify the fuss with some emotional (ir)rationale – or, like here, as a proof-of-concept FOR SCIENCE.

I gotta grab my morning coffee so I can enjoy both, looks like its gonna be a interesting read.

ResolvableOwl said:
a finicky technique that not everyone likes (just ask anyone making shave soaps from stearic acid).
Click to expand...

I'll present the technique alongside such an example. Proof-of-concept but also something emotional: Trying to refactor an Aleppo soap to smell less prominently of laurel oil. (Sacrilege!


Some time ago I've bought some Aleppo soap with 30% laurel (couldn't be bothered to buy laurel oil to make it myself, lol), and felt like this was the one to get my fingers dirty with. I chopped up coarsely (we'll see the revenge for my laziness soon). 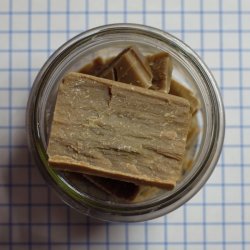 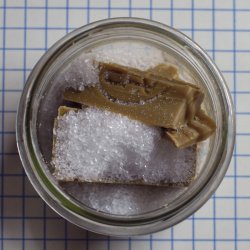 The rule of thumb for dosage: Use a soap calculator and enter the recipe. Each 4 g of NaOH will need 7 g of citric acid, plus some more to be on the safe side. Excess acid really doesn't matter. I've used citric acid because I have it at hand. Acetic acid (vinegar) would work just as well (just smell a bit), an so do hydrochloric or sulfuric acid if you have access to it and are willing to deal with the extra safety precautions.

Next: top up with some water. 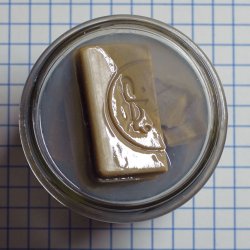 The acid will dissolve into the water and start its action: Grab the sodium from the soap (sodium salts of fatty acids) and exchange it for protons. This liberates the free fatty acids, and leaves anything water-soluble (sodium citrate, glycerol, salt) in the water phase.

I let it stand for several days, when I noticed that there are large chunks of unreacted soap left. 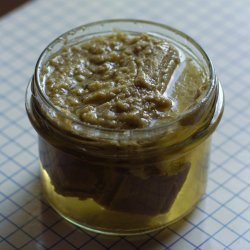 Heat, thorough stirring, time, and the threat of the stick blender did help, though.

Pro tip to my former self: Don't shy away from a cheese grater. It pays off.

For Aleppo soap, FFAs are mostly oleic, linoleic and lauric acid, so the FFA layer is expected to be a free-flowing liquid, at least above the melting temperature of lauric acid (44°C). Recipes with significant amounts of palmitic and stearic acid (Mp 63°C/69°C) will need much more conviction to fully separate.


Anyhow. Once there is a reasonable separation into a sticky, murky FFA layer, and a turbid, brownish-green aqueous layer, it's time to separate them. Not unlike rendering tallow etc., cold comes to a help for us – the FFA layer will solidify in the fridge (oleic acid Mp 13°C) to a waxy mass that we can easily scoop off the water/waste layer. 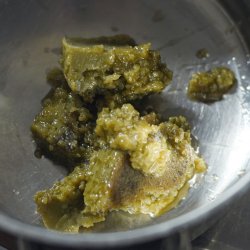 Lol, don't stress me out! I can only type that fast!

Okay. Now with the FFA in a pot, it's time to get rid of some of the volatiles (smelly stuff). I decided to sacrifice the kitchen air once again, for an open steam distillation. With the aim to remove a good part of the volatile compounds from the sump, not to reclaim it (like you would do to obtain EOs and hydrosols). I added some more water, so that it can boil off and carry volatile substances with it. 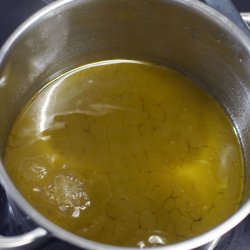 I can tell you, I avoided the kitchen for two days due to the smell that lingered there… oh well, I did it for science.

Now it was time to separate the FFA from the water (that still has found quite a lot of stuff to dissolve, and became dark brown). Separatory funnel time! 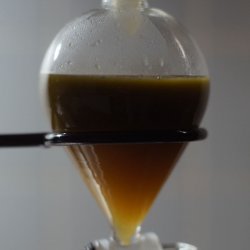 The water separates at the bottom and can be drained off through the tap. This is a really tricky step in soap recipes that contain palmitic and stearic acid, since the FFA might solidify within the separatory funnel.

I repeated this cycle three times: Add water – boil & stir – separate. With each round, the water was less dirty, and the FFA became less cloudy.
Eventually, I dripped the FFA into the pot without adding extra water, and heated it up to some 120°C. 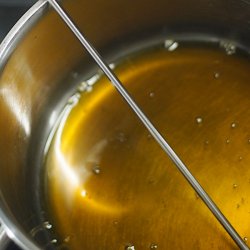 This evaporates the remaining few % of water that had been dispersed in the FFAs, and leaves us with a clear, brown “oil”. As far as my desensitised nose could tell, it still smelled strongly like laurel.

Time for the miraculous power of activated charcoal – this time not abused as a colourant, but as an attempt to adsorb some of the smelly compounds and maybe some of the brownish colour as well. 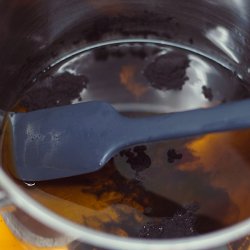 Filtering off the AC – still brown, still smelly. But a fair bit less of either IIRC. 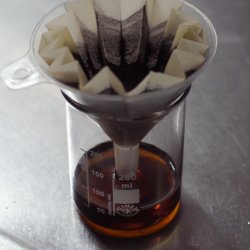 Over night, this solidifies into a light olive-brown, grainy mass. Compare this final “refined FFA” to the intermediate at the end of the last post (crude FFA). Much of the green has gone (to heat, acid attack, water vapour, AC), and the odour is a lot milder, comparable in strength to the soap I'd started with. Yield so far: 62.3 g 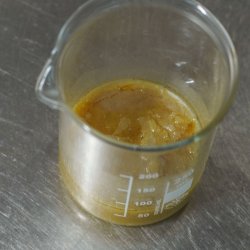 Suppose we know the original soap recipe. We have made the original soap by ourselves, with the help of a soap calculator, at 0% SF, and it came out non-zappy and passed the clarity test too.
Still, FFAs are not the original oils, so there is some math involved to find out how much lye we need to neutralise some amount of FFAs (even if we know how much we needed for the oils in the beginning). Plus, we want to replace the lost glycerol, at the rate that had originally been present in the natural soap.

(Chemists prefer potassium-based SAP, but soapmakers are more used to sodium-based SAP values, so I'll use them here)

Definition
SAP = m(NaOH)/m(oils) for complete saponification
m = M×n (molar mass times amount – I will ignore for now that oils are triglycerides, it doesn't make a difference, except that I'll use the unit [eq] for amount, not [mol])

In words: I need a bit more NaOH to neutralise the same amount of FFAs as I'd need for the original oil – due to the missing glycerol.
This apparent SAP increases. Not by constant factor, but this depends on the original SAP. The shorter the FA chains, the higher the fraction of glycerol in the initial oil, hence the more pronounced the difference between oil and FFA SAP is.

Glycerol loss
There is a neat shortcut to this one, that does not need to include SAP (hence independent of oil blend): three formula units of NaOH will liberate one glycerol molecule. So once we have the amount of NaOH, we can use this to trace back how much glycerol to add:
n(NaOH) = m(NaOH)/M(NaOH)
n(glycerol) = n(NaOH)/3
m(glycerol) = M(glycerol)/3M(NaOH) × m(NaOH) = 0.7675 × m(NaOH)

(Compensate if your commercial quality of glycerol is not 100% pure)

Now let's test this in practice!

For now, I've been relying on the manufacturers to know what they've done, as well as pertinent SAP tables/calculators to provide accurate values for olive and laurel oil, and finally: that my FFA is pure (water free) and my repeated steam distillation shenanigans haven't altered the FA profile too much to make a difference. We'll see in a moment how well this turns out.


How convenient that I have a 35.1% KOH solution at hand, with that odd concentration to be of equal strength to 25% NaOH. So I should theoretically need 5.734 g of this KOH masterbatch to neutralise the FFAs on point. 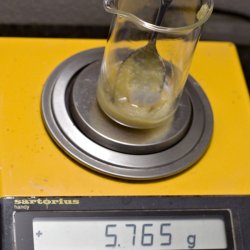 On top of this, I'll add the lost 1.1 g of glycerol, plus water ad lib to adjust the viscosity of this liquid soap that has been made out of bar soap. 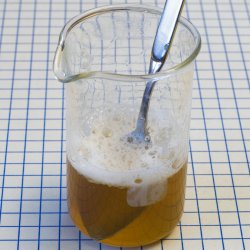 The reaction between the FFAs and the lye is an acid-base neutralisation, that liberates a noticeable amount of heat in relatively short time. Still I gave it a quick burst in the microwave to speed things up. In the end, the olive FFA forms high-oleic liquid soap paste in contact with KOH, and this is notorious for slow dilution.


Objectives of this sub-experiment:

Quick update/addendum on the LS: I've had it diluted just a bit too much and it's been very runny

. A few days later, sitting open to evaporate water, it's got to the “perfect honey-like consistency”, or

per my ultra-scientific emoji-based viscosity classification. I've weighed it, it's 45 g total, i. e. the equivalent of about 23% oils to start with.
For reference: the recipe has 58% oleic acid and 8% lauric acid, similar to a soap from about 85% olive + 15% CO. Just as another data point for the “dilution”/gel thinning properties of lauric acid in oleic soap gel.
Last edited: Dec 4, 2021

Hmmm. Sounds like a great deal of work, but I have this bayberry scented soap I hate....

Didn’t you mention something about having flatmates?

@Ugeauxgirl The Franklin soap? I can't remember that you mentioned at all how the myrtle wax smells. ETA: Sorry. Remembering user names (or, let alone, recognising avatars) is difficult…

@Mobjack Bay Not that I knew of

@ResolvableOwl no, the Franklin soap wasn't me. It was just a FO that I bought and hated. Beautiful soap though. I tried rebatching and adding something but they still smell terrible. Maybe they'll fade.

@ResolvableOwl where are you doing all of these cool experiments?

ResolvableOwl said:
@Ugeauxgirl The Franklin soap? I can't remember that you mentioned at all how the myrtle wax smells. ETA: Sorry. Remembering user names (or, let alone, recognising avatars) is difficult…

@Mobjack Bay Not that I knew of

No worries then! Stink up the kitchen to your heart’s content .
B