Cooked another batch of my normal receipe at the same time, and the coconut batch was still in the runny mashed potatoes stage when the other batch was already in the molds. Decided to hit it with the stick blender and did it to the lumpy mashed potato stage. Next thing I know, I have large clear lumps! Let those cook for another 45 minutes , they looked exactly like liquid soap paste and didn't melt.

I even checked my lye to make sure I hadn't grabbed the wrong lye and realized I used the same bottle in the other batch (which is fine) so that can't be it. Checked my coconut oil, it's definetley coconut oil (sniff test and stuck some in the fridge to cool it down and see if it solidified). It's the 70 degree, not the 90 degree type. Checked my crockpot, no problem there. Decided to add some water to try and salvage the batch. Added water and broke lumps up until I had a translucent paste and then molded it.

The next day, the batch was still yellow clear and rubbery! Managed to get it cut up and out of the mold. As it sits it's turning the normal white and harder but I can feel the rubbery part in the middle of the bars... it lathers fine but what on earth did I do wrong???

Picture is after 24 hours out...you can see it turning white in sections. It's all white now but I can feel the middle is still rubbery. No zap so it's not lye heavy....my scale is plugged in so no worries of a low battery. Too much water if I mismeasured shouldn't lead to clear (Pretty sure I did not mismeasure). Something wrong with the oil means my other batch should've done weirdness (it's 15% coconut) at least a little. 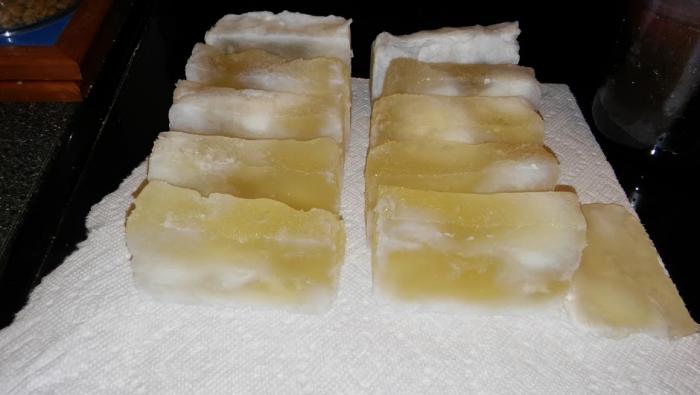 100% CO is a different beast. I can't exactly explain what caused your soap to look and feel the way it does, but check out the discussion in TOMH's recent thread if you haven't already.

There's some kind of transformation of crystal structure happening there as it turns from translucent to opaque white, but how you got that weirdness might be a matter of blind luck. If you can make it happen again, give us instructions.

Reminds me a little of working with hardened oils in candlemaking. They can be very sensitive to cooling rates and shear forces like stick blending, and they are always changing from one crystal form to another, which affects color, melt point and other things.
J

Something Like this happened to me when I made shaving soap once. For me, it was an overcook. I basically boiled too much water out of the soap and large parts of it went clear and rubbery.

They whiter patches, I think have a higher water concentration and look and feel more like soap, whereas the clear sections are devoid of water and come off like that.

I put my shave soap back in and cooked it a second time, adding water until it became a white paste again (my shave soap is soft and pliable, so that may not be an option for you)