Last night I made soap. (yay! masterbatching is AWESOME)

I put it in the oven and turned the oven on to about 125 or so. When it reached 125 I left it on for 5 more minutes, then turned it off and went to bed. 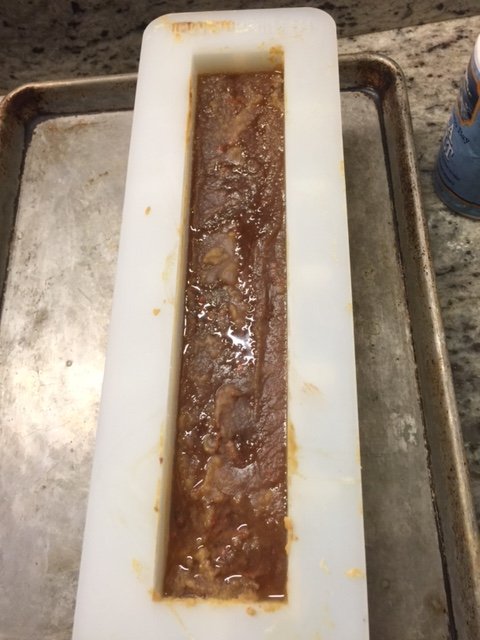 I hate to mention this, but it looks to me more like separation in the mold due to emulsion failure especially if the soap temp is just warmish. Gel is going to be quite warm to the touch.

I was going to say what DeeAnna just mentioned. I am guessing there is a separated cavity in the middle. Hopefully I am Wrong...

Wondering the same. I've had it happen and it's not fun. Hopefully we are wrong.

Looks like separation to me as well, major bummer!

A while back, after many years of soaping, I had my first separation with oily pockets on top. See pic below. It didn't look exactly like yours, but there were pools of oil on top. You can see the ph strips I used to check if it was lye heavy...not. So I came here for help, and was told to stick it in the crock pot til it gelled, then dump it in the mold. It worked like a charm for me, so if that's what it ends up being for you, there's still hope. 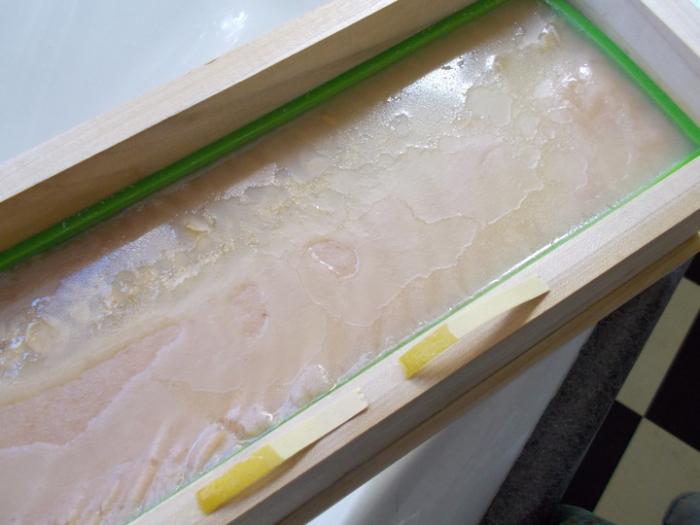 Yeah, I think there may be some separation, there's a bit of liquid on the top. We'll see if it's a bad separation or just a minor one.

Temperature of the soap was pretty warm, though. I know it hit gel last night before I turned off the oven, the soap was more than "warmish". Not scalding hot, but quite toasty!

We need to add these technical terms to our soap dictionary - warmish, toasty, etc.

ETA - I'm planning to unmold it into a glass casserole dish so if there is separation it call all go into the crockpot.

I think you are absolutely right that the soap did gel last night. Just not sure that's what you're seeing today.

Speaking of warmish vs. toasty -- I could use a little warmish weather today -- the day is cool, clammy, rainy. I'm starting to think Iowa has been secretly moved to the Pacific Northwest!

DeeAnna said:
I hate to mention this, but it looks to me more like separation in the mold due to emulsion failure especially if the soap temp is just warmish. Gel is going to be quite warm to the touch.
Click to expand...

If this is the case that means it didn't reach emulsion when it was being mixed, is that right? It wasn't caused by overheating in the oven?
Last edited: Sep 13, 2016
S

Originally Posted by DeeAnna
"I hate to mention this, but it looks to me more like separation in the mold due to emulsion failure especially if the soap temp is just warmish. Gel is going to be quite warm to the touch."


penelopejane said:
If this is the case that means it didn't reach emulsion when it was being mixed, is that right? It wasn't caused by overheating in the oven?
Click to expand...

That is exactly what that means.

That does not mean that that was exactly the cause, just that that is what DeeAnna thinks is the cause. (I am not saying that DeeAnna is wrong, just that I hope dixiedragon is going to post pics so that we can all see what happened. If it is emulsion failure, then I will learn what that looks like also.)

My incident happened when I tried making a much bigger batch than I usually do. I made it in a huge stock pot, instead of the smaller one that I use for most batches. I think what happened was that the pot was wider, and the batter was deeper than I was used to, and I thought that I had everything well mixed, but obviously I did not. I thought I was saving myself some time by making that huge batch, but it was nothing but trouble. The pot was super heavy to lift, and a bear to try and pour without spilling. I learned several lessons with that batch! Good luck to you with yours. :-D

Susie is right -- It's all guesses at this point. I don't know the real reason for the problems with Dixie's soap anymore than you do. Just making educated guesses.

"...If this is the case that means it didn't reach emulsion when it was being mixed, is that right? It wasn't caused by overheating in the oven? ..."

If it's an emulsion failure, the cause could be either or both of these possibilities. I'll try to explain --

Emulsions can be temporary or stable.

Temporary emulsions will last for a while but quickly separate back into two layers. A temporary emulsion happens when you shake a container of vinaigrette (oil + vinegar) salad dressing. If you don't shake really hard, the ingredients have the annoying habit of separating while you are pouring them onto your salad. In soaping, briefly whisking or stick blending the lye solution and the fats together forms a temporary emulsion. If you stop mixing, the emulsion will separate back out into a fatty layer and a watery lye layer.

A stable emulsion is one that lasts sufficiently long without having to continually mix the ingredients together. Some kind of chemical interaction is needed (as well as mechanical mixing) to make a stable emulsion. If a vinaigrette contains egg or mustard, these ingredients act as a chemical emulsifier to keep the dressing together sufficiently long enough to dress and serve a salad. In soaping, as the soap batter starts to saponify, the newly formed soap particles act as the chemical emulsifier. The new soap keeps the fat and lye solution together sufficiently long enough for the mixture to saponify into a solid loaf of soap.

Emulsion failure can be caused by two general problems.

One is when a person thinks a mixture is at a stable emulsion, but it really isn't. This can happen in soap making when a person stops mixing at the emulsion stage (before obvious trace) but happens to stop mixing just a tiny bit too soon. Or it can happen if a person sees "false trace" when using a recipe high in solid fats. In "false trace", the solid fats have cooled enough to start solidifying and thicken the batter -- just like putting shaved ice into a margarita. This is not an emulsion, but the thickness fools the soaper into ~thinking~ the soap is emulsified. This thickness magically disappears as saponification gets going and the fats warm up enough to melt. (Or the ice in your margarita melts because you're not drinking it fast enough!)

The other way an emulsion can fail is when something happens to a stable emulsion to "break" it. Emulsions can fail if you add ingredients to a finished emulsion. For example, if you are getting to the bottom of a bottle of hand lotion or hair conditioner and add some water to loosen it up and get the last bits out, sometimes the texture of the product will change and can even look a little like a curdled gravy or "broken" egg custard. You have destabilized a once-stable emulsion by adding water.

Heat can destabilize an emulsion. If soap batter becomes too hot early on, before saponification gets going well, the tiny droplets of fat in the stable emulsion can coalesce into larger ones. As the fat droplets get bigger and bigger, they can separate out of the lye solution and start to float on top of the molded soap. Even though the emulsion was stable at lower temperatures, it's obviously not stable at higher temperatures. It's been "broken" by too much heat.

(1) The recipe contains a high % of water (low lye concentration). More water in the batter makes the fat-lye-soap emulsion less stable. (2) The batter is poured into the mold when it is at the point of emulsion or light trace. The thinner the batter when it's poured into the mold, the easier it is for the emulsion to fail. (3) The soap quickly heats up a lot in the mold either by going into a hard, fast gel all on its own or being heated or insulated too much by the soaper. Too much heat too soon in the saponification process increases the chance for a destabilized emulsion.
Last edited: Sep 13, 2016

^^^^
Thank you for this detailed explanation, Deeanna.
D 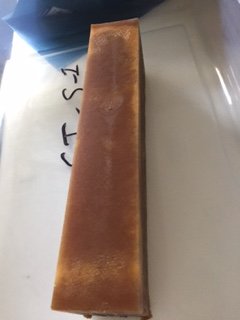 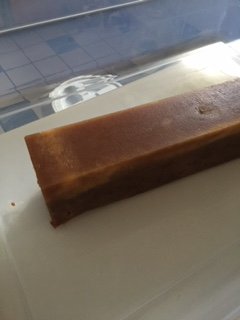 Sliced pic! I used an idea Dorietta suggested - I took some shreds and heavily coated them in mica. It looks really good! This mica is Sienna Shimmer from BB, I got it on clearance. it is normally very blah in CP, but this technique let me get enough mica on the shreds to be very pretty and shiny! 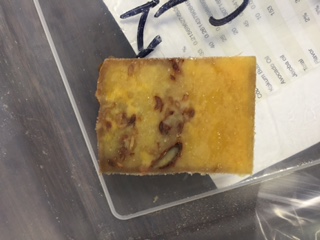 Deeanna thanks for the interesting information!

I would have expected this soap to be MUCH harder - it gelled for ten hours, then sat for 24 hrs (I cut it this morning). But it was no different from my regular soap.
S

That is some pretty soap! I am so glad it turned out well.

dixiedragon said:
Sliced pic! I used an idea Dorietta suggested - I took some shreds and heavily coated them in mica. It looks really good! This mica is Sienna Shimmer from BB, I got it on clearance. it is normally very blah in CP, but this technique let me get enough mica on the shreds to be very pretty and shiny!
Click to expand...

I'm so relieved to see the unmolded & cut pics! I was worried you would have to HP to save it. Also glad to see the soaps shreds coated in mica worked out. What FO did you use?
D

I've decided I'm in love with fig scents. I NEVER order them because I don't care to eat figs, I think they have a weird texture - spongy and gritty at the same time. But the few fig FOs I have I realize I really REALLY like!
You must log in or register to reply here.
Share:
Facebook Twitter Reddit Pinterest Tumblr WhatsApp Email Link